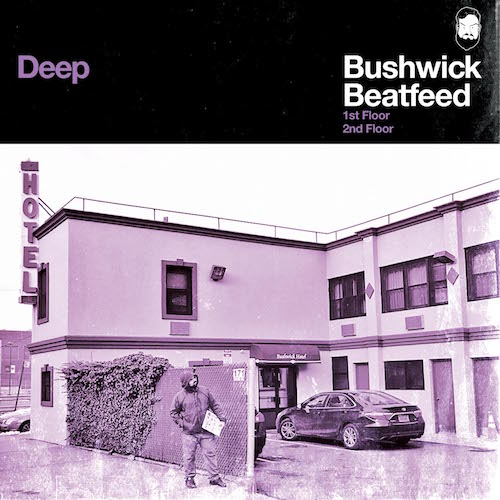 I've come full circle to the album I originally thought I was reviewing back in April -- Deep (of the 2 Hungry Bros.) and his "Bushwick Beatfeed" album. As with the last project this is an entirely instrumental album dedicated solely to showing off what Deep can do as a producer. Come to think of it that may be overstepping the bounds in terms of describing this project. It's not SOLELY dedicated to Deep showing off his skills. There's some genuine headnod to be had just from listening to quality hip-hop instrumentals, and if you're the kind of person who is inclined to freestyle when you hear a dope beat ("I got a DOPE BEAT!") then Deep has given you nearly an hour's worth of Christmas come early.

One thing that should make it abundantly clear Deep is not just another bedroom wizard cranking out beats with a sampler, a laptop and a few keyboards is the fact there are MUSIC VIDEOS for some of these songs. Ordinarily that wouldn't make sense right? Where's the emcee to wander around in front of the camera lens, telling you his/her story in a visual portrayal of what was previously the audio narrative? If you'll pardon the pun though Deep is trying to dig a little deeper than that. Instrumentals are storytellers too, and the great ones tell stories even without an emcee - "They Reminisce Over You," "Concerto of the Desperado," "Passin' Me By" just to name a few. By creating visuals for tracks like "Breakers Yard" we get to see Deep's story too.

Okay so we know that like Kool Keith he'll get in shape and do his physical fitness -- that's important when you're a hungry brother who likes to eat. What about the other end of the spectrum though -- when you're done with a long day of work (or working out) and you just want to kick back and chill? Then take a once in a blue moon break with "Bluemoon Dog Rex" and get together with all of his peoples at the cafe, before stepping back into the lab to get back to work on more hits. That's the type of s--t he's on, word is bond. Deep wants to create instrumentals that play in your head like music videos. The weight of "Gravitas" strikes me immediately. This would be a somber scene - it's like Timberland boots stomping through a graveyard on their way to a fistfight. It's dark and foreboding and it puts you RIGHT THERE in that moment. It's like a classic Mobb Deep track in that it's beautiful in its brutality. The whole gamut of feelings and emotions is covered. "Mak Magic" is so bouncy and uptempo I feel like it could spin off my headphones at any moment and whirl into its own vortex - until about a minute in when Deep "makes magic" and completely breaks it down - then he lets it fly off the handle again. "Pasteles Grind" gives you that feeling it's on in the background as a family prepares dozens of pasteles at a time for everybody to eat on a major holiday. It's a beat to put you to work. And though the title might make you think it's "heavy metal for the black people" and more of that Mobb Deep steelo, "Sabbath Alarm" is more literal than that - it's a song to wake yo' ass up and get you to put on your church clothes. This is the reason why Deep is a brother to keep your eyes on. He could make throwaway beats for emcees to blow up the charts with, but here he is carving out his own identity with virtually no help, establishing moods and telling stories with his tracks all on his own. From "Beaver Park" to the "Block of Ages" he's taking you on a journey through Bushwick all on his own.