De La Soul :: For Your Pain and Suffering :: Kickstarter
as reviewed by Steve 'Flash' Juon 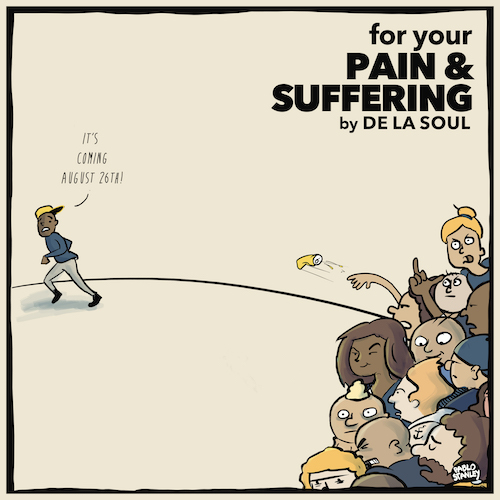 The De La Soul Kickstarter campaign hasn't been without its share of frustration and controversy. The group asked for fans to back them to independently put out a new album, and over 11,000 members of the De La Nation responded enthusiastically to the point they vastly exceeded their original $110,000 goal. In fact they launched the project on March 30th of last year, were fully funded a day later, and by the end went a HALF MILLION past their target. That's great right? That should have made releasing the new s--t by their original September 2015 deadline easy peasy nice-n-easy.

As with a lot of Kickstarter projects though that deadline came and went without anything being delivered. Sometimes the people who set up a campaign are overly ambitious about how quickly they can get things done. Other times the crowdfunding is little more than a "fund my lifestyle" session where the people who hit their goal start enjoying that large bank deposit and stop worrying about delivering the product they promised. In a few unsavory cases the people who got Kickstarter funding never intended to deliver a product AT ALL and everybody got duped.

Now De La Soul has been in the game long enough to have built up some "benefit of the doubt" in the bank. They're hip-hop legends, straight up. Pos, Dave and Maseo are probably the only artist I've seen in concert more than three times other than Mega Ran. Their catalog of classics is almost impeccable, and after a career that spans four decades they STILL want to make us more. So we all sat and waited patiently. I waited patiently. I didn't get in early, my backer # is in the eight thousands, but I got in there. I've been waiting too.

"For Your Pain and Suffering" is an exclusive Kickstarter release for those of us who have been anticipating the new album since March. It's their apology for all of the delays that led up to this point. Unlike the Kickstarter con artists who take the money and run, De La has been incredibly forthcoming about what went wrong. Samples took forever to clear. Guest artists had to be signed to contracts for their appearances, and the lawyers at their record labels dawdled and stalled. Finding a director to film videos added more delays, but since the fans overpaid by leaps and bounds, they also DESERVE more than just the music. It all takes more time than they imagined, and they're hugely sorry about it, so this four track EP is what we get until the album officially and finally drops for us on August 26th.

I say "four tracks" because "four songs" would be inaccurate. The entire first cut called "The Devil Likes Candy" is a skit/interlude that sounds like it's straight out of the De La Soul Is Dead era, and it's amusing and all, but that knocks two minutes off the 13 total. Sandwiching the other end of the presentation is another skit called "Schoolyard Studios" that's four minutes long. What you're left with in terms of actual music is "TrainWreck" and "Beautiful Night" featuring Dave West. Six and a half minutes of music. We get the rest in three months.

That's not the only problem though. De La Soul has asked the backers to "be stingy" with this release, so even though it's an incredible cocktease to say this, I can't offer you any audio samples from "For Your Pain and Suffering." As such I'm going to take the unusual step of NOT scoring this album. With only two actual songs to go on there's really not enough to score anyway. Now the two tracks that are actually full length songs are up to par for De La, and if these are the leftovers that weren't good enough to make it onto "and the Anonymous Nobody..." this summer's going to get WRECKED by a hot new De La Soul release. "Beautiful Night" in particular makes me wonder what sample or facet of the song just couldn't get approved before the final release. It's a tight track. It's a fully mixed down ready to go song that probably needs to be the B-side of a single just for those fans who didn't get this Kickstarter exclusive EP. My final word to De La is this - get that s--t done. I mean the B-side AND the album. Get that s--t done because we're still waiting.