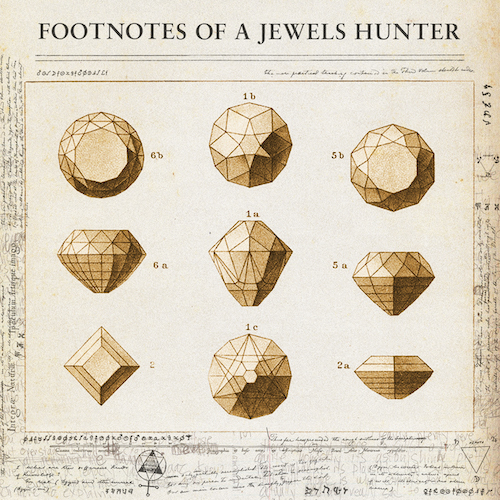 At over 80 minutes long I had a lot of time to ponder who Jewels Hunter reminded me of and what "Footnotes of a Jewels Hunter" sounded like. After a while I started to grab hold of the vocals and found it to be a mixture of the intelligence of Sage Francis, the deep baritone of R.A. the Rugged Man (sans the gruffness), and the humor of Serengeti. Considering these are all emcees whose albums I enjoyed over the years, the ingredients were all there for Jewels Hunter to succeed. Could he "Top Chef" it up and create a tasty dish with them?

Well I had to suspect he would even before I finished "Footnotes," just because Galapagos4 generally doesn't tend to work with whack rappers, but even so I was a bit surprised by Jewels Hunter just because he was a totally unknown commodity. I couldn't expect a guy I had never heard from before to be able to hang with Illogic on a track, but he's right there with him bar for bar on "The Resistance."

Jewels has one of those flows that's deceptively monotonal. At first you get the impression he's medicated, stuck on an even keel that he can't break out of because his dopamine levels are artificially regulated, but then as you get deeper into songs like "What You Here For" it becomes more obvious that he's a boiling cauldron of discontent, and what he's doing is trying and beautifully failing to hold back. It seeps into his bars and you can't avoid his frustrations nor would you want to.

"It takes patience, dedication and an open mind
A whole lot of love, revelations of the heart inside
It's hard at times to focus, when the game of life just has you down
But still I persevered through all the years until I reach a crowd
What you really here fo'? Will you try and make it work
or fold under pressure? Many try and come up short
How will you react, what will you do, will you lose control
or will stay grounded through the madness and meet all your goals?"

I'm a sucker for introspective emcees who take stock of their situation and simultaneously encourage other artists to do the same. Jewels is ambitious without being egotistical, and both his name and his album title exemplify that he's SEARCHING for jewels so he can drop a few gems in his bars. "My true love is all of y'all, without y'all I don't exist/So I persist to try to be the change I want to see/embrace you when I can and know one day you'll do the same for me." Those sentiments on "Friends & Fam" featuring Dice shows he has hope but that he's not naive to the reality of the world, encouraging both himself and his listeners to "respect ourselves and put our children first."

After hearing one thought provoking team effort after another on "Footnotes of a Jewels Hunter," like "Lazarus" featuring Illogic again along with Randy Hansen, "Driftin'" featuring the long missing L'Roneous Da Versafier among others (where the HELL did he go), "Annotations" featuring Qwel and "The Scroll & Blade" featuring Qwazaar it's clear that his peers respect Jewels Hunter, which makes it all the more odd to me that I'm not able to place Jewels as an emcee at any point before the release of this CD. He also deserves his respect as a producer - Maker laces 11 of the 23 tracks and Jewels does the rest - and you'd be hard pressed to say where one ends and the other begins. They are on the same level here and neither one is turning in whack shit. Even Jewels himself admits that it's odd he isn't better known for his work at this point.

"Over the years, for one reason or another, most of what I've made has gone under the radar or just never got put out to begin with. Every musical piece that I produced on this project is already years old, only the lyrics are new."

It's remarkable. I don't know what caused him to wait so long but I'm glad he's not waiting any longer. This 80 minutes flew by.