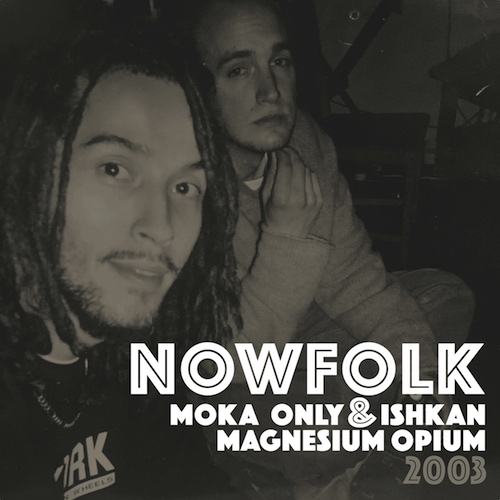 I had a whole intro written in my head about how I was ending my URBNET hiatus and returning to form with yet another Moka Only album, but the moment I heard "Put It On" I threw all of that out the window. The song unapologetically uses the exact same RAMP "Daylight" sample that A Tribe Called Quest used on "Bonita Applebum." When I say "unapologetically" I mean that Moka's rhyme partner Ishkan actually references a classic line from Q-Tip and rewords it a bit: "So far, I hope you like our song." At that point you can't even knock Nowfolk in any way -- you have to give it up to them for paying homage and respect to the Tribe.

But who are Nowfolk, and where did "Magnesium Opium" come from? Both are interesting questions. Ishkan was one of the prolific Moka's many partners in crime over the years, and the two had already recorded two albums together under the name Moniker in the late 1990's and early 2000's. (Side note - I need to track those down.) Apparently they did a third album that by Moka's account just didn't represent what they felt they were capable of, so they shelved it and started recording THIS album under the new name of Nowfolk. Unfortunately Moka's ADAT bit the dust, and with no way to retrieve the sessions they had recorded yet another album from the two wound up unreleased. A few years back when Moka got a new ADAT he went back through his old tapes and put this Nowfolk album back together again piece by piece. Unfortunately it doesn't seem that Ishkan has a social media presence, as all attempts to track him down lead me back to URBNET or Moka. I'm digging the vibe the two have as a unit though, which coincidentally or not is some very Tribe vibe musically and lyrically. Obviously the vocal tones are not the same. Moka's a little bit like The Abstract in terms of his laid back mellow confidence, but Ish sounds nothing like the hyperactive high pitched Five Footer (may he rest in peace). He's actually got a very deep and bassy flow, and I'd almost say he'd sound at home on any Southern rap album. It's more about the chemistry the two have with each other in naturally complimenting their partner's vibe, and the fact the tracks they rap on have a generally jazzy sound and style. And make no mistake about it - tracks like "Yeah Yeah Yeah" are tailor made for boomin' in ya boomin' in ya boomin' in ya Jeep. This album is a curious artifact given it was recorded long enough ago to be a Back to the Lab review, but because it never saw the light of day before 2016 it's all brand new. What's more telling is that even though it's 13 years old it doesn't sound dated. Okay so it doesn't have the singing and AutoTuning that is so prevalent in commercial rap in 2016, but since when has Moka followed trends or tried to be overtly mainstream anyway? If he didn't tell you himself that this album was from 2003 you really wouldn't notice and I think as praise goes for "Magnesium Opium" I can just leave it at that. Music Vibes: 8 of 10 Lyric Vibes: 7 of 10 TOTAL Vibes: 7.5 of 10