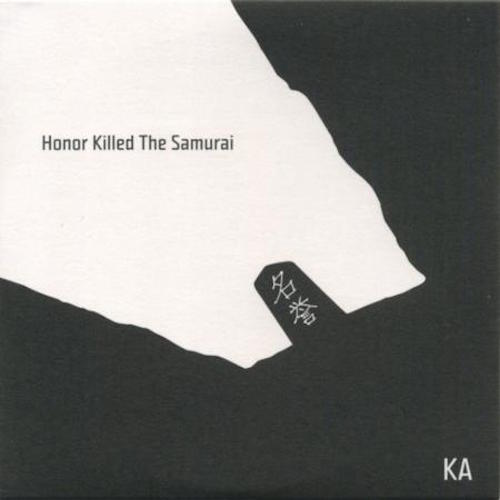 Brownsville rapper Ka isn't one to waste words. Over a career that started decades ago but has really gotten rolling with the release of his first solo album in 2008, Ka has taken the cold-blooded street raps that Nas and Mobb Deep perfected in the 1990s to new levels of sparseness and focus. "Honor Killed the Samurai," his fifth solo effort, is more of what makes Ka such a singular artist.

Ka's music sounds like it was recorded late at night, alone. He has a day job saving lives and whatnot with the FDNY, he doesn't tour much or play live very often, and he doesn't depend on album sales to make a living. He makes music by himself and for himself, with zero attempt to do anything that might garner more attention, get more sales, or even put him more on the hip-hop map. It gives his music a sense of intimacy and separates it from almost any other rap music out there. Ka is laser focused on writing the most intricate, realest street raps he can. He seems to be answering the question, "What would happen if the GZA spent five years meditating in a monastery in silence, and then dedicated his life to writing the perfect song?"

Contrary to a recent New York Post hit piece on him, Ka's lyrics may be about street life, but they do not celebrate crime and violence. While elements of his lyrics may be biographical, they feel like characters he is creating to tell stories of protagonists caught in a life of crime who are trying to keep a sense of honor. He never forgets how desperate and doomed the players in his songs are. "Just' begins, "Can't be a pussy in a dogfight/And the law don't forgive what the Lord might." At the chorus the protagonist exclaims "To get what we need we did what we must."

On "Conflicted," he raps:

"Mommy told me be a good boy
Need you alive, please survive, you my hood joy
Pops told me stay strapped son
You need the shotty, be a body or catch one"

As the title suggests, many of the lyrics on "Honor Killed the Samurai" are inspired by Japanese samurai culture. Ka treats the New York street toughs in his rhymes like samurai warriors trying to adhere to a system of honor. The album is full of samples from movies about samurai, and many of the beats seem to sample samurai soundtracks.

Even when Ka brags and throws shade, he does it in a subdued and precise way. "$" criticizes the materialism of some rapper, with Ka proclaiming, "Watch me blueprint rec centers/I'm trying to inspire." Ka's version of flossing is stating "Can battle hard against catalogs with one leafy journal." "I need money, not to bling, self-boast or greed reasons," he raps. "But to bring health to the most diseased regions."

With it's samurai movie samples and narrative of the struggle for redemption, "Honor of A Samurai" has a cinematic feel to it. Like all of Ka's work, it is a quiet album that requires attention. He never raises his voice, there are no sung hooks, and there is nothing here that you could dance to. I find myself listening to it in the early morning, when my coffee hasn't quite kicked in and I don't want anything too loud or energetic. All of which is a polite way of saying that some people might find "Honor Killed the Samurai" kind of boring. Those people are wrong, but it isn't an album that jumps out at you. It's an album that is all about skill and deliberation, and maintains Ka's rep as one of the more unique voices out there.