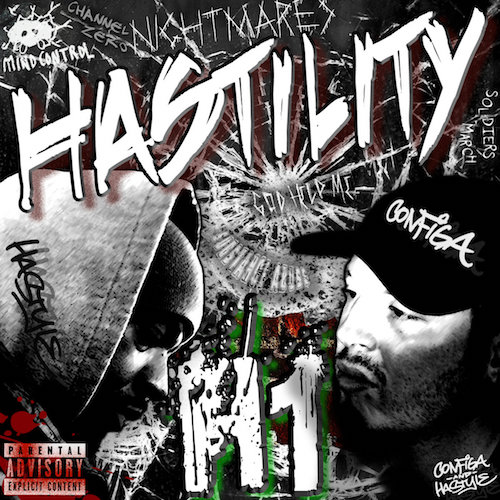 Making collaborations in hip-hop is pretty much a frequent time-honored tradition. Whether it's a two-man partnership or forming a large collective, the prospect of artists combining skills for an album is always intriguing. The team of Configa and HaStyle is unique in the same sense as Phonte Coleman and Nicolay; as well as Buckshot and P-Money: It's a foreign collaboration that extends across the ocean. HaStyle hails from Queens while Configa is a UK-based beatsmith. Though not their first time working together, this is, however, their first joint full-length LP. What brings them together is that they share an affinity for the same hip-hop aesthetic: '90s boom bap.

"Hastility" appears to be a concept album, focusing on hostility. With influences ranging from Public Enemy to Nas, HaStyle takes the role of a street reporter. He's both the journalist and tour guide to the modern hip-hop era and the urban landscape, with a clear lamentation for it considering his admitted Golden Era upbringing. He's got a slightly raspy voice backed by a versatile effortless flow. Configa's a sample-based producer, having a penchant for dusty instrumental breaks and quirky sampled dialogue reminiscent of a 1989 Prince Paul. With similar styles, the overall effort is something of a homage to the east coast hip-hop from the '90s that had a bent towards lyrical skills combined with social commentary.

With twelve tracks and just a shade under forty minutes, the length feels shorter than the actuality. Stylistically, the album starts to shift somewhere in its second half. The title track, "Hastility", begins as a sample collage of turntable-scratched lyrics for nearly a minute. Then the menacing-base heavy drums drop and HaStyle tears right through the beat. That track appears during the first half of the album, at which point he includes the first of two collaborations with New Jersey emcees. "Mind Control" features Artifacts member El Da Sensei. Over Configa's cinematic funky production, HaStyle waxes lyrical about the methods and lengths that a ruling government will go just to maintain control. El's verse is brief, but his flow is a welcome change.

The album takes a slightly darker turn starting with "Nightmares". Comparing the violent climate of the real world to his dreams over some sinister strings, the track is followed by the second New Jersey team-up, "Soldiers March" featuring Chino XL. Essentially a lyrical war expose on the current plight of American soldiers in war, Chino's verse reminds me Eric B. & Rakim's "Casualties of War". He uses war metaphors and a soldier's first-person perspective as both commentary and a description of his lyrical skills. Configa adding the marching of soldiers' feet was a nice detailed touch. The hostility concept shines on the interlude "Steven Fox (Skit 1)", satirizing major label A&R's who'll say anything to sign popular underground rappers.

The last three songs continue the social commentary theme. On a bluesy guitar sample-driven beat, HaStyle spits several different narratives about the dangers of "Substance Abuse". A lyrical discourse of the state of the world over a sampled choir beat comprises the appropriately titled "This World". A remix of "World War Rap" features Prince Po from Organized Konfusion, with both emcees going to town over aggressive production.

The album carries an air of nostalgia that deliberately flies in the face of mainstream hip-hop and that's sure to polarize mainstream listeners on the off-chance that such audience ever gets their hands on this. There were some areas of the album where it became topically redundant, but it wasn't a bad listening experience on the whole.