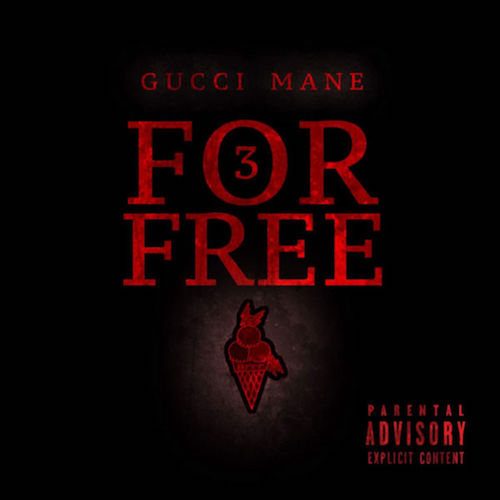 The appeal of Gucci Mane as a rapper is nothing if not dynamic. Despite its consistent pitfalls, the release of "3 For Free", just weeks after Gucci dropped his tenth studio album "The Return of East Atlanta Santa", is a telling signal of this dynamic nature.

"3 For Free" is just as simple as its title suggests: three average length tracks consisting of Gucci rapping casually over splintered beats by Atlanta producer Shawty Redd. The concept is simple, the rhymes are simple and while the beats may be layered in some respects they too are still quite simplistic. This project may even seem rushed to many listeners who are not familiar with Gucci, and this is an understandable feeling to have. "3 For Free" is not so much rushed, however, as it is typical of Gucci's style of record mass production.

This style certainly shows its weaknesses. Each of the three songs on this EP lacks any significant lyrical depth, skill or even notability. To make matters worse, Shawty Redd's production is riddled with overly-basic drum lines and bass booms that do little to satisfy the eager ear (although there is a moment or two on "Sir Brix A Lot" that deserves a nod to Shawty Redd).

The EP begins with the stale flavored "Ever", a track dedicated to Gucci's past days of selling drugs, dodging the feds and acquiring revenge on his enemies. The themes and lyrical quality of "Ever" are best summed up in the dreary line "I killed your dog yesterday, you can call me Mike Vick." The problem with this reminiscing on a beat is that we've heard it from Gucci literally hundreds of times and that quite frankly Gucci isn't the most compelling story teller out there. The other two tracks, "Wasn't me" and "Sir Brix A Lot" are quite similar to the opener except they seem to take place in current day Gucci's life as he repeatedly proclaims that he is out of jail and ready to go while dishing out lines like "A pocket rocket on me and a pocket scale man" from "Sir Brix A Lot".

Nevertheless, despite the disappointing nature of a typical Gucci project such as this one, it is not entirely surprising that he maintains a strong fan base. While not exceedingly well-spoken, Gucci is extremely blunt and to the point. This is perfect for the brand of hip hop he has cemented himself as being a king of. Of equal importance, if not more, rather than having to wait two to three years for a new project from their favorite artist, Gucci fans receive new material constantly. Over the span of his career Gucci has and continues to release countless projects, whether they be albums, EP's like this one or his highly acclaimed mixtapes.