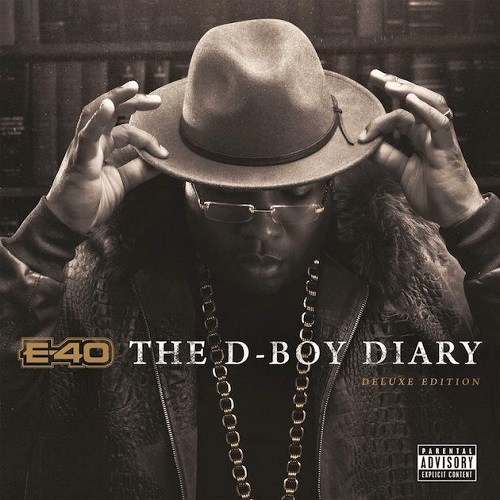 "This business is filled to the brim with unrealistic motherf---ers."

As said by Marsellus to Butch in 'Pulp Fiction.' But not solely applicable to the inscrutable world of prizefighting. The rap game has to be the epitome of such a business. Hundreds of real success stories have fueled hundreds of thousands of false hopes and a continually handed down superiority complex that is inherent to rap only strengthened the resolve. At times it gets a little too much and we don't know whether we should feel pity or contempt for the many delusional minds, but most of the time we accept them as part of the game and the entertainment it provides.

Earl Stevens is the type of guy to give the same speech. Well, not exactly the same, because he's not a rogue character who's got some karmic Tarantino-ordained fate coming. He doesn't have to put it this explicitly. His sheer existence, the extraordinary consistency of his career, exposes the poor souls who put their faith in improbability. Music industry experts may object at this point that the rap entrepreneur's recent conduct bears traces of irrationality as well. In the past 7 years he has put out 14 solo albums, all of them comparatively elaborate in terms of musical and sonic quality, involved personel, artwork and video clips and all of them also released physically. What is clear is that such a business model only works out if the artist himself has built his career from the ground up and was involved when every single brick was laid. In rap music, E-40 is more or less the only one to do it on that level. Wich other artifact from the glory days of rap even remotely runs the chance to strike gold with singles these days?

E-40's success and survival are all his. In a business that is more tell than show, he is living proof of his own realism. His latest project, the two-volume "The D-Boy Diary," closes with the track "Paid Off," on which he ponders: "Physical sales is down, so I'ma get paid from streaming." The prospects of that particular business don't look so bright at the moment, but E-40 still rests on his reputation as a living and breathing success story. A story that he retells song after song, beginning with the black-and-white broadcast soundbite The Mekanix sample for opener "Stack it to the Ceiling": "The story of the brash young entertainer who fought his way up from the slums!" Inspired or not, the conversation invariably comes back to success and struggle, struggle and success. What's interesting is that Earl continually mixes up the past and the present and the first as well as the second and third person. At one point he's talking about himself today, the next moment about himself back then, then about others. That's how you end up with seemingly insatiable statements like the hook to "Money," which switches between "I got money" and "I need money."

E-40 takes being a representative a little bit more seriously than some of his colleagues, regularly keeping those in mind who aren't yet past the struggle or may just never escape it. And if he practices what he preaches, he'll someday "open a homeless shelter, provide some clothes / a blanket, a bed and some pillows." His philosophy and his raps are fundamentally inclusive - beyond the guard that is naturally kept up. It's left up to the listener to decide whether cautionary or inspirational moments are simply part of the act. Yes we've heard it all before, but some things can't be repeated often enough.

Still repetition is certainly a complaint he has to put up with. Even great rappers become easily redundant, especially when they feel compelled to put out product so frequently. If it seems that everything is going business as usual for E-40, that also means that once more quality and quantity run the risk of being at odds with each other. Evidently "The D-Boy Diary" has its share of music that would never qualify as classic material. Skip-worthy moments include "Stay Away," "Puttin' in Work," "Broke Bitches" or the digital-only, Deluxe Edition track "Slappin." And if we're being honest it wouldn't have made the slightest difference if the two 'Books' of "The D-Boy Diary" were the missing two 'Corners' of the prior "Sharp on All 4 Corners" series. Clearly E-40 and Heavy on the Grind Entertainment are suggesting variations where there are none.

Things get instantly more interesting when the music moves away from the robotic grooves, the male hooks (40's collaborations with female singers can virtually be counted on one hand) and the tedious succession of nearly identical rabbits pulled out of the lyrical hat. "This Goin' Up" sees the host and guests Husalah and Turf Talk catch a serious case of the crazies in best Bay rap tradition. Speaking of cameos, B-Legit and E-40 always click together (pun intended), and while their duet "Savage" also doubles as an unnecessary (read: unoriginal) Jazze Pha comeback, "Highway" proceeds steadfast across a rumbling Ted Digtl rhythm without distractions. "Straight to the Point" is a lean slapper that takes G-Eazy and Eazale aboard, the former visibly thrilled to be in the presence of a legend: "This is history here / Take 'em all back, 0-6 is the year / Back when the Bay told 'em all when to go / 'Bout to change the game again, and that's all you should know."

Generally, though, the songs tend to be just as well off (if not better) when he has them all to himself, when he can extend his lyrical and vocal tentacles all over a track, like the turnt up gospel of Willy Will's "Thank U," the abrasive bounce of Rick Rock's "Get Money or Get Lost," or the throwback rhythm & funk of ProHoeZak's "Somebody" (that for once features a noteworthy sung contribution courtesy of Rico Barrino). Witness him adjust his flow to the lightfooted Kent Jones & Illa Da Producer co-production "Gangsta Song," or the whispered prelude to "On One." As always, 40 Water is in his element, all the while not neglecting the 'element of surprise' that once served him as an album title. Because despite inevitably repeating himself, E-40 has a way of presenting his arguments in a manner that sounds fresh to your ears. And that comprehends the songs as a whole. A beautiful example is "Military Time," an odd piece for sure, but also a clear, unvarnished commentary that reports from a man's world but can do without machismo.

Per usual, E-40 balances solid Bay jams with modern backdrops. BRVNDONP plays the xylophone bones for the Gucci Mane feature "All Day." On "The Grit Don't Quit" Ted Digtl tickles euphoric chimes just below the level of eruption around a brontosauric bump. With "I Had it in a Drought" ProHoeZak is responsible for just about the only obvious sample jack, as 40 waxes nostalgic over the slick old school groove. Overall "The D-Boy Diary" is characterized by dark undertones to the party-ready Bay Area vibe and never crosses over into sappy mainstream territory. Even the Kid Ink-assisted "2 Seater," a romantic little ditty, feels right.

"How Do U Like That" and "I Know a Guy" are both anchored by old movie samples, an angle that's exclusive to E-40, and though the former is slightly out-of-order with the rapper sticking to a sing-song and the latter is another drug dealer confessional, they offer a break from the assembly line process that has taken over these albums. 2015's "Choices (Yup)" was an original concept that proved to be a smash. "Check" and "Uh Huh" try to repeat the trick, but don't have the same traction as the prototype. The Lil B feature "Flash on These Bitches" is devoid of anything that would have made a Lil B feature daring. "Bring Back the Sideshow" is a tad bit too pedestrian to resurrect the sideshows of yesteryear. Although we're all wiser in retrospect, the blue/red color scheme comparisons he drops in "Bay on Me" seem trivial considering who eventually won the presidential race. Wouldn't you rather see the self-described rap tycoon clarify his position on Trump? And since we're on the topic of men flaunting their wealth - even across flowery language like "Finances used to be ugly, but now they gorgeous and lovely / When my paper was injured, it made a speedy recovery" - how is that of interest to you and me?

Ultimately E-40's foundation is just too damn solid, the narrative too detailed, the message too balanced, for him to dig his own hole as rappers often do. The realism is just too strong with this one. "Bet they love it cause we say so" (the bottomline to "Say So") is a revealing moment, alleging that the power of suggestion can make us like any sorry effort we are force-fed by the entertainment industry, and if E-40 and collaborator iStevie perhaps do indeed have a point, you could be condemned to like stranger curiosities than an E-40 song in 2016.

Some simpleton posted the following comment on a purchase page for a collection of four "Choices (Yup)" remixes: 'Try writing more than one track'. Perhaps he or she eventually found out that E-40 has not only written but recorded and released more songs than the vast majority of rap artists. It's again a very heavy helping on E-40 songs that we get with "The D-Boy Diary." You can construe any type of argument against such an offering, but not that he hasn't been writing more than one track. In his very own way, E-40 is the very opposite of a one-hit wonder.