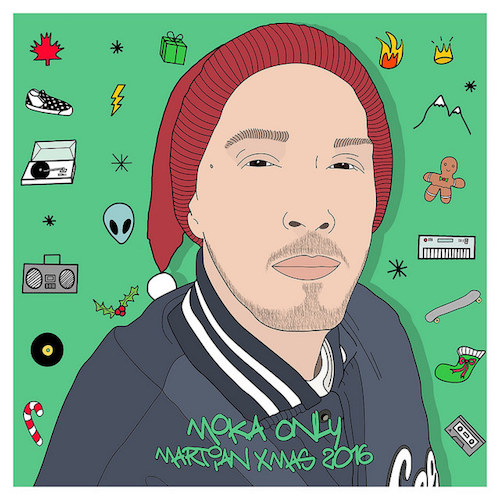 "So Flash, why are you reviewing a Christmas album over two weeks after Christmas? What gives?" You'd rather I wait until THREE MONTHS after Christmas? You'd rather I review it this summer? You know that might not be such a bad idea - I should start reviewing Christmas hip-hop albums in July. Basically though a lot of holidays albums couldn't be addressed in a timely fashion owing to travel commitments to visit family and work commitments covering mixed martial arts. In fact I've got several of the latter coming up this week including one later this afternoon, but I'm literally burning the midnight oil to bring y'all a few extra reviews this week including this one.

"People, look
I don't think I need you, you don't even need me
I'm a Martian, I'm born to be free like TV
It's really gettin cold around the town of the V
I mean it's scarf time and Timberland boots, that's the scene
But back to you gettin on my N-E-R-V
-E-S, never stress I'ma let that be"

Moka Only traditionally releases a free download holiday themed album, though you can also cop this one in a physical edition or support him by paying for a digital download from the links above. Even though he supports the "Martian Xmas" theme with pop culture Christmas samples from the aforementioned TV shows, and the sound of a Charlie Brown holiday special on tracks like "What Up November," you could actually pass this off as any one of his numerous releases throughout a year and not have it fall out of step or be out of place. In other words it's a seasonal release but it's actually not -- ya dig? Only songs like "A Little Coal" hint at what you'd get in your stockin' if you ain't rockin'. This entire release is self-produced save for Chin Injeti's injection on "The Wish," and that's just fine since Moka always has been (and continues to be) best served by being the total package - producing and rapping himself. He's so talented that as he says himself "You can make a song out of damn near anything" and he routinely does. That's the charm of Moka Only really. You get the feeling he's just spending all day going through his crates, suddenly comes across a loop he really likes, and the next thing you know he's making a Pharcyde inspired track like "Bread Butta." Come to think of it the more I listen to "Martian XMAS 2016" I would have been perfectly alright with reviewing this one three to four months from now -- not because he deserves to be put off that long but because this album isn't specific enough to the holiday that you need to review it in December. Perhaps there are songs to bring you in from the cold this time of year like "Somethin' For Warmth," and it probably gets colder in Vancouver than it does in the O (then again they might be comparable I don't know), but the jazz bass stylings of tracks like "How Simple Can It Get" aren't specific to anything but the swing. Grab some eggnog if you can still find it or if not crack an unboiled one in your shot of rum and get down with the sounds of the Martian. Music Vibes: 8 of 10 Lyric Vibes: 7.5 of 10 TOTAL Vibes: 7.5 of 10