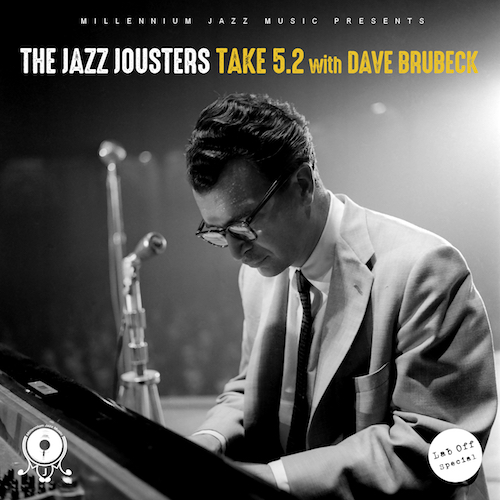 I'm going to state in advance that the format of this review can't and quite frankly won't let itself to giving Dave Brubeck his proper due. If we were to talk about the scope of his musical creations and innovations from the 1940's up until his death in 2012 we would frankly not have any time left to discuss this album paying homage to his work. Let it suffice to say that in jazz music he was a literal one in a million talent, a piano player beyond measure, and that the list of awards he received is exceeded only by the discography of works he recorded. If the term "cool jazz" has any relevance to you, Dave Brubeck embodies it, and there's little question you've heard a Brubeck sample on one of your favorite rap songs without even knowing it.

You'd expect a group named "The Jazz Jousters" to be fans of his work, but that doesn't really begin to tell you who they are. Even after doing my due diligence for this review though there's still an air of mystery about them and that may be quite purposeful on their part. What I can ascertain as fact is this: they are an international collective of producers who challenge each other to come up with the most innovative ways of sampling, interpolating, chopping up and reinventing jazz tracks. You can think of them as an extension of the late Keith Elam's philosophy about combining two arts that were uniquely culturally black in jazz and hip-hop and creating something beautiful through the intersection of arts already bonded in blood. Other than that I can only tell you that their founder's name is Gadget, and that dating back to June 2012 they've recorded FORTY-SEVEN(!) albums. These Jousters never get off their horse.

The name "Take 5.2" is a tribute to The Dave Brubeck Quartet's signature song "Take Five" and the album itself was released on the fourth anniversary of his passing. The aforementioned Gadget produces one of my favorite tracks on this album in "Round Tha Clock," where he takes the funky fresh piano stylings of Brubeck and melds them with hip-hop samples on the hook, and the way it all meshes together results in a piece that's both head nodding and mellow at the same time.

Other members of the mysterious Jousters collective provide equally worthy tracks flexing their own Brubeck samples. B Ramsey kicks things into high gear with a track that undoubtedly is less about Brubeck and more about his Quartet as it gets horny with the horns - but "Mountain Moonshine" might just make you want to take a swig or two. Stay Classy goes the opposite direction on "2DB" and manages to work a Beastie Boys sample in that vows "you don't stop." I really don't want this song to - two minutes and change isn't enough. Maple Syrup lives up to their name and lays it on thick for tracks like the slow paced and slightly distorted (in a good way) "Lifetime" and the crackling record needle running over Brubeck's grooves on "Love St." It reminds me of when Ice-T once said he wanted fried chicken samples - this is some crunchy delicious s--t. It's pretty clear to me after multiple times playing the 41 minutes of "Take 5.2" that these Jousters ain't no jesters. You can't evaluate songs like RickMal's spaced out "Special Brew" and Bare Beats tranquil "Younger Days" without giving full acknowledgement to the debt they owe Dave Brubeck and his Quartet. These tracks wouldn't be possible without that extensive archive of jazz compositions, but at the same time they've taken that catalogue and pun intended given it their own spin. I know Guru would approve.