:: Bucktown USA/Duck Down Records
as reviewed by Steve 'Flash' Juon 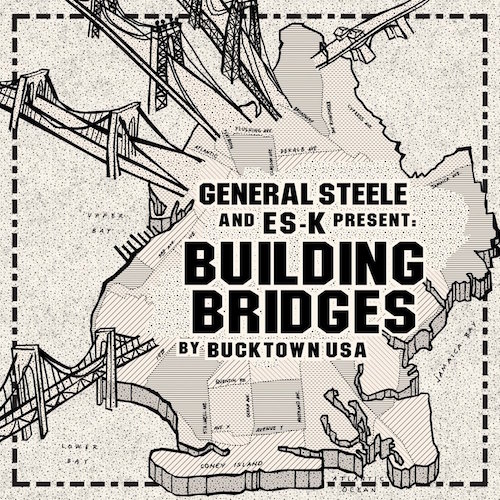 "Welcome to Bucktown USA." The famous words of Black Moon's own Buckshot Shorty, words which would be adopted by his fellow Boot Camp Clik comrade General Steele when he launched his own label imprint in 2004. Steele may be better known to some as one half of the legendary rap group Smif-N-Wessun. That's not to say Steele hasn't been hustling on his own though, having dropped the compilation album "Welcome to Bucktown" in 2009 and staying busy collaborating with everyone from his partner in rhyme Tek to hip-hop maestro Pete Rock. Much like that initial "Welcome to Bucktown" salvo, this "Building Bridges" album has the feel of a compilation, "produced mostly by Es-K" as evidenced by the album's cover and the press release accompanying this album.

There's good news and bad news here depending on how affectionate you are for the classic Boot Camp Clik sound of the 1990's. The bad news if you're expecting some classic Beatminerz type backdrops from Mr. Walt and Evil Dee then obviously that's not what you're going to get with Es-K, whom the aforementioned press release says is "best known for his 2014 album Serenity." Yes - so well known that I had never heard of it nor him before I got a copy of this for review. Okay now if I can stop busting Es-K's balls for a minute (sorry bruh) he's not bad. In fact I damn near caught deja vu while listening to "Just Live," because he's on that Quincy Jones "Summer in the City" s#%t and even has Buckshot dropping bars on the track. If you remember the B-side to Black Moon's "I Got Cha Opin" twelve inch you'll understand why this song made the hairs on my neck stand and salute.

That's not the only moment that's going to make you feel like a ghost just tickled your soul with its icy cold hand. Yet another posthumous performance by the late great Sean Price has been unearthed on "Building Bridges" which can be heard on "Unforgettable," also featuring VVS Verbal. Even though VVS is clearly friends with Es-K, Steele or both given how many appearances he makes on "Building Bridges" (10 of 12 tracks), you might as well not even bother when SEAN PEE makes his appearance. This is late era Sean, where some things in hindsight were clearly off and should have been cause for concern, but he still steals the show.

"Shot to your temple, uhh, poppin your pimple
Indeed the G-Shock to watch you Presidential
B--ches got balloons in they wombs
S#$ttin bricks in they Fruit of the Looms
Thuggin in essence, drug of the preference
Mother father sister brother love is the message
Uhh, primate in his prime
Dig and violate in the 8, ain't changin your mind"

If this album was intended to be a platform for VVS Verbal to elevate it backfires in my eyes. It's not that he's a bad emcee, but the memorable performances come from people you would know because of General Steele, like the late Price's partner Rockness Monsta on "Kill Everything," or fellow Bucktown rapper Shabaam Sahdeeq on "Do Remember." Perhaps the closest I feel Verbal comes to establishing himself is on his "Redlight" duet with Steele, and while the General still gets the most shine, I can see what Verbal is about on this one and respect his work.

"Always up for the task cause I challenge myself
Don't go against the family - bad for your health
He all in, gotta play the hand he was dealt
There's food, clothing, shelter, happiness wealth
Time to travel the world, make my way 'round tour
Always opening doors, break down walls
Levels and rules in the games, we lay down laws
Time to get is now..."

Bringing it back full circle to the "good news/bad news" thing, I have to say that if Es-K was producing a VVS Verbal album, I'd listen to it. Es-K is a solid producer who qualifies as "better than better than average" and VVS is an inoffensive emcee. Unfortunately this isn't billed or sold as a Es-K & VVS album, it's sold as a General Steele & Es-K album, and that changes your expectations right from the jump. There's just enough of Steele's influence and a lingering Duck Down/Boot Camp presence to please those of us still clinging to our Fab 5 and Originoo Gunn Clappaz twelve inch singles, but who wanted more should maybe call up the General and save their time until he decides to take more of the spotlight for himself.