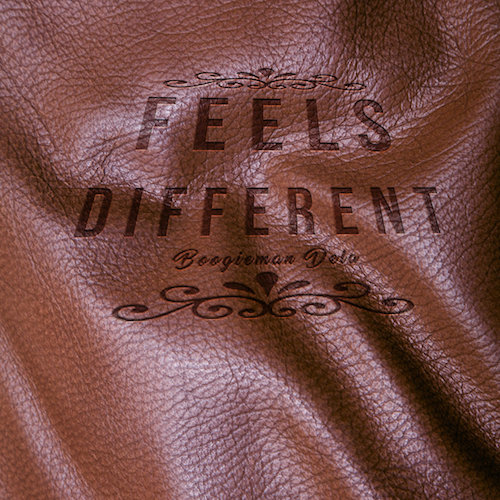 Boogieman Dela's new EP "Feels Different" is meant to be a departure from the emcee's previous work. He definitely goes in a different direction with his vocals compared to his previously released singles. The loop-based hip hop instrumentals remain, but Dela relies more on his singing chops over his rapping background here.

The first song "See Ya Face" sounds like an outtake from D'Angelo's "Voodoo." Anyone familiar with that album knows that is high praise indeed. Dela may not have the vocal range of D'Angelo, but his voice just works with the song. Although, Deet the Beat Machine's instrumental on "See Ya Face" is equally responsible for the song's success. A lazy kick and snare drum combination are all that's needed to set the rhythm. During the verses, the only other accompaniment is a short unhurried keyboard loop that matches the laid back drums. However, the best part of the track is when a trumpet joins the aforementioned instruments during the chorus. I'm not sure if Deet sampled an old jazz recording, but it sounds old in the best way; the trumpet literally sounds like a blast from the past.

The title track comes second and actually feels different from the first. However, it is also produced by Deet the Beat Machine. The kicks and snares are much more urgent. The melody is also more forceful. While the first track is relatively downbeat, this second song is rather bombastic. It also cements the major theme of this EP which begins on "See Ya Face." That first song is primarily about Dela musing about a woman he wants to date, while he also dismisses the claims of other suitors. This continues in "Feels Different" as Dela assumes superiority over those suitors: "Everything feel different / I make things feel different when you do it with me." The different feel doesn't just refer to the musical stylings at work in this EP, but also to how Dela approaches relationships. While the dedication to singing is refreshingly different, the topics only seem to scratch the surface of Dela's relationships. To be fair, though, it's hard to flesh out any concept over a five song EP.

The third track, "Shorty Bae," is once again produced by Deet the Beat Machine. This instrumental resembles "Feels Different" more than "See Ya Face." Even though Ghetto MC is only a featured artist here, it almost sounds like his song as Dela relegates himself to the hook. This is the first song on the EP to really have any rapping and Ghetto MC has two verses to lay out his ideal relationship. He actually fares better than many rappers when it comes to staying on topic for that long. However, towards the end of the first verse it becomes difficult to tell if Ghetto MC is still talking about his girl or himself:

"Had to step back for a minute
And analyze how nobody did it how we did it
Funny thing, we ain't even finished
Middle finger to the critics
It's game time, we killed them in the scrimmage
Now we gon' work the game plan for the future we envisioned
It's vivid, I see it clearly
Castles, chariots, and children that are carefree"

While the prefix 'we' would indicate that he is still referring to him and his partner, it's unclear whether this is a romantic partner or not. I get the feeling that Ghetto MC is referring more to his career here. Why else would he be putting his critics on blast? There is a possibility that it refers to critics of his relationship, but there are a myriad of better ways to say that. The vague sports references only add to the feeling that this part of the verse is about his movement more than his lady. Nevertheless, the flow is entertaining and Ghetto MC is right back on topic for the second verse. None of this would be an issue except for the fact that Boogieman Dela is pushed to the periphery for what amounts to a large section of this EP.

The fourth song, "Make Her Say," helps to rectify this imbalance by keeping Dela as the sole vocalist. Dela sings the hook again, but decides to rap the verses this time; maybe he got the itch to rap again after sitting out the previous track. Comparatively, Ghetto MC has a more nimble flow, but Dela is able to dig deeper into his relationship than the former. What appears to simply be a snapshot of his sex life turns out to be a much more nuanced take on the bond he shares with his lady.

"When I put it on her
So good I make it rain in southern California
It's the one and only
Mandela - and she my little Tenderoni
Around my homies I'm hard as nails
Around her I get cheesier than macaroni
And I smack a homie
If he disrespect her - she already know me..."

After a mixture of rapping and singing throughout the EP, the last song, "Too Late," finds Dela in a middle ground between the two; Dela manages to incorporate singing into his rap flow. While the first two songs deal with a burgeoning relationship, the last three songs are about learning to live in one. If the third and fourth tracks are about the good times, then this fifth track is about the rough patches. This Don Cannon produced instrumental stands out from the other songs as well; it is easily the busiest of the five beats. This is not detrimental to the record, but it is a far cry from where the EP began. As far as the topic, this is halfway to being a break-up song. The first verse seems to be more about Dela's career and the second verse covers relationship troubles. This might seem odd because the majority of Dela's contributions to the EP remain focused on the latter. However, it still fits the song because Dela's chorus is about not appreciating things until they're gone.

After five tracks, Boogieman Dela's "Feels Different" has me thinking he hasn't exhausted this style yet. Maybe this foray into singing is just a momentary phase and maybe these ideas can't be extended into an LP. I think it would work, though, and I think it would be well worth it for Dela to explore this further. As it stands, this EP is like tasting a wine when there's no option to buy the whole bottle. In addition, it has a very particular aftertaste that leaves you unsure how enjoyable a larger swill would be. You can keep on tasting the same small sample but it will never be enough to determine the quality of the full product. This might be true of the EP format as a whole, but doubly true of this one. I think Dela can deliver that full product based on the strength of "See Ya Face" alone. If he doesn't decide to fully go in that neo soul direction then "Too Late" is a fair approximation of how he could further incorporate this style into more traditional rapping. Personally, I'd be eager to hear more of the former from Boogieman Dela.