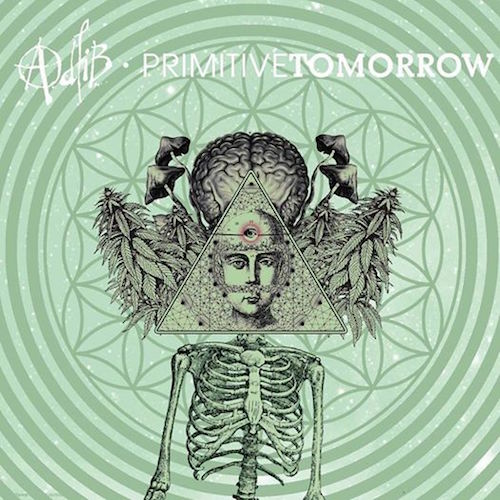 There's something I forgot to mention the last time I reviewed Adlib's album "The Highway" - there's more than one Adlib out there. One is Minneapolis born and Los Angeles bred, a member of Global Phlowtations, and has also released albums under his birth name of Thavius Beck. He's not to be confused with the Adlib we're reviewing here, who hails from Allentown, Pennsylvania and rolls with artists like Slaine and Madchild. It's probably not a surprise he wound up distributed by Battle Axe Records at some point. It's a natural progression for an emcee with those friends and credentials.

One area the two Adlibs might relate on though is ganja, given that recreational marijuana is legal in California (if you're over 21). Adlib has certainly gone out of his way to state his advocacy on "Rebel Hippies (Light It Up)," even sampling from Bob Marley's famous speech: "Herb is a plant. I mean, herb's so good for everyt'ing." Marley also implied that government/authority doesn't want you to smoke herb because "it makes you rebel," hence the name of the song. Here's a little of what Adlib himself has to say on the subject:

"This for Willie... Marley, Jimi, Cheech & Chong
This for Cypress... Red and Meth and Snoop Dogg
... everyone behind bars for bulls--t laws
I'm tryin to tour like the Dead, bob with all of y'all
You ain't got a light my friend? What's mine is yours"

That really shouldn't come as a surprise if you're familiar with him though since his last album had a song called "Rolling Stoned" and he's already been on a "Rebel Hippies Tour" at various venues even before this album's release. What might be surprising though is how much he and Ren Thomas look like urban truckers on the "Work" video, repping in their Philadelphia Eagles gear while rapping at what looks like an abandoned factory in front of a semi cab.

I'm not mad at it though. The whole look and feel of the video is as grimy as the song and given his friendship with Jedi Mind Tricks this wouldn't be an out of place look for Vinnie Paz musically or visually, although if there's a cameo he'd have to be on a remix because he's not a guest on "Primitive Tomorrow." The cameos include the aforementioned Ren Thomas, Demrick on "Sign Language," Jessica Lamb on "P.E.A.C.E." and the appropriately named Tabs on "Tim Leary." It's pretty clear Adlib is opened minded when it comes to his recreational pharmaceuticals and has a generally libertarian and pro hip-hop philosophy as evidenced by "Sensi Starr."

"I'm a tie-dye and converse, I converse with the universe
You on Earth? I'm on Martian turf
When it pop off, we marchin first...
This a new breed, I'm a new birth
F--k your net worth, this for Kool Herc
Respect first, keep it O.G."

Adlib's strengths are in some respects also his weaknesses. He's a generally competent emcee who doesn't offend with the way he flows or what he raps about, but he's also not a rapper who just overwhelms you with his amazing dexterity and profound thoughts. There are no killer bars that either make you laugh or send you into deep though. If you're being generous you can say he sounds like a lesser member of The L.O.X. on tracks like "P.E.A.C.E." but I think Jadakiss or Styles P would easily overshadow him on a track. It's hard when it comes to a rapper like Adlib to be negative because there's nothing bad about him, but nothing that makes one go out of their way to recommend him either. He's just that rapper that goes on tour with the better known rappers who everybody that shows up early will politely listen to without booing, bop their head for a song or two, and maybe pick up his CD for $5 or $10 at the merch stand later. Will you spin it that many times though? His beats are "aight" and his raps are "aight" so you'll rock it for a little while... but not too long.