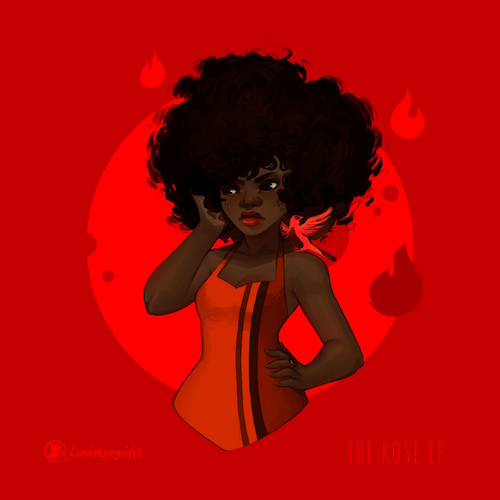 More shocking to me than the short length of this EP (13 minutes) is the long time since we reviewed a CunninLynguists album. I don't know who was slacking on that one but I'll take the rap for the team that we didn't cover "Strange Journey Volume Two" or "Volume Three." It's certainly not through lack of appreciation for what Deacon, Natti and Kno bring to the table, and in fact we've reviewed a couple of Deacon's instrumental releases in the interim and sung their praises. Now it's time to bring it back full circle and combine those beats together with the rhymes -- and they are powerful rhymes. Let's start with "Riot!"

Natti: "Yes - stress and pressure bust pipes
Know it ain't fun when the rabbits behind the sights
Seeing fires burning as bright as the city lights
Fueled by revolt its highest voltage ignite
generations behind with numbers in decline
Are now the ones peeking out the blinds
In these times saying why..."

Deacon: "Did we get that notion, from across the ocean
Such self destruction, pain and the misery
We know nothing of infamy let's role play the history
book - reverse psychology the apology
that civil war wasn't fought for me
it was economy - look
Abe freed slaves, date recorded
but it took a hundred years to piss in the same toilet"

They definitely aren't mincing words, but that's something the aptly named cunning linguists have never been known for. As Andre Benjamin once rapped their oral demonstration is like clitoral stimulation, and while Kno plays the background with a beautiful instrumental for "Red, White & Blues" featuring Jason Coffey, he's just as present as if he was dropping bars. It takes a beautiful melody like this to contrast with the deadly serious words that Deacon spits.

"And on this long road to perdition
You might wanna use my navigation system, my wisdom
shine light through this black prism, my rhythm
let it guide you through baptism - word to Shirley Chisolm
I'm truly tryna blaze trails
Write back senders of the hate mail that keeps comin
caged bird still singing, chain gang still drummin
100 miles and we still runnin
400 years - gimme a pound of Bob Marley
American flags strapped to the back of black Harleys
And if we burn you down it's to begin anew
Let's pull the sheet off of our history and bid adieu"

The poetry (and it should truly be called such) is an incredible counterpoint to those pundits who always say "If you hate America so much then why don't you leave?" That's not the answer and never has been. You can still love being a citizen of America without having to pretend everything is "great" or that it ever was "great" at some mythical point in the past worth scrabbling to get back to. Being American will definitely leave you red, white, black and blue over the years - and anybody who wants to sing those blues should be listened to and given deference given this country's ugly history. Deacon isn't pulling punches with his bars on this EP. Just read what historians have to say about the Civil War and the REAL reasons behind the country's schism and the Emancipation Proclamation. That doesn't you can't still love freedom though as Coffey sang on the opener: "my love's true/even after everything you put my blood through."

This short and poignant EP ends with "Red Bird," where Kno once again brings the subtle and harmonious melody, and Natti matches it with an equally soft spoken verse to open that sucks you in and makes you hang on every single bar that he drops.

Even though Deacon's closing line that "sometimes not even a bird's eye can see the devil's details" could be a somber or depressing note to go out on, the guitar licks at the end still manage to uplift and bring things to a less dark conclusion. There's joy in pain though and beauty in the darkness and the CunningLynguists strike that balance with a well considered EP that like The Roots once said will leave you wanting MORE?!!!??!