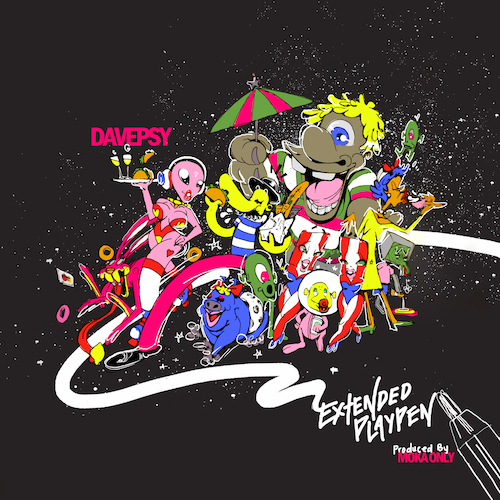 The album's name may get you twisted up for a minute, but davespy's "Extended Playpen" is by no means an EP. It's a full length LP, but at 33+ minutes, it's not an exceptionally lengthy one. That's alright though because this long player has something a lot of albums in the same space do not -- production from Canadian hip-hop superstar Moka Only. Given the relatively short travel time from Langford, British Columbia to davespy's hometown of Seattle (five hours by surface and less by air) it's not terribly surprising that they would cross paths locally, although Moka doesn't bless too many people he meets since he seemingly needs every beat he makes for the dozen of projects a year that he drops. Obviously davespy did something to impress him.

Three things strike me about this union right away. You can hear the first thing on the "UCLUELET" above, particularly at the 1:11 mark -- he's got a very Lyrics Born thing going on with his flow and delivery. That's a huge positive in my book since I consider Born to be one of the most consistently slept on Cali rappers in the game today. The second thing I notice in this track is that davespy has an incredibly self-deprecating sense of humor, which he uses to counterpoint the typically cocky nature of an emcee on the mic. It breaks the ice for dave and lets you get familiar with him in a way that makes you want to put your hand on his shoulder and say "It ain't that bad bro." Peep:

"Yo -- I'm just a little bit ugly
Yet some women still ogle me (ahh)
So as long as I'm single
I'm going to entertain that -- I tend to tame cats (rowr!)
There's no double meaning there at all
Not a He-Man, got a pe--s and my balls, and my word
Like most males, probably trust, I'm a nerd
But in shape? Obviously a rhombus"

The third thing that sticks with me is that Moka has very purposefully given davespy a J Dilla slash Native Tongues musical sound. It creates a very comfortable and chill headnodding atmosphere as you get down with the sounds of the D-A-V-E. He even seems to reference Tribe on "Keep Bup" with the words "You can +Get Down+ or you can get up" in the song's denouement, and this track would certainly be comfortable sandwiched into a "Midnight Marauders" playlist.

In the process of researching this album I came across the fact that davespy used to be part of The Oddities crew, although by his own description he had been "minimally active" since they disbanded in the 2000's. The passing of his father in 2015 caused his perspective to shift, and he got in touch with Moka and said "Give me the Pete Rock treatment." Even though they had previosuly collaborated in studio (again they are regionally proximate to each other) this one was done all back and forth over digital transmissions. Based on the quality of the finished product you'd never suspect they weren't sitting in the same dank cavern of beats together, kicking ideas back and forth while a blunt sat smoking in an ashtray. Moka even drops a few bars of his own on "See It Now." There are a few other cameos as well, including Ahmad and Blu on "ANFOYU" and 10isee Williams on "Hell, Love a World" but for the most part it's dave spying on you and tapping into your desire to chill out to some mellow hip-hop music. This is very much an album where the "Vibes & Stuff" matter, from the opener "Home" to the closer "I'm There," although some editions come with the bonus track "Holio." The album is so cool and refreshing that you could almost miss that davespy is saying some pretty dope and/or humorous things, but the nice thing about an album like "Extended Playpen" is that it's good enough to invite repeated playback. You won't miss how dope he is for long.