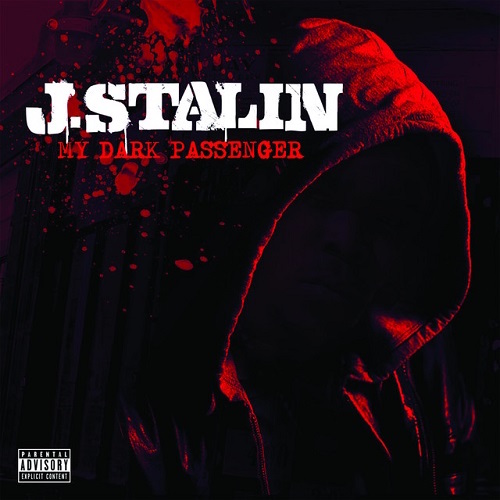 "You ain't never been in a car when niggas went to murder
I ain't never changed, nigga - that's on purpose"

As chatty as he can come across, J. Stalin can also be brutally precise. Not many rappers can effectively articulate themselves through raw emotions and bare facts at the same time - at least not anymore. The late Prodigy was not only one of the champions of poetic rap realism but also one of the last ones standing. Active since 2005, the West Oakland representative tries to fill these shoes in his own effusive way. Typically, his candid confessions come with sugary to bittersweet beats, a trademark that only furthers his singularity. If rap insiders or industry executives were to listen to J. Stalin acapellas to figure out what producers he should work with, they'd very likely go for something darker and heavier than the music he is ever so often drawn to. With "My Dark Passenger" the opportunity has come to experience him in a more noir setting. That's not to say that the J. Stalin catalog didn't generate some truly chilling moments so far, often precisely because of the juxtaposition of smooth grooves and harsh raps.

But relative unknown LT Beats turns the thermostat down on the melodies, strips the rhythm section of excess baggage, and just generally pursues the more somber strain of Bay Area street hop. Framed by a quote from modern-day Jeckyll and Hyde Dexter Morgan trying to define the dark force that drives him, "My Dark Passenger" also maintains its focus by abstaining from a staple of Stalin's catalog - songs speaking to the fair sex. Instead he circles the familiar either-or options (friend/foe, loyalty/betrayal, starving/balling, do/die...) with matter-of-fact lines that are not oblivious to the delicate balance between dialectic things:

"Got a rope around a Uzi like a purse, nigga
When it's time to do the bounce-out, I be first, nigga
The dope game had me feelin' like I'm cursed, nigga
Dehydrated like I'm finna die of thirst, nigga
I be sippin' syrup; and I ain't even go to church, nigga
but through all the bullshit I still put God first, nigga
I hope you learn your lesson and don't wind up in a hearse, nigga
I been in this game since birth, nigga
Cypress Village-bred, I'm the realest on earth, nigga
What type of nigga can't go back to his turf, nigga?
You'se a jerk, around here that don't work, nigga
Around here that don't work, nigga"

Even though he dubbed the precursor to his latest "I Dont Sell Dope No Moe," on "My Dark Passenger" Stalin is committed to the clearheaded thinking of the drug commerce and turf politics. Still the musical focus and the distinct title don't prove enough inspiration for J to the S to probe beyond his basic survival instincts. The rapper has delivered lyrically richer performances in the past, and among too many typical lines a random absurdity like "I need a down bitch like Hillary Rodham / Put her ass to work like a slave pickin' cotton" stands out all the more. And so the entire project seems equally incidental, from the not really enlightening title track ("I'm just tryina chill - but you just want me to kill" is about the only substantial reference to a could-be concept) to closer "People Change," which sounds like it belongs on another album.

J. Stalin has a firm grip on what he does. Which he has proven as one of the most prolific Bay artists of the past ten years. The problem is that because being Stalin comes so easy to him and he always comfortably reaches a certain plateau, that he is reluctant to take really radical steps. The cunningly rough update of previous single "What's My Name," "What's My Name Part 2," is probably the extent of Stalin's ability to flip the script. What remains is an album that thanks to LT Beats' expertise connects J. Stalin sonically to his music's Bay Area roots.