:: Below System Records
as reviewed by Steve 'Flash' Juon 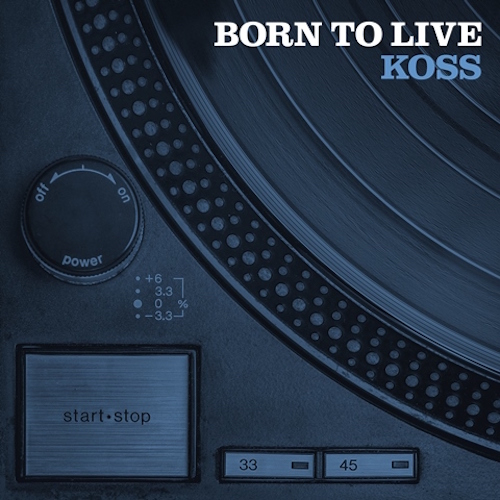 The quickest way to explain "Born to Live" is that this is a compilation. Let's get a little more in depth than that though. Belgium producer Deejay Koss has been an underground factor for more than a little bit now, crafting gems for rappers like A.G., El Da Sensei, and Craig G just to name a few. As he built up his rep and his network of connections, he reached the point where he could put out an album like "Born to Live" under his own name, picking and choosing all of the greats he wanted to provide instrumentals for knowing they would answer the phone when he called. Even though other deejays like Khaled can pull names just as big for their albums, Khaled also has to call producers in too, while Koss can do it all by his lonely. To give you a taste of what he's all about let's start with the aptly titled "Longevity" featuring Masta Ace.

If you said that Koss was a bit East coast or New York centric you wouldn't be lying. His guest list reads like a who's who of hip-hop head favorites and none of them disappoint. Blaq Poet spits his grimy phlegm all over "The Rawness" while boasting "Hit you so hard even Ripley's wouldn't believe it!" The only way this horny horn song could have been more fun is with a Bumpy Knux cameo. The always eloquent J-Live serves up a warning over the intro of the beautiful "Straight Up Pretenders" when he says "Don't think just cause I be spitting wisdom I won't put it on yo' ass knahmsayin?" Then he does exactly that for the next three minutes. Torae blasts with both barrels on "Don't Stop" while Craig G and Large Professor form the supergroup you never knew you always wanted on "H.E.R." Calling this album a pleasure feels like an understatement, but I can also be observant enough to know I am predisposed to like it based on a lifetime of familiarity with artists like Extra P, Masta Ace, Craig G and J-Live. These are all dyed in the wool veterans of the trade, and when the closest to new you get is Ruste Juxx and Torae, you're definitely playing to a very specific audience. That specific audience is absolutely going to love "Born to Live," but it's fair to say they'd love it even more with a little more depth. I don't mean depth as in "working with artists outside the New York area," I mean LITERAL depth, as nearly a third of this album's 40 minutes is taken up with remixes of songs you heard in the other two-thirds. I can't give "Born to Live" my highest marks as a result, but I can say that Koss and his network of friends delivered an album that's very easy on my ears. People who always say they "want that old boom bap hip-hop back" are advised to cop it.