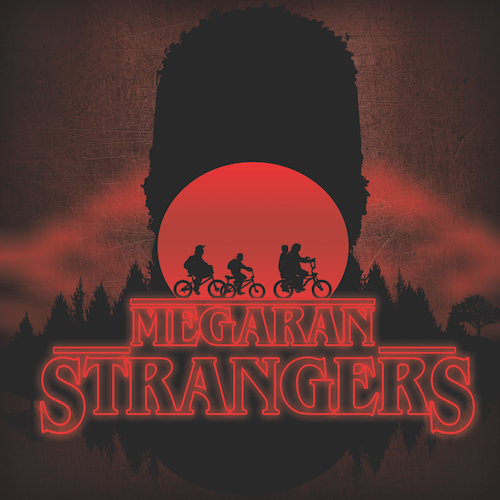 EDITOR'S NOTE: If you haveNOT watched the entire first season of "Stranger Things" on Netflix, there WILL be spoilers in this review. Consider yourself warned.

A few days ago - Octoner 27, 2017 to be price - the nine episode long second season of "Stranger Things" dropped on Netflix. The cult hit series has drawn comparisons to everything from 1980's TV shows to horror novels by Stephen King, but the truth is that it's a little bit of all of the above yet so much more. The first season starts with the seeming abduction of a young boy named Will Byers from the fictional town of Hawkins, Indiana. His three best friends go looking for him - Mike Wheeler, Lucas Sinclair and Dustin Henderson. What they find in the process is far STRANGER than they could have possibly imagined in the many role playing games they shared together. They meet a young girl named Eleven with psychokinetic abilities (manipulating physical objects with the power of your mind) and discover an alternate world christened the "Upside Down," a portal to which has been ripped open by the Hawkins National Laboratory during one of their experiments, through which came the monster that took Will.

Mega Ran's new album "STRANGERS" is both a tribute to the first season and a preview of the second season of the show. It will take you far less time to listen to the entire EP than it will to watch a single episode of either season - in fact the running time of this release is 15 minutes total. That doesn't mean that you should consider it a throwaway project or a snack sized bite of no substance. This is a lovingly crafted project which samples from the source material and pays tribute to it at the same time. As Random notes in the intro to the title track of "STRANGERS," the town of Hawkins is reeling from the events of the first season. "It is now one year later. Hawkins is safe, and back to normal, or so it seems." That's when the rap kicks in.

"What in the world is the Upside Down? I don't know but I must find out
And it's not about Will this time but a means to survive and I love my town
Hawkins, Indiana -- anytown, USA
And nothing's been the same since this one fateful day
'bout a year ago, the story you probably know
The Hawkins Lab had some strange plans down below
And Chief Hopper, leaving something that's out of locker
Could he know where Eleven is and maybe how to stop her?"

The relationships between the characters are complex, and to focus on those characters in greater details, Random devotes an entire song to each of most of the principal cast. That means there are "MIKE," "DUSTIN" and "LUCAS" songs, although humorously enough the "WILL" song is only 34 seconds long. "My name's Will and I got caught! ... Yeah, that's it. No that's pretty much it." What else can you say about a kid who gets abducted in the very first episode? Not much. I have the feeling that fans of the show will mark out for "ELEVEN" the most. Actress Millie Bobby Brown has become a sensation for her role as the unfortunate youth who was experimented on to develop (or perhaps harness) her psychokinetic abilities. Random changes up the style of the album and presents this track in a more AutoTune-esque flow, but perhaps acknowledging that it's unexpected from him he cracks a joke at the end that you should "tell DJ Khaled I got another one." Personally though I dig "HOPPER" because he might be the show's most complicated character. He's Hawkins' sheriff and a struggling alcoholic, unable to cope with the loss of his young daughter to cancer, which caused him to divorce his wife and drown his sorrows at the bottom of a bottle. The beat by Isidor thumps and allows Ran to open up a character who acts tough only to disguise just how fragile he is. Fans of "Stranger Things" should absolutely delight in this tribute to the show. It is the perfect companion piece to the second season on Netflix, and while by no means an official soundtrack, they would do well to comission one so we could get more in-depth bios. How about a tribute to Barb? Or a profile of Will's older brother Jonathan, who plays a major role throughout the first season? Or the shady and nefarious Martin Brenner as so excellent portrayed by Matthew Modine? Let's see another "STRANGERS" EP before Netflix debuts season three.