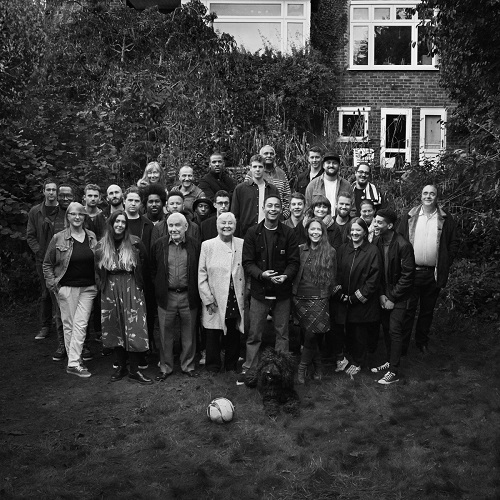 There is, if you care about these things, always a somewhat stimulating unpredictability to how an emerging UK rap artist is going to sound. Is it the jagged sounds of grime or do we get some traditional variant of hip-hop as imported from America? Something in between? Something entirely different? And I already have to backtrack on my initial compliment because in my opinion British rappers (of all walks) haven't been as eager to change the record as their colleagues in, let's say, mainland Europe. At large they haven't been able to mentally free themselves from the attitude and topics dictated by the big brothers in America. Which is kind of sad, but certainly not the fault of the youngest generation.

Loyle Carner, a 23-year-old artist from Croydon, searches for his own way across tradition and innovation. On "Yesterday's Gone," his debut album, he tells his and his family's story to hip-hop that draws from jazz, folk and rock. Although opener "The Isle of Arran," produced by The Purist, makes for an epic entrance with a gospel choir chanting, "The Lord will make a way," the album radiates a homemade charm. If you imagine Carner rappping with a chronically sniffly delivery, you may see the danger of a record that is simply too self-absorbed and ultimately too small-scale. It would miss the mark, however, to simply label "Yesterday's Gone" bedroom rap, rather it's also living room rap, school yard rap, next-door neighbor rap, best buddy rap - and mama's boy rap.

The story of Ben Coyle-Larner isn't conclusively narrated in "Yesterday's Gone," not only because crucial parts have already been told in previous Loyle Carner tracks, but because the rapper possesses poetic ambition. He doesn't spell everything out to the last letter. We may be dealing with a classic case of an artist whose songs have to feel right for him before they have to make sense to me and you. Still bowing heavily to the rule of the rhyme and using old-style adlibs that help him find his flow, he should be more accessible to hip-hop heads than Kate Tempest, with whom he has collaborated. Meanwhile Loyle Carner maintains the mystique of the artist, inviting the listener to an intimate tete-a-tete over a full course menu that echoes, across some 15 years, certain albums by Common and The Roots.

What could go wrong, goes right in Loyle Carner's case. "Yesterday's Gone" is both accessible and artistic. The acapella "+44" deals philosophically with the dilemmas new media presents us with, using the example of an ill-considered text message. In a similar vein, but less directly linked to a particular phenomenon, "Mean it in the Morning" cautions to "only say it if you'll mean it in the morning." If that mantra is also relevant to romantic relationships, "Yesterday's Gone" isn't yet ready to commit, although "Damselfly" and "The Seamstress (Tooting Masala)" give the matter some thought, the latter clouded by drinking confessions.

On this family portrait, his mother is the most present figure, and Loyle Carner isn't the least bit reluctant to admit it. The absence of his biological father and the death of his beloved stepdad, already covered before, do come up, but "Yesterday's Gone" is about overcoming such losses, by yourself and as a group. In the beginning, "The Isle of Arran" finds him at rock bottom, bereft of all beliefs, but ultimately finding stability in family. He is in fact such a family man that he imagines a little sister in "Florence," describing their relationship with tenderness and humor:

"Sayin' that she's finished but I tell her eat her spinach
And she'll see the sky's the limit, trust
Cause when we're with it I can feel there ain't no limit, just
be free, me and my sister, I can see the skies are limitless
I feel her brush her hand across my cheek till I speak
I yawn and say good morning, keep her sweet, squeeze her deep
till she giggles, starts to wriggle in the sheet
Then she disappears and sweeps me off my feet
I need to eat, I'm reminded of the handshakes
Remember that I promised her some pancakes
So I stagger to the stove and start to stand braze
See, I'ma make 'em like my nan makes"

The loving monologue about a fictional sister mirrors his mother's spoken word poem beaming with pride that serves as a bridge between closer "Sun of Jean" and the following home recording by his stepfather that gave "Yesterday's Gone" its name. Seeing how the album cover is more than a family photo, featuring old pals, a former teacher, and people involved in the creation of the record, it comes as no surprise that he also finds time to worry about a friend who's going through tough times in "Mrs C." Loyle Carner is the guy who cares, someone who feels the need to have a word even with those who don't want to listen, as evidenced by "Stars & Shards," admittedly one track that feels just a little bit out of place with its third-person perspective and n bomb dropped at the very beginning.

Loyle Carner comes in fact across so much as an exemplary MC and human being that he's automatically held to higher standards in every respect. While simultaneously being forgiven and allowed time to grow whenever songs are not all that exceptional. Because for every "No Worries" (an old-fashioned indie rap format featuring UK VIP Jehst) there's a "Ain't Nothing Changed."