iNTeLL :: That Was Then This Is Now 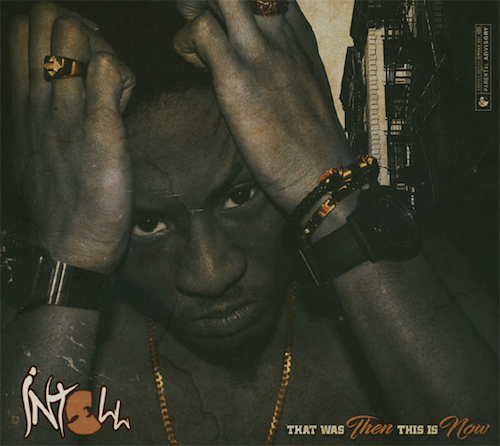 Los Angeles rapper Frost released two volumes of "That Was Then, This Is Now" in the middle of his still unfolding career. Not long after his son Scoop DeVille embarked on a production career that would lead to credits on albums by Snoop Dogg, 50 Cent and Kendrick Lamar. I use this introduction not simply because the debut of U-God's son iNTeLL goes by the same title, but specifically because iNTeLL himself isn't in Frost's position, who was one of L.A.'s earliest MC's and by the turn of the millennium could look back on 15 years of professional rapping.

Instead iNTeLL applies the phrase to his personal situation, reflecting on a time when he was emotionally down in the dumps. The revelation comes at the very beginning of his 2017 full-length, in a moving acapella segment. There's a disarming quality to the Staten Island rapper's honest and elementary approach as he details his ups and downs, breakups, layoffs, arrests and everything. Making sure he's understood (no mumble rap here), he uses basic musical and lyrical patterns, which have a tendency to come across plain especially within musically more conventional segments like the track in question, "A Brighter Day."

Produced by D.O.S., "A Brighter Day" tests the same elemental rap-meets-pop constellation as last year's "All-Amerikkkan Bada$$." More readily than Joey Bada$$ on his application for greater exposure, iNTeLL slides back into the familiar hip-hop neighborhood. "Stay Stanky" by Turkish producer Baykan Barlas is a solid interpretation of classic backpack hip-hop with considerable horsepower under the hood. Astro 'Jiggy' Jones samples "Superfly" for the later-'90s club track throwback "The Blackout," and Effdope's "Hunger Pains" sounds like something Brooklyn's AZ would rock over. iNTeLL also makes an effort to pick conceptual beats. Scopic submits a menacing Strange Music scenery for "Wear a Mask," Dom Staxx paints "Super Saiyan" in gothic hues and DJ Science makes up for the clunky rhythm section on "King Arthur" with depictive horns and Inspectah Deck and Killah Priest samples.

Apart from a perfunctory verse from the former on "Word of Mouth," "That Was Then This Is Now" doesn't exploit the Wu-Tang Clan connection to any greater extent. (Not always to its benefit: Killah Priest's guiding hand could have steered the potentially spiritual "What Would You Do?" away from the barrage of boasts that soon inundates the track.) Still the album cover's color scheme does recall Method Man's "Tical" and skits like "My Kung Fu Is Strong" and "The Internet" (which is reminiscent of certain Wu convos immortalized on wax) are evident hints at the rapper's heritage. He's a professed revivalist, longing to turn back the hands of time right to his year of birth when he raps, "Let's take it back to '91, right where I started from / They drinkin' pink and purple Sprite, I drink the darkest rum." Generally, however, he is keen on establishing his own identity and makes sure he's not overshadowed by big-name collaborators.

Ambition is palpable, if not always realized. "Get Busy" has a lot on its plate, but over a forceful, fashionable Q.iVory beat iNTeLL manages to organize a Nitty Scott feature, relay his mantra of getting ahead and getting things done and find a slot for a political undertone that is, to be exact, more Papoose than Joey Bada$$. A very special blend makes up "Containers." This extraordinary song connects the experiences of African slaves and the victims of current human trafficking, particularly children. "Been 150 years since they passed the Thirteenth / Still so many have yet to understand the word 'free'," he reflects, addressing a specific problem instead of preaching abstractly from the pulpit.

Other song concepts are more commonplace. "Super Saiyan" could be a 'Black Belt Jones' for manga/anime fans, yet the punchline at the center is too weak to carry the song and corresponding comparisons like "Black skin but my hair like Goku / Got Chi-Chi in the kitchen cookin' soul food" are few and far between. "King Arthur" salutes Slick Rick's "Children's Story" before iNTeLL metaphorically wields his pen like Excalibur "to battle all these authors / these wack rappity-rap yackety comp'ers." It's the second time he assumes an unplaceable accent (British? Caribbean?). He does the same thing for the fictional soundclash "The People Decide" where he plays two battling MC's. "Skynet" implements its the-future-is-now theme with lines like "The internet is self-aware" and positions iNTeLL as a rap John Connor. Although ignoring these songs' specific lanes musically, producer Big O happens to do the Wu legacy proud by lining up soulful ingredients for both tracks.

Since no grasshopper should forego the swarm intelligence of the Killa Bees or any other squadron, iNTeLL teams up with a short list of guests. Longtime associate DruGunn$ brings Onyx-like rigor to "Wear a Mask," "Rockstar" features Mickey Factz and Fred The Godson over a funky, tribal summoning by Iron Wind with engaging support from singer Frankie Ford, while "Hunger Pains" sees 'TeLL and S.I.T.H. ponder hard times in their past.

As an MC, iNTeLL has room to grow. His rhetoric can be shaky, his trains of thought erratic. Even though the delivery is deliberate and at times bold and original, iNTell can't yet fully impress his flow on tracks. But eagerness has its charm and ultimately he strives to combine clarity with creativity, not a common sight these days. It's also evident that the artist in his mid-twenties has some more stuff to say. There's a story not only behind "That Was Then This Is Now," but actually embedded in it, explicitly addressed by the first and the last track. As "A Brighter Day" mentions the shelter his grandmother provided, "Nanas House" takes an unflinching look at that period of his life, neither omitting the moments of desperation nor those of hope he experienced "up in Nana's house." Even with all the emotional baggage rappers drop in our laps these days, it's rare for rap to be this genuinely honest as iNTeLL is on "A Brighter Day" and "Nanas House."

Credit doesn't seem always due in the case of rap offspring. Yet like Christopher Rios' son Chris Rivers iNTeLL is steadily paying his dues. Both have come a long way and deal openly with one specific toll that their lives happened to take - depression. And so, like "Delorean," "That Was Then This Is Now," despite a few kinks, in the end makes for an inspiring listen.