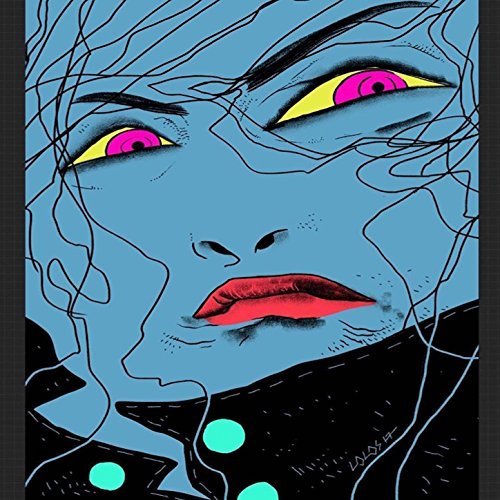 It only took 33 seconds of EYTREG's "aprilfll" before I heard something so warm and familiar that I got an instant buzz from it. It's unmistakable if you're a hip-hop head of a certain age. For me it's even more treasured as I own a specially pressed double vinyl of the album the song is on, one where each record was made in a color you could look through when held up in the light. I know vinyl snobs turn up their noses at colored records, and the reasons I hear are usually (A.) The quality of the grooves is substandard compared to solid black PVC and (B.) Only 180 gram vinyl records can produce a rich and deep audio sound. To them I say "So what?" The sample of "Saudade Vem Correndo" for Pharcyde's "Runnin'" off "Labcabincalifornia" remains one of my favorite songs off one of my all time favorite albums, so to hear EYTREG salute this same sample on his "One's Hidden Agony" album is an unapologetic nod to the late great J Dilla's loop. It's in no way accidental. Even though I didn't pick up on his rearrangement until a half minute in, he's making liberal use of the original in ways that even Jay Dee didn't.

Teppei Sano a/k/a EYTREG is a producer born in Niigata who currently makes his home in Tokyo, Japan. URBNET describes "One's Hidden Agony" this way: "EYTREG's music is an extraction of jazz, soul, RnB, and trap music, with inspiration and cues from legendary hip-hop predecessors." I definitely picked up on that with the respects he paid Mr. Yancey. They also add this: "His unique method of restructuring these genres and sounds results in the innovative creation of something that is his very own." That's what any producer of hip-hop beats should do though. Would you expect anything less from DJ Premier, Alchemist, 9th Wonder or J-Live? That's the POINT man. You take different elements from different sources, even wildly disparate ones, and you mix them together to create something beautiful. That's why the greats can be said to "cook up" their instrumentals, because they combine ingredients the way a chef does her/his greatest culinary works in the kitchen. There's not necessarily a recipe. A producer hears something and inspiration strikes. In that moment hip-hop music is born. Listening to EYTREG tracks like "hesvs" though you notice something that makes him different from the masses of producers with their beat tapes and/or vanity projects. Sano isn't just combining different instruments in fresh ways and using an occasional sample of a familiar hip-hop phrase to make you smile or give the track its name. If there is a "recipe" for beat tapes that's one that a lot of producers follow. Sano doesn't. Vocals are just as ripe for the picking. As the example above shows he isn't above using multiple bars of a freestyle in succession to either go with or against the grain of the beat that he's made. There's definitely an element of "jazz" to his work in that at times it strikes you as completely improvised. Jazz follows the beat but jazz can also lead it. Jazz can return to a familiar refrain but take you on a wild adventure in between or simply never come back to it at all - defying all of your expectations in the process. Sano's approach to instrumentals is jazzy not just by sampling it but by being as willing to think outside of the box as the jazz greats do, to the point where the box never even existed to begin with. Beat tapes can at times sound like a shopping cart for aspiring emcees. Call 1-800-BUY-BEAT and you can have this track for your next album. EYTREG makes that nearly impossible on "One's Hidden Agony." These aren't instrumentals to rap over. They are artistic instrumental works for their own sake. Even the songs like "rap" that have a lyrical component embedded in them are done in Sano's own unique way, where those vocals have been digitally distorted and shifted to enhance his musical expression. You can just barely make out the words, but doing so draws you further into his art, making you appreciate the layers of singing, drums and keyboards that he's woven together into one whole cloth. Even the song titles are part of Sano's art. Sometimes they seem to be discernible to the naked eye - a song titled "tha drgn" is clearly "The Dragon." Other times you'll be left completely dumbfounded reading names like "gdpooowl" and "dweeo." HUH? WHAT? Then there are the ones that fall somewhere in between like you can ALMOST catch the point like "dry_3" and "eex." This might be a literal case of "lost in translation" if Sano is deliberately using Japanese words and dropping vowels or consonants out of them. I know a smattering of words and phrases from watching anime and puroresu but certainly not enough to have a fluent conversation. I suppose that makes me a stereotypical gaijin, but I can definitely say there's nothing stereotypical about EYTREG's production. Whatever his particular agony is I'm glad he stopped hiding it to share this art with us.