The Mighty Rhino :: We Will No Longer Retreat Into Darkness 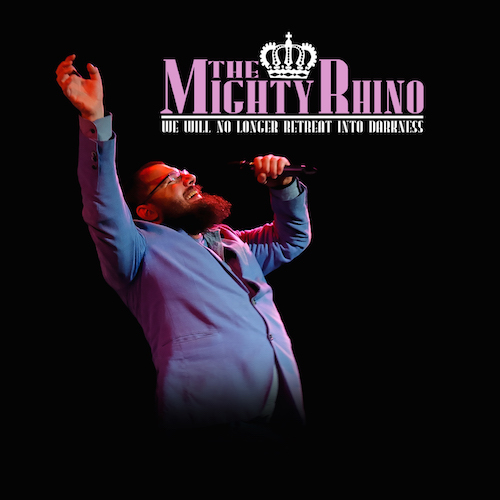 Words like "seven years after his debut" in a press kit are scary when you've never HEARD the debut they describe. Obviously that's not "scary" like a child believing there's a monster in the closet, or walking down a dark alley late at night with the feeling someone unwelcome is following you, but it's still hard to approach a follow-up album with no knowledge of what it's following. Sure you can watch "Return of the Jedi" without having seen Episode IV or V, but at some point it must occur to you that there are things being referenced that you don't know about. Once a press kit puts it in your face that someone has been around for seven years, it immediately makes you question what you were doing for the last seven years that you somehow completely missed their debut. It makes you consider whether what you have to write about that artist without knowing their history is even valid, and each word you type hangs over your head like an anvil suspended from a rope that is slowly fraying and unraveling as you watch.

Okay -- here goes nothing -- I'm just going to ignore that metaphor over my head and pray I finish before it comes crashing down. The Mighty Rhino is a rap artist from the North York suburb of Toronto, described in his own bio as a "Jewish enclave" that seemingly makes him more kosher than MC Serch and the Beastie Boys combined together. I keed Rhino, I keed. Have some of my matzo from the grocery store for a snack. I know as little about matzo as I do about Rhino, but the box was only 25 cents on clearance, and at that price I couldn't turn it down. The price of "We Will No Longer Retreat Into Darkness" was equally low for me. I'll guess it was also 25 cents -- probably about as much as the combined cost of the temperature controlled air I breath, electricity that powers my laptop, and internet collection that helped me download the promo copy. It's hard to turn either one down at that price. The more important question is whether or not you'd want to consume them at full price since you're not liable to get either discount as a consumer. I think that "Resplendent" is a good place to start with in measuring the value - it's worth at least four boxes of matzo, maybe eight. Two of my favorite emcess join him on the track - Prince Po and D-Sisive - and they create one formidable posse on the funky MisterE beat. Rhino's energy and delivery sounds a bit like Eminem, and just so nobody gets it twisted, I mean that in a very complimentary way.

That may not be the most indicative song when it comes to Rhino or his style though. For that I'm actually going to defer to "Stay Up," a song whose accompanying music video came out a couple of years ago, which also shows that this album has been in the works for quite a while. Digs produces an airy and refreshing instrumental that lets Rhino sing just as easily as rap, and he turns out to be pretty damn good at both. Some might call his level of positivity too saccharine, but (here's another metaphor) I could use a little sweetness in this bitter cup of coffee called life. I actually found myself singing along to the "doo doo do doo, doo" along with Rhino on the track. That's not to say everything is sugar and spice plus all things nice for Rhino. One track is unapologetically titled "The S--t That Will F--k You Up," but it's not a description of the world crushing down on you. Rather it's what Rhino and guest star Myka 9 can do to you musically with the strength of their rap and the Defckon beat. I've already noted several potent guest stars thus far but the caliber is equally impressive elsewhere - Big Rube (of the famous OutKast intros), Ultra Magnus, Jesse Dangerously, Witchdoctor (something of a Dungeon Family theme on this album it seems) and so on. Even the less familiar names like Adam Bomb turn out to be aptly named - he explodes on the Digs produced "Wolves In the Cellar." Uh-oh - I see that anvil swaying overhead - it's time to cut the review short before the cord snaps and all that weight comes crashing down on me. I like The Mighty Rhino. I might even like him as much as I used to like Rhino Records, back when they reprinted Fat Boys and Sugarhill Gang albums and released MST3K box sets. He's a tad on the nerdy side, but that's never a bad quality when it comes to putting lyrics together, and he clearly hasn't been sitting around twiddling a dreidel for the last seven years while I wasn't listening to him. His flow shows the practice of a craftsman looking to perfect his art, staying on time with the beats (and they are high quality ones) while not roboticly and rigidly sticking to them in a manner that one would find boring to listen to. He's good. Was he this good on his first album? I'll probably never know that but OH SNAP HERE IT COMES he'sworthyourtimetolistentoandIthinkyoushoulddothatsoBYE!!