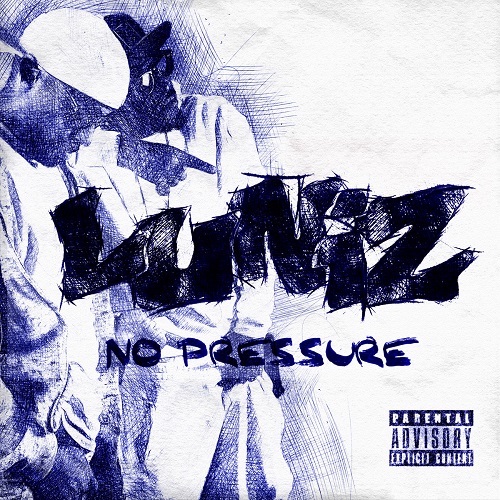 Flashing cameras and pressing questions accompanied hip-hop heavyweight Erick Sermon as he entered his solo debut, the scene staged real-time in the album's intro. The question that hung in the air as the studio door closed behind him was how he intended avoiding disappointing his fans (i.e. EPMD fans, basically the entirety of hip-hop at the time). Sermon didn't leave the issue unanswered, he let the music do the talking, coming back with an album that burst with genuine confidence, right down to its title - "No Pressure."

In a different time and place rap duo Luniz return with an album of the same name. Coincidentally it also opens with a live scene as a certain Linno the Winno reports from outside of Trump Tower with a few choice words for its owner (if he actually is the owner). Numskull and Yukmouth will share the sentiment later in the album, but first they want to assure the audience that they don't feel the slightest pressure coming back. They're not entirely convincing as Numskull opts for intricate lyrical patterns that don't exactly lend themselves to being expressed in a relaxed flow, while Yukmouth - whose actual forte once was being able to put on pressure - finds his mind occupied by what other rappers do, resulting in a number of rather forseeable rants. This is not what being above things sounds like, and the anemic beat by C-Dash and the uninspired crooning by Hippy Creed don't help either.

The musical make-up is a problem throughout the album, with a few rays of hope shining through. Num tries his hands at beatmaking and scores one of the more successful compositions with "Surrounded by Warriors." Here Mistah F.A.B. joins the Luniz to celebrate the Golden State Warriors, who in the meantime won their third NBA championship while calling Oakland their home. Driven by a classic Busta Rhymes clip, the track translates the elemental nature of the game by using metallic tones somewhere between scraping and sharpening. It's like Timbaland going dubstep and it works surprisingly well as the trio add to the history of memorable rap odes to b-ball, Num opening the score:

"I'm in that blue-and-gold in the Town, with a 30 reppin' Curry
It's a 'Looney' on the team, and he 'got 5 on' his jersey
The threes so purty, we lead so early
Cause Green makin' 'em miss 'em like we miss Furly"

That the video, posted a year ago, seems to be stranded in online backwater still doesn't fully explain its low stats. But regardless, with the league's dominant franchise about to leave Oakland for San Francisco, "Surrounded by Warriors" serves as a testament to the team's ties to both the O and the Bay as a whole.

Signing his productions with Nummynum, Numskull displays at least diversity in his efforts. "Keep it Moving" grooves nostalgically while lyrically he adds some Bay flavor to the rap-game-as-woman metaphor. For "One Nation" he tries the same thing musically with stereotypical Bay synths intervening into a "7 Day Theory" type track, an idea that doesn't even sound good on paper. But together with Outlawz member Noble they manage to honor Tupac's project to unite rappers from all corners of the U.S., a vision Numskull apparently still shares:

"Fulfillin' my promise to make a nation of thugs
and smotherin' muthafuckas that's racist to us
Pac couldn't finish it, so he gave it to us
Turn it out by any means, we gave in enough
We rose from concrete, we rose honestly
And for every rose lost a whole row grows, I promise we
won't lose sight of your vision
We on mission, it's ride or die till it comes to fruition
Nummy'll let 'em know if they listen
Get out of that choke hold and put them in submission"

More of that kind of conviction would have been needed to turn "No Pressure" into a convincing comeback. It's a mystery how "Let Us Through the Doe" intends to achieve its goal, being a club track without any thump and all. Mike Mosley's "Don't Play" comes at least ten years too late, Ghost's "Gang Gang" would have been fresh five years ago, and Chuck Heat's "Leggo" still thinks it's a good idea to mimick "Drop it Like it's Hot." If you can rejoice in references to times past, perhaps you'll dig Yukmouth's "Me and the Boyz move weight, ship out the Heavy D / I'm a rapper that rob niggas - Steady B / And still Born to Mack - $hort and Freddy B."

The instability of this new Luniz album is such that even issues that you would usually overlook come to the forefront, such as Numskull's hostile attitude towards women. A particular conundrum is proposed by the track "Party Like Prince Will." As singer Farisha offers that she's "back from the dead like a zombie" and the rappers repeat the phrase "party like...," you would expect a more or less dignified homage to the Purple One. Party like it's 1999, or rather like sometime in the future when Prince returns to planet Earth. Something like that. Instead they claim to party like Prince William, the Duke of Cambridge, which is not only an absurd analogy for two longtime West Coast rap stars to make per se but also ignores the fact that William's brother Harry was known as the Party Prince.

Good rap albums do not invite such aimless thought wandering. The young rap duo called LuniTunz who was part of Dru Down's "Fools From the Street" and later could be obtained in stores worldwide via "Operation Stackola" possessed a hunger and fervor that had much more in common with the focus of Erick Sermon at the time of "No Pressure" than what they present on their latest release. "Stackola 2," as Yuk suggests somewhere, it is definitely not. If it's true that "the golden era was the '90s and the '80s / now this rap shit lookin' real shady," the Luniz in 2018 are as much caught up in it as everyone else.