Illingsworth :: You're No Fun 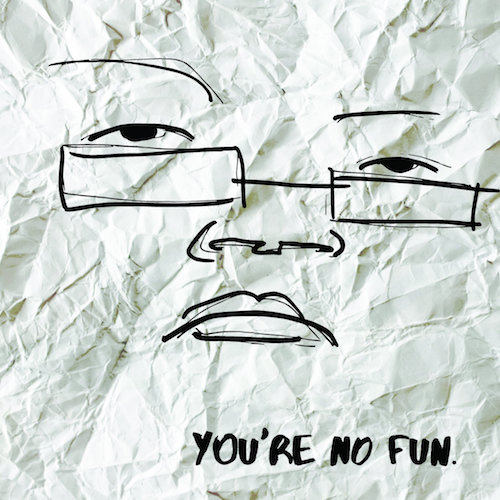 The self-titled opening track of Illingsworth's "You're No Fun" describes what might possibly be the least desirable man/woman/other to ever live -- either that or the most annoying. "Just to avoid your presence I might send a prayer up" quips Ill, seemingly seeking any way out of a room just to avoid brushing into or conversing with the antagonist of the song. The list of complaints about them is both extensive and detailed:

DAMN. That's just in the first minute of the song. The funny thing is that this funny song is not really emblematic of the album despite being named after it (or vice versa). Illingsworth is a Detroit based producer who for better or worse gets compared to J Dilla like almost every up-and-coming beatsmith from Eastern Michigan. At least people mean it as a compliment to do that but you can't throw a rock without hitting somebody who has "that Dilla sound." In listening to "You're No Fun" I actually found more in common with Moka Only than Dilla, save for the fact Ill raps significantly less than Mr. Only. The same penchant for unorthdox experimental musical productions is there. Once in a while Ill drifts into Soulquarian territory on instrumentals like "Sama" but I consider that either the exception or an unintentional tribute to Yancey.

Even though this can be considered a "beat tape" for the most part (which is probably another reason he gets compared to Jay Dee) there are tracks which show off the power of potential collaboration with Detroit's latest MMG representative. "Peeves" featuring Open Mike Eagle has the indie rap star flowing over a mix of chopped up instruments and beats while complaining "I hate submarine sandwiches and sub-tweets". Some listeners might say his complaints are "millenial" or "hipster" but I think those terms are even MORE overused than comparing producers to Dilla -- and besides the song makes me laugh.

The only other person other than Illingsworth to feature on "You're No Fun" is Denmark Vessey on "DnD." The amount of material I can share with you from this album is purposefully limited since it's in pre-PRE release right now and not officially dropping until two weeks after this review does. What I can tell you is that while you'll appreciate the lyrics when they do happen, you won't be regretting their absence when they don't. The head nodding piano jazz of "Time Machine," the funky synthesized sound of "Mach Punch" and the VERY Dilla-like track "Go On Back" all work for equal and completely different reasons. Illingsworth proves himself a diverse enough prodducer to not be compared to just one man -- in fact he's completely his own man.