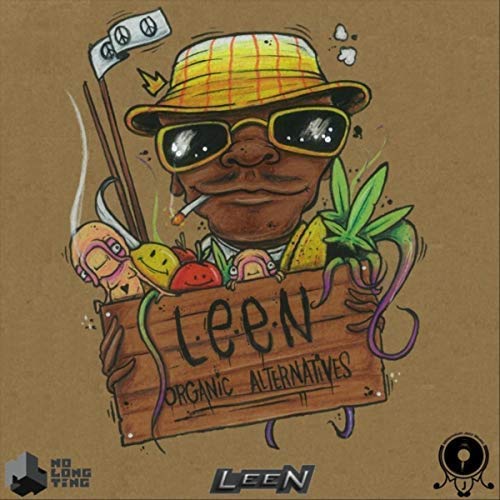 Jesse-Lee Norville b/k/a LeeN is "a freestyle rapper and facilitator" who counts Damian Marley among his influences and describes himself this way: "I'm a master of ceremonies. Whether I'm with my deejay, no deejay or a band doesn't matter -- I adapt to the situation." The first part was easy enough to pick up on given he named his album "Organic Alternatives" and is pictured in a cartoon caricature on his album cover with a big box full of produce. Many reggae musicians and Rastafarians in particular believe "ital is vital" and practice a vegetarian/organic diet. If it doesn't grow from the earth, it's not meant to be consumed. Now to be clear I've never seen an article or interview where Marley specifically said "I'm a vegetarian" but he's been growing out his dreads for over 20 years, and the locks are another sign of the faith, and tracks on the album like "Contentment" sample from Damian's father Bob Marley, perhaps the most famous Rasta of all time. I'm operating on the premise the father passed his values down to his son.

Getting back to the perhaps aptly named LeeN though (a vegetarian diet often results in a leaner physique), the rapper's album was passed along to the site via Millennium Jazz Music, and they described LeeN's style as "fun loving food for thought" so there's no doubt about the vegetable friendly theme. The sound is a nostalgic throwback to the Afrocentric rap era of the late 1980's and early 1990's, where it seemed the entire rap scene was consumed with what LeeN describes as "peace, positivity and power for improvement" on "The Movement." The only different would be that LeeN has a UK as opposed to US accent. If you had any doubt about his British origins the collaborative track "Here Now" featuring Benny Diction and Gadget would clear that up pretty quick. The first verse sets it off immediately by shouting out the locals, discussing political parties that UK listeners would be familiar with, and generally distinguishing the album from "yanks" in all ways in just a few bars. As such I'll even throw the "U" into spelling a few words.

"It's like my UK neighbours come in all flavours
Some are conservative, some'll vote Labour
Some'll vote UKIP, which is just stupid
But who am I to judge how they do s--t?
There's a whole lot of foreigners who fit right in
There's a whole lot of locals who won't like your skin
So keep your head down, and try to do your thing
Get the money up, so you can live like a king"

On the other hand it may not be so different from the United States after all. "Britain seems bigoted ever since the Brexit/right wing racists wanna talk reckless." I could say the exact same thing about our country since POTUS 45 ascended to his monarchial throne. I enjoy the vibes on LeeN's solo track "Said It Right," but it turns out to be the exception on "Organic Alternatives." Kyra is his most frequent collaborator, providing her vocals on six tracks, but you'll also find Gadget on "Hannibal" and Sweff on two tracks including "A Taste of Sin." LeeN walks the line between being the star of "Organic Alternatives" and the featured artist of a compilation album, but I'm happy to say he veers far enough toward the former that you can really get a taste (there's those food references again) of what he's all about. Many tracks are on the short side with only "Organic" and "Here Now" being over three minutes long, but that makes "Organic Alternatives" a quick and enjoyable musical bite to digest at your convenience.