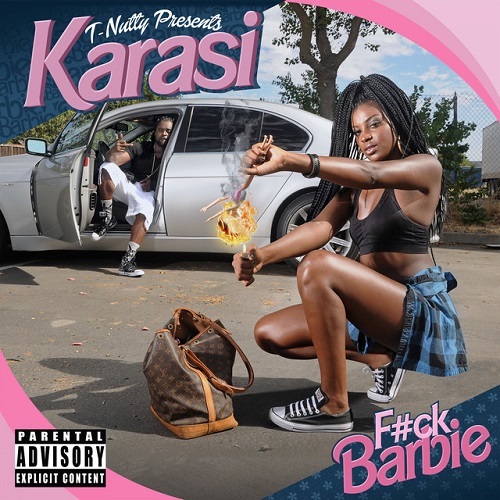 More recent marketing slogans Mattel devised for their world-famous Barbie doll include 'You Can Be Anything' and 'Be Who You Wanna Be'. So what is Karasi's problem with Barbie exactly? Perhaps like many before her she takes issues with the image of an absurdly proportioned, stereotypically blonde and blue-eyed model being imprinted on girls for life. Or she's arrived at (or remembers) that period in a teenager's life when it's time to let go of childhood for good. We may also have to consider that she shows (or emulates) completely normal behavior. 'Barbie mutilation' has actually been an object of study, as Associated Press reported in 2005: 'The iconic plastic doll is often mutilated at the hands of young girls [...] The types of mutilation are varied and creative, and range from removing the hair to decapitation, burning, breaking and even microwaving [...] While boys often expressed nostalgia and affection toward Action Man — the British equivalent of G.I. Joe — renouncing Barbie appeared to be a rite of passage for many girls.'

"F-ck Barbie", Karasi's debut, doesn't explain the beef, specifically setting Barbie ablaze on the cover. But a promo sheet for the Sacramento rapper reveals that 'the statement 'F-ck Barbie' was created as an ode to all women who are real, smart, down-to-earth and solid.' As it pertains to this particular young woman, it seems that Mattel's continued efforts to equip Barbie with qualifications and jobs (reportedly 150 different careers, including presidential candidate in 1992 and - the same year - 'Rappin' Rockin' Barbie') as well as diversity in regards to body type, skin tone, hair color, wardrobe, etc. were totally lost on Karasi. Which is ironic because her art is very much about being young, black and female in "America." From the opening track of the same name:

"Screamin' 'F--k the police', middle finger to the rolleys
Pardon, in emergency I'm dialin' up the homies
Pull a trigger, kill a nigga, then I watch the shooter go free
Not guilty, the nigga caught the judgment, disgustin'
We went from lynchin' to shootin' niggas in public
But that's just America, stand for America
Hold your heart under your hand for America
Too much corruption, nobody cryin' for nothin'
The black babies are dyin', our black mothers are sufferin'
What f--kin' justice? You seen the footage, you know he done it"

Granted, the female perspective is not immediately evident in the song, but when you're done listening to "F-ck Barbie" you'll have no doubt that you have been witness to the toughts and talents of a confident and competent young woman. Candidly Karasi lets us know who we're dealing with: "I'm young and I'm black / I'm a woman at that". Unlike many of her peers she expresses herself exclusively through rap. She is less about creating moods than about making arguments.

The cut that follows "America", "Industry Niggas", doesn't earn her a lot of crediblity in that regard as she comes rather close to your average rap amateur's understanding of 'clever wordplay' and fails the obvious role model Nicki Minaj (whose adoption of Barbie, while we're at it, is decidedly creepier than Karasi's rejection). Plus the "I just happen to rap" rhetoric runs contrary to the ambitions as a writer 'Rasi displays elsewhere. Take "Pour Up", where assertiveness lurks beneath a relaxed flow, following in famous footsteps left behind by the likes of Jigga and T.I. Or the innocent but all the more effective childhood recollections that kick off "America".

When Karasi teases ("Might mistake me for a video vixen"), she always stops at a certain point and then goes back to business. Consider this couplet from "Pour Up": "I change moods like Kardashians change shoes / I change moves like Kardashians change dudes". She might use them as a reference point, but she simply doesn't seem to be into the same things they are. She has a working girl attitude that can't be bothered with namedropping designer brands. Quite the contrary, "Go to Work" reveals that if you're working under her regime, you might not be able to change clothes for a couple of days. Take that, fashion influencers!

So what's the work that remains to be done on Karasi's end? The issues are mainly of a technical nature and they fall into the responsibility of the people who recorded her. The vocals are almost constantly mixed too low, and the tracks are affected by scanty mixing/mastering as well. "America" is produced by Nipsey Hussle collaborator Kacey Khaliel, you hear lush strings, there's a soulful vibe simmering somewhere below, but the track overall comes across so flat sonically the power of the words is greatly diminished. The combined experience of producer L Finguz, singer G Swiv and rapper T-Nutty can't prevent "I Like to Flirt" from floundering musically. And at least in one case it sounds like she had been given exactly one opportunity to lay down her raps. Karasi braces herself against these odds by putting her back into her performance, and if there's one advantage to the rough-hewn approach, it's that her energy and enthusiasm come across unfiltered. On the other hand, do we really want to go back to the mixtape heydays when quantity triumphed over quality? "Poison" for example is guilty on all accounts, from the fact that the wasted potential is painfully audible to the abrupt ending.

Thankfully not all tracks are similarly affected. On "My People" low-pitched synths reflect the rapper's focused mindstate, creating an ideal backdrop for her economic flow and measured rhetoric ŕ la "Livin' to die, you're dyin' to start livin' / The situation dire, too seldom are f--ks given". "Pour Up" has already been mentioned favourably, "Angels & Demons" is both thoughtful and soulful, and with the sobering suggestions in the form of "Not a Crook" Karasi does every rapping hustler proud that came before her, lyrically and vocally styling while, as one of her colleagues once put it on a big hit, "kicking Game with a capital G":

"Don't let me in the game, I got the cheat code
Swear to never violate the G code
Know when I'm negged I'm in beast mode
Better grab your peacoat
I'm negative-degree-cold
Gotta keep it 100 like a c-note"

Not one to limit herself to a particular style, Karasi also pursues more trivial pastimes. "What You Sayin'?" is a double date between four vocalists that is high in contrast, really the kind of song that only the union between rap and R&B can produce. The Blocc the Boss-produced "The Truth" features female cohorts Baddie Millz and Lil Marvaless - although the latter's appearance cannot be confirmed 100%, whereas her mom, Sacramento legend Marvaless drops what would have been the ideal last word on "Black Fists & Afros", were it not followed by official closer "Keep it Lit", another more lightweight team-up with mentor T-Nutty.

Some current rap releases successfully circumvent the reality of their surroundings. From listening to them you wouldn't know we're living in the era of #MeToo and Black Lives Matter. "F-ck Barbie" is not among them. Some current rap releases are oblivious to the fact that there can be actual skill involved in this form of expression. "F-ck Barbie" is not one of them.