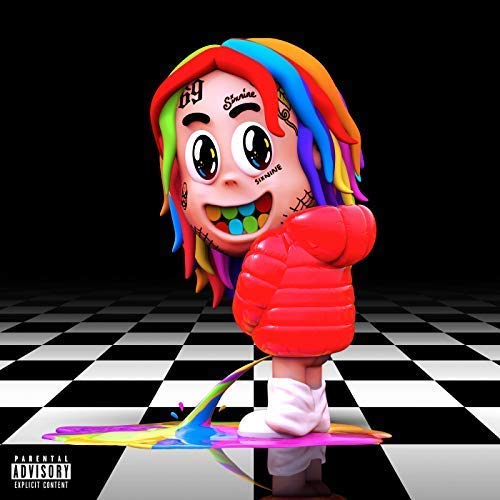 I can't blame Matt Jost and his excellent review of 6ix9ine's last mixtape for the sense of trepidation I felt going into "Dummy Boy." The dread I feel is directly related to what happened to XXXTentacion just twenty-four hours before I published my review of his album. The list of coincidences between the two is uncanny despite the fact X was from Southern Florida and 6 hails from Bushwick: numerous problems with the law, highly toxic public feuds with other artists, a dedicated following developed over numerous mixtapes, and a seeming inability to curb dangerously hedonistic pursuits that would destroy the fame and fortune they recently acquired. Here's the key difference - X died right before I published his album review even though it had been out a few months, while 6 is happily alive and kicking for NOW. I stress the latter because 6 was arrested 9 days before his first studio album on federal RICO charges including conspiracy to commit murder and armed robbery. Despite offering to surrender his passport and post two million dollars the presiding judge denied bail and ordered his incarceration to continue, undoubtedly due to his already lengthy rap sheet.

Writing this review gives me the feeling that 6 is headed for the exact same fate as X. When you make as many enemies as either man has made at such a young age the odds of living to an OLD age decrease significantly. The (unsubstantiated) rumor mill already has fellow inmates taunting him and/or feeling resentment toward alleged preferential treatment he has received such as not being mixed in with the general population. It may sound like the script of a movie to suggest someone he has feuded with such as Chief Keef or Tadoe would put out a hit on him in prison, but what just happened to "Whitey" Bulger is a reminder you're not any safer in jail than on the streets -- maybe far less. I can only suggest that Mr. Hernandez grow a pair of eyes in the back of his head. At the very least he's going to need to keep his friends close and enemies closer, because even if he beats the case and gets out of jail the long list of people he beefed with won't have gotten any shorter. The one thing he's got going for him right now on "Dummy Boy" is the number of high profile friends he's made since he first came on the scene as Tekashi69. Example - Nicki Minaj appears twice on the album - once on "Mama" and once on the album's second single "Fefe."

Second example - Kanye West appears twice on the album - once on "Kanga" and again on the aforementioned "Mama," making the track a SUPER star affair and a highly likely candidate for a future single. It certainly can't hurt 6 to have two of the most commercially successful artists of the last decade+ in their corner, although both could just as easily disassociate from him and hang him out to dry. What did P. Diddy ever do for Shyne other than let him do the time? Loyalty can be very fickle among rap superstars. One thing that doesn't seem fickle though is 6ix9ine's dedication to his Latin fans, as he mixes in his heritage and rhythms on crossover tracks like "Bebe." And on songs like "Gotti" he's trying to change his image from a Teflon Don to a hood philanthropist, cheerfully handing out money to the young and old in what one can only presume is his old hood. Credit where it's due, the production on "Dummy Boy" is amazing. Tay Keith, Scott Storch, Murda Beatz and Ronny J among others lace 6 with some beats that match his "wavy" sound and style perfectly. The tracks are heavy on the bottom and have lots of room for 6 to flex his sing-song melodic flow. Like Mr. Jost though I have to at least make mention of the fact that all of that shine doesn't necessarily polish up the lack of lyrical depth.

"These b---hes think I'm stupid, I ain't stupid
Dummy boys fall in love with it, he stupid
All these hoes on my body, cut the bulls--t
All these hoes, they ain't loyal, y'all lookin' stupid
I just left Starlets and I ain't even cash out
Back out, straight to the trap house, I blow her back out
I'll pull her tracks out, got her running like it's track now
Like a SmackDown, +Rock Bottom+ I'ma pin her down
Hold up, let me get it started
B.B. with the Robins, lookin' all retarded
B.B. saggin, fly like a dragon
B---hes suck my d--- cause I'm fly like Aladdin" - "Tati"

Even a pro wrestling reference doesn't make up for how corny "fly like Aladdin" is, though I give him props for delivering the line in a hard straight up flow instead of a musical way that would have made it cheesier. In fact I like the songs like "Kanga" where he just straight up rips the most, because he sounds like a cross between Fatman Scoop and Fat Joe. 6ix9ine would make one hell of a hype man if he wasn't a star in his own right. The question is how much longer will 6ix9ine be one? Life behind bars isn't necessarily an impediment to a rap career any more, but it certainly makes it impossible to be the flossy, rainbow colored public figure he has been in the spotlight of late. No one can see a rainbow behind gray walls.