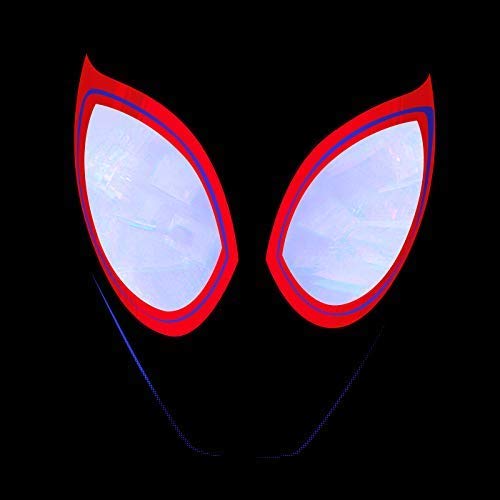 It's been a minute since I felt like a movie had a ONE HUNDRED PERCENT hip-hop soundtrack. There are almost always concessions to the mainstream or crossover audience that major motion pictures are aimed at. Even if 80% of the songs are rap bangers, 1 out of 5 winds up being a pop song or a R&B track with a hip-hop cameo, and those wind up being the songs that get used in commercials and charting on FM radio. A lot of things surprised me about "Spider-Man: Into the Spider-Verse" though, not the least of which was just HOW MUCH hip-hop attitude was in the film. They could have subtitled it "Miles Morales: A Brooklyn Kid's Story" and it would have been just as accurate. Even though he's an scholastic prodigy who gets into a prestigious academy, he would just as soon be hanging with his friends at his old school and throwing up tags in the subway with his Uncle Aaron. (Spoiler alert - if you haven't seen the film yet, Miles' relationship with Aaron takes a tragic turn. That's all I'll say.)

It only makes sense that the soundtrack for "Into the Spider-Verse" reflects the decidedly urban narrative of the film, and after sleeping on the Miles Morales dimension for a minute because I grew up with Peter Parker, I can also say it's far too simplistic to call him "the hip-hop Spider-Man." I don't want to go too deep on this because we're here to talk about the album, but what makes Morales work is what made Spider-Man work when I was growing up -- he's a young man who felt powerless accidentally imbued with an OVERWHELMING amount of power. He desperately wants to do good things for people but he's also struggling with adolescence, anxiety and angst. We even get to see in Peter B. Parker (who it turns out is OUR Peter Parker from the "home" dimension) what happens when those inner demons manifest in an ugly way, turning him into a washed up reluctant superhero who has to rediscover his purpose. Morales needs to both learn from him and learn how to NOT be like him. In the unlikeliest twist I never imagined, Swae Lee and Post Malone's lead single "Sunflower" fits that dichotomy perfectly.

"I know you're scared of the unknown (known)
You don't wanna be alone (alone)
I know I always come and go (and go)
But it's out of my control
And you'll be left in the dust
Unless I stuck by ya..."

I hadn't counted on one half of Rae Sremmurd and one of today's most maligned commercial rap stars capturing the mind and mood of Morales so well, but this is one of those times where the tuned up sing-song of the current generation nails it. It even makes sense from a storytelling purpose. If Morales was a kid living in the world today, it's exactly the music he WOULD be listening to in his headphones. Much as we might want kids to be growing up on G. Rap, Ice Cube and Geto Boys it just doesn't work out that way (though Biggie's "Hypnotize" does at least get a cameo in the film). For better AND for worse this soundtrack accurately reflects the currently trending sound of today's rap artists as we exit 2018 and head into 2019. Almost everyone you would think of as a star in the last 12 months is here. From the late XXXTentacion appearing on "Scared of the Dark" to Amine telling us how "Invincible" he is to Juice Wrld just wanting to "Hide" from everything it's all right here in black and white (like a Spider Noir comic). This leaves me a little conflicted because even though the music is contextual to the time of the film and situationally appropriate when and where it's used IN said "Spider-Verse" the accuracy with which it reflects present day hip-hop skews heavily in one "wavy" direction. Even the Vince Staples contribution "Home" leans toward ALMOST being that, with his vocals being heavily modulated and distorted, though the actual singing comes in the chorus. The counter balance I was looking for never quite arrives. Jaden Smith or Nicki Minaj had the potential to break us out of it, but their contributions blend right in. Duckwrth and Shaboozey come the closest to shaking things up on the aptly named "Start a Riot," but the rest of the album ends up being 41 minutes that more or less blends together. That's a weird thing to fault a soundtrack for I admit - taking a theme from the film it was "inspired by" and capturing it - but the movie at least breaks it up with a bunch of kick-ass fights, crazy supervillains, and hard choices for the heroic protagonists.

I think in the end it's fair to say I actually appreciated this album in context out of context. In other words I appreciate that it's a hip-hop soundtrack for a movie that had much more hip-hop attitude than I expected going in, and therefore even though some of the artists are suspect when it comes to their actual lyrical content, I find that it MOSTLY works. While moments like the DJ Khalil produced "Elevate" are too few and far between, I'm in a forgiving mood just because this soundtrack did something none I've listened to for a long time tried let alone succeeded in doing -- making a 100% hip-hop soundtrack with no compromises.