:: Cold Chillin' Records
** RapReviews "Back to the Lab" series **
as reviewed by Steve 'Flash' Juon 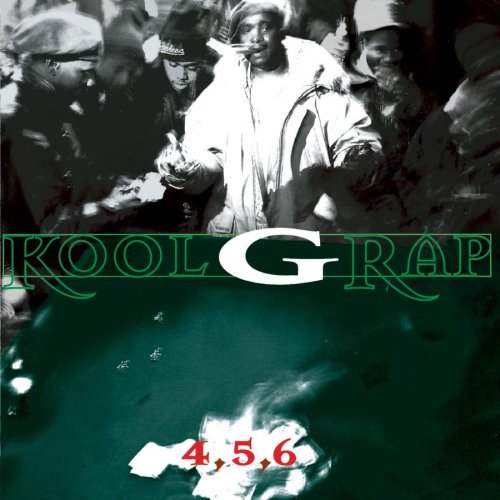 Already a hip-hop legend by 1995, Nathaniel Wilson b/k/a Kool G Rap had the unfortunate dilemma of being too big to be on a tiny imprint and too notorious to be on a major label. An unwarranted controversy arose from the cover art of 1992's "Live and Let Die," where the duo of G Rap and DJ Polo appeared to be depicting the POSSIBLE execution of two law enforcement officers. I didn't quite grasp the full implication at the time, so if you picked up on it I give you credit for being more perceptive than me. I was so focused on the emcee and deejay dressing up like armed bank robbers in the foreground that I wasn't paying attention to what was going on in the background - two men standing on chairs with nooses around their necks standing on chairs. Even less obvious was that the two snarling dogs between the foreground and background were TIED to these chairs and being lured away with a handful of raw meat. Once you picture the dogs yanking the chairs from under the officers feet to get the meat the grisly picture is suddenly complete, and even though I didn't get it at the time Warner Bros. Records certainly did and promptly blacklisted the rap duo, blocking distribution of the album and forcing the album to be shelved -- but not before I already had a copy of my own.

This review isn't about "Live and Let Die" though, and that's certainly a worthy (and requested) topic for another day. Instead I'm going to take you through the aftermath of that decision, which led to Kool G Rap and Polo splitting up to take up different directions artistically and commercially, and undoubtedly hoping that the controversy of the album cover wouldn't follow them in future endeavors. The thing is that I can't find any evidence this worked out for Polo. If you can do any better than I did looking up key phrases like "DJ Polo solo albums" more power to you. It's perhaps unfair to say this given that without Polo there would never have been a demo, a record deal, or three classic hip-hop albums, but it really doesn't matter. I'm not purposefully intending to be disrespctful to Polo, it's just that nobody bought the albums because of him any more than people bought Rakim albums because of Eric B. As a soloist G Rap was going to be just fine and hopefully DJ Polo moved on to an executive role in the industry and continued to clock figures off mechanical royalties on the side. Meanwhile in an ironic twist of fate G Rap's "4,5,6" would wind up back on Cold Chillin' Records now that Warner Bros. was no longer their distributor, but it would also turn out to be their last release before that legendary closed their doors.

As swan songs go Cold Chillin' really couldn't ask for a better way to go out and in yet another twist of irony "4,5,6" remains to date the most commercially successful album of G Rap's entire catalogue. The album benefits heavily from the Buckwild produced single "Fast Life" and its guest appearance from rising hip-hop star Nas. It was a natural collaboration given both rappers hailed from Queens, but even they couldn't have anticipated just how much crossover appeal the song had commercially. G Rap's songs have generally presented unapologetically gritty and grimy street scenarious portrayed with his vivid wordplay and crispy lisp, but in this case G Rap decided to also portray the perks that come with traveling down the "Road to the Riches" and live it up just a little bit. Over the bubbly Buckwild background the loquacious lyrical team presented a glamorous portrayal of the American Dream, Tony Montana style.

G Rap: "Champagne wishes of caviar dreams of peanuts, gettin cream
With sales of fish scales from triple beams I gleam
Livin' the life of Riley packin' fifty calis
Rockin lizard Bally's while we do our drug deal in a dark alley
Up in casinos just me and my dino primo
Pushin beam-o's then parlay in Reno with two fly latinos
Nas, he runs the whole staff, we count mad for seen bad
We've seen a half a milli dashin out there on the Queens half
Three major players gettin papers by the layers
And those that betray us on the block get rocked like Amadeus"

Less commercially successful but just as dope (if not doper to me personally) was the Naughty Shorts produced single "It's a Shame." Ably sampling from "Love Is For Fools" by Southside Movement, who I honestly had never heard of before this record, the song oozed with funk and featured an uncredited vocalist crooning that there "ain't no sleepin over" as the Kool Gangsta of Rap laid down his mafioso hip-hop like a true don of the drug trade.

"The Highness, kingpin of heroin
I'm thorough when I have to bring the terror in
Handle business in each and every borough in
town or city, I'm rollin like Frank Nitty, I'm rich and pretty
Back up kiddies, I got crimies that's grimy and gritty
A nigga that's spunky and likes to keep his pockets chunky
Makin most of my money, from all the dopefiends and junkies"

Even if you don't own "4,5,6" there's a pretty good chance you know and/or have heard those two tracks, but the album has plenty more to offer. The Dr. Butcher produced title track is as dope as it is ominous, perfect for the Halloween season we're in right now, perfectly encapsulating the glamour and danger of playing street dice. Buckwild's magic is in full effect again on "Blowin' Up in the World," to the point you wouldn't be blamed if you mistook it for the gangster jazz of Black Moon's "Enta Da Stage." Some of my earliest exposure to MF Grimm came through tracks like "Take 'Em to War" and "Money on My Brain" (both also featuring B-1). For me though I really want to know what happened to Naughty Shorts, who dropped two golden G Rap tracks on this album, then seemed to go just as far off the radar as Polo did if not moreso. The harrowing piano keys of "Ghetto Knows" really set off G's rap lovely.

"Strollin the concrete, packin my heat, walkin the backstreets
I seen niggaz pull up, peepin me out the side a black Jeep
Six feet deep, that's where I'm goin if I'm slippin
Steady cockin my shit cause I already got the clip in
Now who's the first nigga to run up, here they come up
the block hardrocks with glocks rollin holdin they guns up
I buck, I buck, and then I struck one in the chest
Nigga shoulda wore a vest but now his ass is put to rest
But now I got three mo' niggaz, pullin triggers
Strays are ricochetin off the bricks, zigga zigga
But who got the biggest strap? Who's bustin bigger caps?
My BOOM BOOM BOOMS against they PAP PAP PAPS"

It would be severely overstating things to call this album the pinnacle of G Rap's career lyrically or musically. DJ Polo still gets that certification as one half of one of hip-hop's illest teams, because I can't put "4,5,6" above any of the three albums that precede its release. Respect where it's due though because at a time where it seemed like Kool G Rap might be forever stuck in artistic limbo due to record label shenanigans and censorship he bounced back with an album that over 20 years after its release still sounds like a "must have" for fans of his rap style.