4 Deep :: Another Day in the Jungle

:: Power Artist/Ichiban
** RapReviews "Back to the Lab" series **
as reviewed by Matt Jost 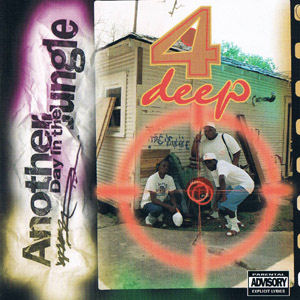 The MC/DJ duo O.G. Style were Houston hip-hop pioneers who sadly are no longer with us. Shortly before or after he and rapper The E parted ways, DJ Boss briefly worked on a couple of Rap-A-Lot projects in 1992 and then left the label to form 4 Deep with his brother Rodney 'Koo Rod' Brown and Chad 'Klas 1' White. Their 1993 debut belongs to the handful of early Houston rap records outside of the Rap-A-Lot catalog yet is still very much in the vein of releases like "Mr. Scarface Is Back" or "Convicts."

The album is split into a rawer, more confrontational first half that revolves around dope dealing and turf rivalry, and an at least musically more laid-back second half. Telling the rappers apart proves at times difficult. Not only does Boss show up on the mic several times, they all cover roughly the same vocal range and tend to lose their individual timbre when they rap at a higher volume - which they do quite often. Still those familiar with Scarface should be able to identify lead rapper Klas 1 since he has a habit of patterning his delivery after H-Town's MVP not just in terms of vocal tone but also cadence and writing.

As we noted, the O.G. Style debut "I Know How to Play 'Em!" stood out in the wave of early '90s Rap-A-Lot releases as a rap album that dispensed with the gangsta attribute. Without The E on board and with gangstas making the rap world go round by '93, the tone of "Another Day in the Jungle" was decidedly different, perhaps best illustrated with the following quote from Klas 1:

It's tempting to typecast "Another Day in the Jungle" as typically unrefined street rap. Admittedly there are no deeper musings that go beyond the simple do-or-die option 4 Deep claim they are faced with. But compared to more recent street rap this early variation distinguishes itself with more concise songwriting. When 4 Deep begin a verse they usually stick to its script. They narrate rather than engage in boundless blustering. You'll rarely get such a focused account of a drug dealer's purgatory as Klas and Koo give from track 2 to 6. On the title track they lay down the law of the jungle aggressively over dominating drums, Rod declaring:

"Rule number one: never trust a motherfucker
Oh yeah I love her, but I don't trust my fuckin' mother
That's why you'll never see my empire crumble
Only the strong can survive the fuckin' jungle"

Over the bubbling gumbo funk of "Doin' Bad - Goin' Bad" he assumes the responsibility as head of the family:

"There's money to be made, so I gotta make it
And I'll be damned if I let another nigga take it
I done made up my mind, I can't turn back
Illegal business is my trade, I manufacture crack
Cause a nigga gotta survive in yo society
So comin' up, fool, is top priority
So if it don't make dollars, then it don't make sense
Pullin' up lint don't pay the fuckin' rent
I'm gettin' paid, so motherfuck your welfare
Got my girl stressed, pullin' out her motherfuckin' hair
Cause she don't know if she's gonna eat today
Have a place for her and my kid to stay
So I had to step in to provide for her
Cause that son of a bitch Uncle Sam lied to her
Hard work paid off, so now it's peace time
So baby get your ass out the fuckin' cheese line
From now on, hoe, you can have it yo way
And if you want, every fuckin' day is yo day
Bein' broke ain't no motherfuckin' joke
So if I gotta do it, huh, I'ma sell my dope"

Always coming from a first person perspective, they highlight both external circumstances ("Got my diploma and that bullshit degree / Straight to unemployment's where that motherfucker sent me") and inner conflict ("I'm only 16, I'm headed straight to prison / Kill or be killed - even though I'm a Christian"). "Can't Turn Back" is the resignation that follows the realization that there's no way out, "Take That" is the aggressive reaction to that situation. The climax comes in the form of "Ain't No Luv," where Klas, accompagnied by the same Bobby Bland sample that appears in Jay-Z's "Heart of the City (Ain't No Love)," accepts his inevitable fate:

"Six feet deep, a nigga headed that way
Cause I'm steady committin' sins every day
Pops is a junkie, my mama's a slut
But I don't give a fuck, I still hit the cut
I'm goin' out for my damn self
And everybody else can hang it up on the shelf
I'm bringin' this shit to a end
Motherfuck a family, to hell with a friend
And I hope you don't think cause I know ya
that I won't lay ya down and just blow ya
motherfuckin' ass straight to heaven
Then I reloads my .357
Bitch I got popped, so what I'ma do
but take them motherfuckers out on you?
I used to pack a gun for protection
But now I'm aggravated with no affection
And I don't give a fuck, so
if yo ass ain't down, then yo ass gots to go, hoe
And I guess I won't make it above
cause I was pushed to the point where it ain't no love"

In a sudden change of mood, the following "Ho" is a lewd and rude '90s update of Whodini's "I'm a Ho," while the Isleys-sampling "I Don't Luv Ya" makes their feelings about females (or rather lack thereof) known even more explicitly. Side A concludes with the Jamaican vibes of "Takin' No Bull," where Klas 1 challenges competitors with gunplay and even a little bit of battle rap as Boss triggers off some scratches from the O.G. Style record.

The "Re-Intro" strikes a militant pose towards everybody from Martin Luther King to "every redneck cracker in Pasadena, Texas," but 4 Deep is not really a political group, at least they don't deliver anything like that on side B. "Bring Yo Ass" features them (and an uncredited female guest) in their self-described 'aggravated' mode over a slowly rumbling rhythm section peppered with some Nite-Liters "Afro-Strut" funkiness, while "Up 2 No Good" is the obligatory jacking tale. Ironically, after a variety of crimes being committed in "Up 2 No Good," "What I Do?" complains about police harassment.

Attention may at this point turn towards the increasingly off-kilter, low-fi production. "What I Do?" consists of little more than an overdriven bassline and some drum clicks. "Rollin' 4 Deep" sounds like an obscure mid-'90s New York record, at least outside the few melodic flares. "U Got Play'd" laces the "Watermelon Man" break with sparse but slapping drums, "True Blue Brother" is a bluesy dirge with jazzy ornaments and a Jungle Brothers sample for a hook, and "Real" closes the proceedings with another helping of subdued soul.

"Another Day in the Jungle" was only the beginning for this unsung Houston crew who would travel even further into the muddy and murky side of blues, soul and funk with the following albums. Sensitive members of the audience may want to steer clear from it, but '90s gangsta rap aficionados should definitely make themselves familiar with 4 Deep.