:: Echo-Vista
** RapReviews "Back to the Lab" series **
as reviewed by Steve 'Flash' Juon 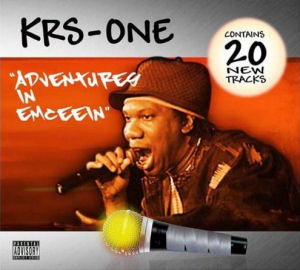 In the prolific catalogue of material that makes up KRS-One's hip-hop career, this album is something of an oddity, and not because of content. That's already been done - every time we all thought we understood Lawrence Krisna Parker he'd come along and do something like drop a gospel rap album. I sometimes believe Kris has a lot in common with that old adage of 'Rowdy' Roddy Piper's: "Just when you think you know all the answers, I CHANGE THE QUESTIONS." Well with this album there's no shortage of questions. Here's a short list:

* Who is Echo-Vista, and why haven't they done anything since this album?
* Why would Kris choose to compete with himself by releasing "Adventures In Emceein" and "Maximum Strength" at almost the same time in the same year?
* Who did the marketing and promotion - and why did they do such a lousy job of informing the public about this album?
* Was Kris trying to go old school by involving Chuck D, KRS-One and Rakim, or was he going new school with Cx, Pee-Doe and S-Five?
* What was the "Adventure" - where were we going and what was he hoping we'd reach at the end of the journey?

Unfortunately there are no good answers to ANY of these questions, which is why this album is such an oddity and such a frustration to review. Even with the most obscure of KRS-One albums you can usually figure out what's going on and why. The motives behind a digital only release like "Lyrical Ass Beating" were easy to figure out - Kris felt disrespected and wanted to serve notice to the hip-hop nation and all his fans that he still deserved his props after all these years. It was the kind of salvo he could quickly fire off and cheaply distribute. That's not the case here - it's a full length album with major guest stars - hip-hop superstars like Nas who appear on the song "The Real HipHop":

KRS: "To overstand hip-hop you gotta overstand hip-hoppers
Afrika Bambaataa, they made this man!
And yeah there were others, undocumented sisters and brothers
that fell to crimes and drugs, it was crazy man!
But the secret to +Edutainment+
is to take hip-hop beyond entertainment, leave baby land!"

Okay wait a minute - "Spit-tacular?" Was that the original name for this album? MORE QUESTIONS. Nas is not the only one to reference this name - Kris himself also refers to it on the track "The Teacha Returns":

"Spit-tacular, you spit at me, I spit it back at ya
I'm an emcee, not an actor
My lyrics won't trap ya, they'll free ya
But rappers still wanna test The Teacha, let 'em have it!
What you in my face for, in my space for?
This is what you rappers get smacked in your face for
Y'all talk about cutting the bass raw
But you draw the cops, this what you get chased for
I'm forever above your world in whatever you do
Rappers, I will level your crew
When I'm through, they won't even be able to TELL if it's you
I'm an emcee, this tradition goes back to Pebblee Poo"

Unfortunately I'm also left with another question - who produced these songs? I only have a digital copy (you can buy one yourself using the Amazon link at the top of the page) and the questionably reliable encyclopedias out there don't offer information that would fill in the blanks. The more I try to find out, the more suspect this whole album seems to be. If I did have a physical copy, I wouldn't be surprised if there was a single one-sided card stuck in it with no production notes, old school Rap-A-Lot Records style. Despite this multitude of problems there are some very good songs here, including the very political "Our Soldiers," clearly written at the height of the George Bush administration.

"I speak about more than crime
I rhyme to the spirit, to them people with +Spiritual Minds+
But I hope you get the lyric in time
You just went to get a degree, now you behind enemy lines
But yo, everything is gonna be fine
You'll be home in no time and you'll remember this rhyme
Most of them soldiers in Iraq my friends
I ain't checkin for the war, but I'm checkin for them
[...] Yo Bush, how you become President anyway?!"

There are plenty of interesting songs on "Adventures In Emceein." The soft symphonic sound of "What's Your Plan?" is the perfect backdrop for KRS-One to address the people who are failing to advance the agenda of hip-hop music and culture, and reminding everyone that they ARE hip-hop too. I was also surprised to find an "Over 30 Remix," but for not being the Marley Marl original I still found it to be a good take that Kris matched to well. Kris even goes hard rock with guitar playing from Vince Flores on "Wachanoabout" and name checks a lot of people important to history in the process:

Now I can't say I'm happy with all the unanswered questions left by "Adventures In Emceein," nor the fact that I deeply suspect KRS-One probably didn't recoup a dime from whoever Echo-Vista might be. (If he was handsomely paid and banked mad royalties though, I'd be pleased as punch.) However, for an album that seems to exist in a vacuum, it's got the rarified air of a KRS-One hip-hop album that doesn't exist for any other artist. He's doing what Kris seems to do more often than not - spit throught-provoking lyrics with an intense delivery only one of hip-hop's most veteran statesmen can achieve. Only the no-name artists who unnecessarily take away the spotlight from Kris hold this album down. No offense Pee-Doe, Cx, and S-Five but go get your own album and stop interfering with KRS-One's. There's no reason for fans of Kris to not own this - except that you'll probably never find it at any retail store anywhere.