:: Big Dada Records
** RapReviews "Back to the Lab" series **
as reviewed by Patrick Taylor 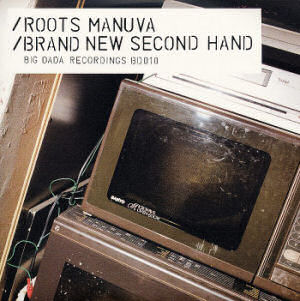 There are almost a million British Jamaicans living in the UK, many of whom either came over or are the children of people who came over in the 1950s when the UK encouraged Jamaican immigration to shore up their post-war labor shortage. Those immigrants brought their music with them, filling South London with bass booming out of sound systems. Roots Manuva was born Rodney Hylton Smith in South London, the son of a Jamaican Pentecostal preacher. He grew up surrounded by reggae music, and its influence has stayed with him.

Roots Manuva's flow combines elements of both hip-hop and reggae. His British accent has a faint Jamaican lilt, and his rapping contains some of melodic barking of a dancehall DJ. He also inherited some of his father's oratory skills, which come across in the self-confident righteousness of his rhymes. He spends some time on hedonism, but also gets into deeper subject matter. On "Juggle Tings Proper" he raps:

"Don't go callin me coon, you'll catch a boot to your jaw
We pro-black, freak that, can't sweep no floor
I heard those my people, them burst their backs
Work hard for eons and paid tax and have not seen jack
In return, how does shit burn
It could well make a guy lose sense and rationale
Onto kamikazes on shifting streets
It's eyeball for eyeball and teeth for teeth
While we spin on this ball of confusion
I sight no solution, cesspits just get more frowsy
Chemical rain got me drunken and drowsy
Rowdy, I got no choice but to be
The living example of a root-fi youth type soldier
Bowling through like there ain't no tomorrow
Brave them terrains of pain and deep sorrow
But still keep sliding on, I try to make sense of the madness
But it seems like I'm wasting my time, it's best I just
Go get me mine, find some inner peace
Climb to higher heights, embrace the light"

Reviews at the time of the album's release praised "Brand New Second Hand" for its conscious lyrics. While it is true that the lyrics are conscious, they don't come off like the same oasis of thoughtfulness in a desert of materialism and artificiality that they must have thirteen years ago. Not that there aren't just as many hip-hop songs about partying and bullshit in 2012 as there were in 1999, but there is also more counterprogramming available for those who like substance with their beats.

I listened to this album several times before began to hone in on what Roots Manuva was saying and not just how he was saying it. The man has a nice flow, and he could make the phone book sound interesting. His thick accent and liberal use of British and Jamaican slang didn't help in my Yankee comprehension of the lyrics, either. Roots Manuva also doesn't hit the listener over the head with the message, either. He weaves it into his rhymes in a way that is organic and unobtrusive.His guest spots are equally unobtrusive. Wildflower, Seanie T., Jodi, Richard Molyneaux, Isabelle Dunn and Stella Page all offer their rhymes and voices to the album. They provide some spice to Roots Manuva without overwhelming him.

Roots Manuva produced the bulk of the album himself. His beats are constructed around a skeletal beat and sparse keyboards. At times, like on "Cornmeal Dumplings," it is reminiscent of Kutmasta Kurt's work with Kool Keith. Elsewhere on the influences of reggae and electronic music come through more clearly. IG Culture produced and is featured on digital reggae track "Dem Phonies." Wayne Bennet's work on "Sinking Sands" sounds like something Mobb Deep would have rapped over in the late nineties. In fact, a lot of this album feels like the kind of stripped-down, back-to-basics hip-hop that East Coast purists were putting out in the 90s in an attempt to turn raps focus back to beats and rhymes and away from the more commercial direction it was going in at the time.

There is a blunted, sleepy vibe to "Brand New Second Hand." It is a late-night record, full of the quietness and introspection that tends to come at two in the morning. The album seems to exist more to set a mood rather than get a party started, and as a result it can feel monotonous at times. However, it's an album that I keep coming back to despite the fact that there aren't any songs that jump out, minus album closer "Motion 5000." It's pure hip-hop, pure and simple, with a Jamaican lilt and a British accent.