:: Def Jam/Columbia Records
** RapReviews "Back to the Lab" series **
as reviewed by Steve 'Flash' Juon 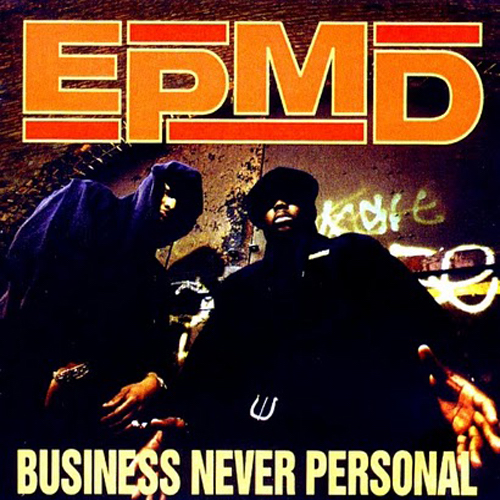 The irony of the album's title is not lost on anybody familiar with EPMD's history, but for those of you new to Erick and Parrish Making Dollars, things could not have gotten MORE personal. Even though past efforts like "Strictly Business" and "Business as Usual" were highly regarded hip-hop classics, that critical acclaim couldn't keep the group's private business from going public in a very negative way. Parrish Smith's home was robbed, Erick Sermon was named as a suspect, and when the tensions came to a head Sermon implied (without outright saying) Smith had it coming anyway because he had been pocketing all of their album proceeds and shortchanging Sermon's share. The group split up in a very public and acrimonious way after "Business Never Personal" dropped, which made it all the more surprising when they reunited for a new album five years later.

EPMD could never quite recapture the magic found on this CD after their reconciliation. There are some highlights and many lowlights to their post-1992 catalogue, but on "Business Never Personal" they were at the peak of their musical and lyrical prowess. The group's chemistry in the studio completely obscures whatever personal tensions existed behind the scenes, so in that respect at least they kept their business PROFESSIONAL when it came to recording this album. The results of their efforts was the most successful single of EPMD's career and a personal favorite song of mine. You can't help but chuckle just a little at the fact that a song bemoaning rappers who "Crossover" became their all-time biggest Billboard charting hit.

Smith: "The rap era's outta control, brothers sellin their soul
to go gold, going, going, gone, another rapper sold
(To who?) To pop and R&B, not the MD
I'm strictly hip-hop, I'll stick to Kid Capri
Funk mode, yeah kid, that's how the Squad rolls
I know your head is bobbin, cause the neck knows
(Not like other rappers) frontin on they fans, they ill
Tryin to chill, sayin 'Damn it'd be great to sell a mill'
That's when the mind switch, to the pop tip
("Kid you're gonna be large!!")
Yeah right, that's what the company kicks
Forget the black crowds, you're wack now
In a zoot suit; frontin black, lookin mad foul
I speak for the hardcore (rough, rugged and raw)
I'm outta here, catch me chillin on my next tour
From the U.S. to the white cliffs of Dover
Strictly underground funk, keep the crossover"

The group's musical clout was also at its peak in terms of the Hit Squad before their messy divorce, with proteges including Das EFX ("Cummin' at Cha") and Redman ("Head Banger") among artists who would continue to make an impact even after the group's dissolution. On a short list titled Best Posse Songs of All Time I have to personally rank "Head Banger" top ten minimum, but top five more realistically. The samples of Joe Tex' "Papa Was Too" and Parliament's "One of Those Funky Things" made the song live up to its title. I defy you to listen to "Head Banger" and NOT bob your head to the beat. Every rapper fires with both lyrical barrels on their respective verses but it's little wonder that Reggie Noble gets the final say on the track - you would NOT want to try to top his performance.

Redman: "SURPRISE NIGGAZ! The original P-Funk funks you up
I take a hit from a spliff then I get biz with the NEW CUT
Because I can +Jam+ like +Teddy+ if you let me
A Goodfella but still rugged like Joe PESCI
My style is mad funka-to-the-delic with the irrelevant
shit that I kick backflips any four bitch (yeah)
Deduct and I dip then I SWITCH
to an incredible nigga with a *nickle* nine on the hip
I always got played by a honeyDIP
But now I'm on the money TIP so now I call the honeydip honey BITCH
And swing hardcore because that's where I come from (yeah)
I +Rock+ ya like +Chubb+ and burn scrubs like a dum-dum
Remember Redman, last album I was +Hardcore+
Now I'm back to tear the frame out your assCRACK
Cause I get wreck, with the tec, with the blunt or Moet
And what you see is what you get and what you're gettin is your
ASS KICKED, nigga, hit you with the funkdafied figure
Like A plus funk, funk times stuffed in your back trunk PUNK
Yes the Redman that's what they call me
Wicked with the style you think I have cerebral palsy
Like AAIEEAHAAA, cause I freak the styles crazy
Lullaby your stupid ass, ROCKABYE BABY
The Funkadelic Devil hit your ass with a level from the new school
and still holdin my jewels!"

I still get a Kool-Aid smile every time I hear this song and it's almost 25 years old now. Even though this release is widely associated with its two chart topping singles, Erick and Parrish came out hot right from the start of "Business Never Personal" on "Boon Dox." Once again the sampling game and layering of said same was up to par as EPMD combined Earth Wind & Fire's "I Can Feel It In My Bones" with B.T. Express' "If It Don't Turn You On" (also used in the EPMD classic "So Wat Cha Sayin'") and Commodores "The Assembly Line" (also heard in Eric B. & Rakim's "Let the Rhythm Hit 'Em" and Kool G. Rap & DJ Polo's "Road to the Riches"). I honestly have to stop and marvel for just a second at the fact this was the FIRST song on the album. It's like hitting a home run on the first pitch at your first at bat in the first game of the season. BOOM. In a remarkably short 38 minutes (seriously this album goes by way too fast) EPMD unearths gem after gem, dropping them rapid fire on the populace. Even the songs I didn't fully appreciate as a youth have gotten better with age. The slow flowing "Chill" is just dripping with funk sauce, an electronic masterpiece that samples the same ESG "UFO" track on its hook as about a thousand other songs - yet still makes it sound more harrowing than most of them. "Scratch Bring It Back, Pt. 2" ought to be considered TWO different songs that are both dope and held together by nothing more than a studio conversation and a sample of KRS-One screaming "RE-WIIIIIIND!" DJ Scratch goes OFF on the tables and his final "forget it I'm constipated" scratch is the equivalent of a mic drop walk off. I'm not even going to explain the dopeness of "It's Going Down" at ALL. Just hit play and listen. As much as I love this album, more than I ever did as a kid, I can't rate it QUITE as high their first or third CD, though I'd have no problem ranking it above the second. "Who Killed Jane" is a good but not GREAT track in their ongoing "Jane" saga, and unintentionally feels like a final nail in the EPMD coffin given the break-up that followed. Parrish Smith's bars on "Can't Hear Nothing But the Music" are a little bit OFF in a way I've never been able to properly put my finger on, although Erick Sermon's bars on the second verse immediately make up for it ("Breaker one-nine, breaker one-nine, mayday/call for backup, it's Erick Sermon's payday.") I enjoy "Play the Next Man" but it feels like a dance/party track compared to the ruggedness of the rest of the album - not a BAD song just out of place. Nevertheless I can play this whole album start to finish without hitting skip once, and there probably isn't a single CD I've bought in 2016 I can say that about. If you don't own "Business Never Personal" you should.