:: Jive Records
** RapReviews "Back to the Lab" series **
as reviewed by Emanuel Wallace 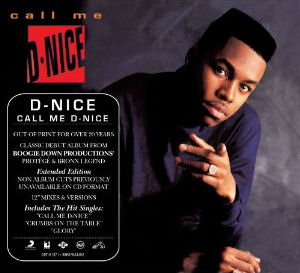 Boogie Down Productions was one of those collectives that seemed to have a core along with a cast of collaborating role players that appeared and disappeared during the group's tenure. Some of these collaborators would include Heather B, Mad Lion, Channel Live, Harmony and Ms. Melodie among others. Most would agree that at the center of BDP were Scott LaRock, KRS-ONE and D-Nice. As most know, LaRock was killed shortly after the release of "Criminal Minded," what some may not know is necessarily why. The story varies some depending on who you ask and where you look, but when I read Brian Coleman's "Check The Technique: Liner Notes for Hip-Hop Junkies" KRS-ONE recalled the incident stating that D-Nice was being targeted by some hood who had accused him of trying to talk to his girlfriend. Scott took D-Nice up to where the guy was staying in the Bronx River Houses and squashed the beef. Some people across the street started to shoot from a window, basically ambushing their Jeep and Scott was the only one hit. D-Nice called KRS to inform him of what was going on and he didn't believe it until D started cursing at him.

After BDP's "By All Means Necessary" and "Ghetto Music: The Blueprint of Hip-Hop," the multi-talented D-Nice decided to give it a go on his own with "Call Me D-Nice" in May of 1990, shortly before BDP's "Edutainment" would hit the streets. Powered by the timeless title track, the album peaked at #75 on the Billboard charts and showed the hip-hop community that he could thrive outside of the shadow of Boogie Down Productions. Things open up with the braggadocios "Crumbs On the Table" before going into the monstrous aforementioned title track:

"My name is D-Nice although I hate to admit it
Taking out you suckers and you don't know how I did it
See every episode remains in this mode
Very cool, very calm, there's no sweat in my palm
I just pick up the mic, proceed wit a song
I get right to the point, my competition's not long
Or short
It's like a sport hanging in the middle
But now if you're puzzled, let me kick the whole riddle
That my name is Derrick and if I didn't mention
D-Nice is just a description
It describes the kid on the mic
I'm the TR-808, huh, but just call me D-Nice"

Post "Criminal Minded," BDP's songs often had a social slant to them, so it's only right that D-Nice's album would do the same. Therefore, we get songs like "Glory" and to a lesser extent, "A Few Dollars More." The former touches on the service of African Americans in the military dating all the way back to the Civil War, while the latter tells the inner-city tale of a guy named Stan who decided to become a hitman to try and support his family. Another prominent aspect of many BDP recordings was a Jamaican patois. This can be heard in part on the Pee-Wee Herman sampling (hip-hop loved Pee-Wee in the 80s, ask Joe Ski Love) "Under Some Buddah" and "The TR-808 Is Coming" which samples Three Dog Night's rendition of "Mama Told Me (Not To Come)" and features KRS-ONE on the hook. D-Nice delivers the slow flow like so:

"I-I'm D-Nice the 808 it's no mistake
Now this is not the time but the music that I make
And wait, I'm telling you, why don't you just listen
Just because I come from the Bronx I'm not dissing or wishing
Cause the beat sounds groovy
I drink Amaretto on the rocks cause it cools me off
And usually when I am speaking
I usually wear a cap and gown when I'm teaching
Or reaching out, huh, to touch someone
I'm rocking on the microphone just to have fun
So run (Bo bo bo!) cause I'm number one
And if you want to battle me then pull out a gun
Don't forget the ammo-nition and listen
Don't ever bite a lyric cause then you're pissing me off
And with the style that I'm bringing
The girls love it, and of course, girls I'm swinging
And seeing (Bo bo bo!) I left the girls' hearts broken
Now I'm back to tell you all I'm not joking
And I'm hoping you see that I'm the main topic
You put me in the wildest crowd and I'm a rock it"

The battle rap "It's All About Me" is a formidable track for what it is, but not much else. The playful "Pimp of the Year" teaches us that even women with a chest full of hair can be attractive to someone. "It's Over" has a new jack swing vibe to it and finds the TR-808 reflecting on a relationship that was once sweet but has since gone sour. The album closes out with "And You Don't Stop" which gives shoutouts to several members of the BDP posse and other east coast acts of the era.

Twenty-two years after its release and the jams that were jams back then still jam today. A follow up, "To Tha Rescue" was released, but it really didn't do anything by comparison. In 1990, who really would have thought that D-Nice could possibly have more visibility than KRS-ONE? Nowadays D-Nice is more famous for his photography work and he's actually one of my inspirations (aside from the legendary Gordon Parks and Jonathan Mannion). If you dare to go to my MySpace page which is still active for some reason, my last status update says "Takin out you suckas, and you don't know how he did it." That was posted on July 28, 2007. D-Nice is also an official Roc Nation DJ and you can find him rocking parties from Maine to Spain for brands like Hennessy and Heineken among others. Many may try to place Derrick Jones in that dreaded category of being a one-hit wonder, and to the standards of some that may be true. However, I'll say this, he's taken that one hit and made it the catalyst of a multitude of career paths. The TR-808 hit the scene in the mid-80s and it seems that they haven't been able to unplug him ever since.