Chubb Rock :: The One

:: Select Records
** RapReviews "Back to the Lab" series **
as reviewed by Steve 'Flash' Juon 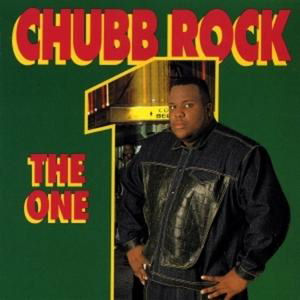 "{Come on y'all, let's go to work!}
The Chubbster, a man that came out about 1986
with the help of Dr. Ice in the mix
And even then, kickin lyrics that was quite potent
Howie by my side, with his pesticide for the rodents
I'd flow"

And flow he did. As recently as 2009, the venerable hip-hop artist could be heard "Bridging the Gap" between the Golden Era of rap and the Now Generation, but before then you could have been forgiven for asking "Whatever happened to Chubb Rock?" In fact you could even been forgiven for asking "Who IS Chubb Rock?" In a culture that celebrates its pioneers and prominent recording artists, the quiet and humble Chubb Rock is often overlooked, simply because he's not out there asking for it. He certainly deserves it though. Born in Kingston, Jamaica but Brooklyn by trade, the large in charge rapper who described himself as "6 foot 3, 260 and change" was collaborating with hip-hop producer and first cousin Hitman Howie Tee throughout the late 1980's on hits like "Ya Bad Chubbs" that were favorites anywhere hip-hop could be heard on radio or basic cable. It was 1991's "The One" though that really broke him out in a big way. "The Chubbster" showcased his nimble tongue, passionate flow, and ability to promote a positive mindset without coming off as cornball.

"In ninety-one you will find me just
chillin countin shillings livin it up is a must
A Benz is not needed to portray my wealth
A Jaguar is not a symbol for a star
but Nelson Mandela, is a fellow I consider to be true blue
Long live the ANC, Walter Sisulu
The rest of the people involved, the problem isn't solved yet
but you can bet...
that united we stand, divided it's over
Without us, this planet will begin to nova
and get cold, dark and scary like Pluto
And then who do you call? You know
The Chubbster"

Though it's less and less common for one producer to create an entire album for a rap star these days, there's no doubt that Chubb Rock only needed one FOR "The One." Much like his heavyset cousin, Howie Tee's contributions to hip-hop are often overlooked or disregarded, but his catalogue of work for Select Records defined not only that label but a whole generation of hip-hop. "Treat Em Right" bridged the gap between boom bap and new jack beautifully. An uptempo booming bass background met with swing, married it, and produced a top ten hit as its offspring. Despite his skill to ill on the mic and a stature that few sensible people would mess with, his skillful rap lyrics were tinged with a sense of humility almost out of proportion to the star he was.

"I'm a man that was born to have a mic on
Next to me at all times; ready to kick a rhyme
That will keep me out of financial bind
That's why when it comes to fans I'm never mean
Kids on St. James between Gates and Greene
Always say hello, cause I'm a modest fellow
Never try to play a superstar that's hollow
Cause if these kids don't go buy our records
We'll be has-beens - and plus naked
So we owe them, to pull out your pen
Sign an autograph; you might make a new friend
So just get your boys and bring the noise and just swing it
And party people in the house, sing it"

The pulsating beat and "leave the guns and have fun, out" message pulled party people out onto the dancefloor. After a long synthesizer breakdown, you almost think the song is over, then all of a sudden Chubb crashes through your wall Kool-Aid style with one more dope verse that ends with "just treat me right, peace."

The crossover singles might have you thinking Chubb Rock was a slightly harder version of Heavy D, and to be sure their penchant for Jamaican patois ("Back up move, you're dealin with a rudebwoy/Raggamuffin with a funky somp'in") and plus sized clothes made the comparisons easy. The similarities end there. While Heavy D endured criticism that he had gone pop and left hip-hop, the deep voiced and politically minded Chubb Rock avoided such scrutiny. Talking about the Gulf War was considered a political landmine, especially given the gung-ho jingoistic patriotism of the day, but Chubb found a sensible balance between viewpoints by emphasizing the theme "Bring 'Em Home Safely" with guests like Red Hot Lover Tone and 3rd Bass. Instead of protesting the war outright, he simply asked that the brave men and women putting their lives on the line were brought back in one piece.

"Destruction a product to develop and enhance
presidential fees, blood from overseas
spilled, uphill, peace of mind
I'm, waiting for, waiting for the time
Inner soul craves, for guidance
for safety for the brave, P.O.W. slaves
will be used as shields to pierce and drill
to drip tears, when the declared won't mingle
with the Man Upstairs, funerals for fear
Confusion, nervous hands from a scared wife knittin
Siblings infants weepin, continous tear drippin
Impaled men please God let them cease
Come home, Red Hot Lover Tone, Rockin Robin
MC Serch, and for the last the verse
let us rehearse, exclude men in the hearse
Everybody what's the verse? Peace"

And his message about the inner city was just as poignant on the echoing and funky "The Night Scene." If you mistook Chubbs as a PG rapper, this song alone would have warrented a parental advisory sticker. Chubb was a potent observer of the street life in Brooklyn, and detailed the worst of it in all of its inglory. I use the latter word purposefully, because so many rappers in the day were accused of glorifying the criminal lifestyle, but Chubb Rock is clearly not.

"The night time is an ill time cause nuff crime
happens that never gets aired on the prime
TV stations, public relations
gives the okay for what gets aired in the nation
You got the whole world lookin at "I Love Lucy"
Talented bitches on the corner sellin pussy
A variety'll give your friend for a 10 spot..
.. Christians doin rimshots!
Do more heads than barbershops will
Open their legs to the public for a meal
Damn it's a shame, the shit looks unreal
College graduates sometime kneel
Check out the crack scene over there
Those two motherfuckers gonna make about a million this year
Sell to their friends for a Benz
Kill their race for a taste
for what they call or see as being the good life
Gold nuggets, lots of ducats
Beeper number 1-800-Asshole
Sellin stone so we can see your bones
cause most crackheads don't have fat legs
Skull all soft, it can crack like eggs
You fiend for the flavor, steal for the hit
Grandma's walkin home, so you bust her shit
Send her to the hospital - for twenty bucks
Beam for a half an hour - that's fucked"

Mistakes on this album are few and far between, and even those few are debateable. I'm not particularly enamored with the song "Cat," even though I understand Chubbs felt the need to have at least one song expressing his love of nubian queens. The sentiment is on point, hearing him sing on the chorus less so. It really suffers in comparison to the hard hitting "Just the Two of Us," which is NOT an ode to women, but expressed a much deeper brotherly love for his friend and comrade Howie Tee. The bond between them was undeniable magic, like DJ Premier to Guru and Pete Rock to CL Smooth. There's nothing ostensibly bad about "The Five Deadly Venoms," except of course for the fact none of them feel that potent compared to Chubb Rock. Only Rob Swinga can come close.

It is perhaps telling that I look at my personal copy of "The One" and note that on the front are two price stickers I never bothered to remove - one says "$6.98" and another says "clearance $3.00" and both are dated 1999. It only made sense for me to upgrade from my cassette tape for less than what a value meal costs, but it also shows the short shelf life Chubb Rock had in the mainstream and how quickly his star faded. That's his own doing in part as he went a full five years between albums in the 1990's, and though he had perfectly good reasons for it that was too long for a rapidly changing hip-hop landscape. He did a few things here and there - Return of the Crooklyn Dodgers and one song on the America Is Dying Slowly compilation, but it wasn't enough to keep him in the public consciousness. This album review may not be either, but at least it can celebrate a classic that like fine wine has only gotten better over the last 20+ years.