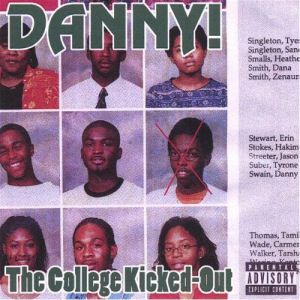 If you don't know who Danny! (aka Danny Swain) is by now, this is a good place to start. Back in 2004, Danny! gave the world his overlooked debut LP, "The College Kicked-Out." And yes, that is the same year another rapper debuted his college-themed album, but I'll do my best to not use said rapper's name in this review because lord knows the comparisons have been run into the ground. "College Kicked-Out" is the first setback of Swain's rap career of extensive series of unfortunate events. Sadly, Danny! is still a relatively unknown rapper who hails from Columbia, SC, as opposed to that other rapper who is one of today's most celebrated figures, whose luck just happened to be a little bit better than Danny!'s.

While Danny! has certainly upped his game in essentially every aspect (production, flow, lyrics, storytelling, etc.) since dropping "Kicked-Out" eight years ago, it is still one of his most endearing albums in his fairly extensive catalog. For new fans who just got put on to Danny! from co-signs from ?uestlove and Jay-Z, everything you really need to know about Mr. Swain is in the first verse of the "Intro" track:

"I used to be well-loved
But now I'm only half-liked
Friends and family keep callin' me an ass-wipe
So I grabbed a knife and stuck it in my back twice
I'm just saving 'em the trouble I hate to bust your bubble
but I'm back to bomb your crew
Produce my own beats, and I'm rappin' on 'em too
A lot of things have changed since last year
The rings, the cashmere
Fuck the middleman, you can bring the cash here
And I'm glad they expelled my ass
Wise Decisions 101, yeah I failed the class
I know these haters wanna dwell on my past
But I'm in a new zone; in fact I'm here to take over rap
I'm just here to put some clothes on my back
While y'all all look pissed
Like I was over that Waldenbooks shit
Call it quits unless you wanna be a foster kid
Have your ass skippin' town like Austin did, muthafucka"

Danny! spits his raw and continuously candid lyrics over his self-produced, lo-fi soul beats. And yes this production style was HUGE back in '04, which is what makes "Kicked-Out" so tragic. Somehow in the world of budding beatsmiths like 9th Wonder and countless others who heavily relied on the "chipmunk" sound, Danny! still managed to get overlooked. Tracks like "Movin' Out" and "Second Time Around" no doubt could've been rapped over by just about anyone in the Roc-a-Fella camp circa 2004.

What makes Swain so compelling on "College Kicked-Out" is very big personality. He has one of the best sense of humors in hip hop (if you haven't heard any of his prank calls to celebrities yet, do that right now), and tracks like "I Need a Publicist" and "D.A.N.N.Y." are definitely precursors to the style that heavily makes up his "Where Is Danny?" album. In the same breath, he also manages to touch on extremely personal topics including getting kicked out of school ("Clap Back"), his relationship with his mother ("Can't Nobody"), and his struggles as a rapper ("No Guarantees").

"Ain't nothin' worse than lookin' up at a (dead-eyed crowd)
And if I jumped into the audience, I bet I'd drown
'Cause I'm about one song, maybe two or three
Maybe four songs away from the crowd booing me
Feel like a failure when the crowd gets shady
Man this shit'll drive you (crazy)
I'm a product of the eighties
So I sit in my Mercedes, after a show
Then I cry like a baby but don't let nobody know"

Swain definitely has come a long way since 2004, but it's fun to look back and see his progression. This is certainly not his best record, and has its flaws (most notably "My Baby"), but his hunger and vision in his early work is definitely show what kind of person Danny! is. The kind that can overcome setback after setback, and eventually doubters and haters will get "Payback."