:: No Cure Records
** RapReviews "Back to the Lab" series **
as reviewed by Grant Jones 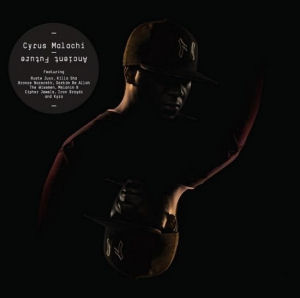 The British hip hop scene is overloaded with technically gifted emcees, from Split Prophets to Rhyme Asylum, there are plenty of examples of rappers rapping about how great they are at rapping. There are also a lot of British rappers who rhyme about real shit, what I like to call ‘Reality Rap'. Verb T, Sonnyjim and Micall Parknsun have all excelled at bringing life to the most mundane affair, through their superior use of humour, character and thumping choice of production. Unfortunately the scene has divided in to two distinct sub-genres of late; those that embrace the essence of boom-bap beats and a message (the aforementioned artists) and those that rhyme over glossier productions, usually accompanied by singing (Tinie Tempah, Professor Green, Devlin). Whilst the two styles rarely transcend each other, one rapper that had the potential to meet a wider audience WITHOUT altering his style of production was Klashnekoff. There have been success stories since Klashnekoff, such as political rapper Lowkey, but not since "The Sagas of…" has an artist brought a raw intensity, heartfelt message and disregard for what's popular, so emotionally. Klashnekoff had a lot of buzz about him ten years ago, and I remember hearing one of his songs on DJ Premier's radio show which is very rare. After a long hiatus, Klashnekoff came back a few years ago to a muted response. So who's the next big rapper in British hip hop? This review is my argument for Cyrus Malachi. Check this shit out:

A deep, booming presence with a thick London accent, Cyrus Malachi not only dominates every collaboration he's appeared on, but fills each verse with an incredibly varied vocabulary not heard since Canibus. He could be referred to as the British Canibus, but Cyrus doesn't overdo the scientific references, instead using the art of metaphor mixed with the ‘Reality Rap' we all know and love. "The Isis Papers" was a dope mixtape Cyrus put out shortly before "Ancient Future", but before that Cyrus was involved in the underrated "Anathema" project in the group Triple Darkness, who I believe are working on their next album. But for now, let's revisit "Ancient Future" from 2011, a mostly excellent journey through sour plots in tower blocks. Gloom and depression rear their ugly heads on "Dark Skies", a vivid combination of Cyrus' authoritative analysis of what many inner city neighbourhoods are like in London. Melanin' 9 drops a deft verse that demonstrates his superior ability to ride a beat. It's easy to see why they make such an effective pairing, as Melanin 9 is a more natural, flowing emcee, whilst Cyrus makes use of his powerful voice to jab you in the ear with pieces of knowledge. Knowledge is certainly something that Cyrus has, and he demonstrates it with various references to historical text. Whilst some rappers stick to the mythical and supernatural, it's a relief to hear Cyrus combine his style with regular themes. "Black Madonna" is a refreshing reflection on the young black ladies of today influenced by role models such as Beyonce and Rihanna, modifying their bodies because of unrealistic ideals:

"When she was young she was teased and called names
Painful memories play back in her brain, delicately placed
Tears run down her heavenly, ebony face
As she remembers, how the kids would make fun of her hair
Since sixteen she's been straightening it, now it's almost beyond repair
All her favourite actresses and singers are all fair
Light skinned, she feels like she can't compare
She wants to look like the girls in the magazines
So she switched the way she dressed
Started showing more booty and breast
Hoping brothers would show her more interest
Instead she got used like a sket…"

There is a distinct Wu-Tang influence running throughout "Ancient Future", and the appearance of American emcees such as Bronze Nazareth, Kevlaar 7 and Ruste Juxx should help ease any American listener in that may be turned off at the thought of a thick British accent. Speaking of Juxx, he destroys "King Cobras", a brutal Endemic production full of screams, horns and the hardest drums I've heard since Endemic's own EP with Cappo. Cyrus holds his own, but the track outstays its welcome after three minutes. The superior collaborative effort is "Bulldozers", another Ruste Juxx infused head-nodder. Killa Sha adds authenticity to the New York sound running throughout the middle of the album, before Cyrus Malachi stomps all over the track:

"Since the Isis Papers I've been shining like paint gloss
No more cameos, just straight face shots
I'll stomp you out until your brain clots
I was cut from a blood-stained cloth like the Shroud of Turin
Hunt you like a thousand bloodhounds from Berlin
Bars are like 100% proof alcohol dousing your skin
Followed by two blowtorches compounded to sin
He wants to act like he's a brick wall, I'm a mountain to him
Add a Chelsea Smile to his Calvin Grin
Open you up like an envelope
Scatter your organs like archipelagos
Spread your chick like a centrefold
Because she's penger than a scented rose"

The album isn't flawless however, let down by some poor production; in particular "Streets of Sodom" which has an annoying buzzing sample that sounds like a rave hosted inside a bee-hive. "Elemental" is an eery, Wu-knock off with Cyrus rhyming about nothing in particular. The tribe-like humming effect overpowers Cyrus, which takes some doing but is due to the lower key delivery. "Brave New World" is too minimalist for its own good, feeling more like an extended interlude than a true song. Lyrically, Cyrus visits a hellish future that's a "physical prison", the culmination of current government activity and terrorism. I know this style of hip hop isn't traditionally easy on the ear, but it could have used something more accessible to get the neck moving. The rest of the album however, is absolute fire. Lead single "Native Son" has a hypnotic harp-like quality to it, as Cyrus deliberates over whether slavery ever really left Britain. The video also pays homage to Mobb Deep's "Shook Ones Part 2" by keeping things simple:

"Slang Blades" is a demonstration of two excellent rappers doing what they do best. Kyza is consistently impressive every time I hear him, and although both emcees don't really say much, the track is a throwback to the days of Red and Meth, and you can tell they both had fun trying to out-rhyme each other. "Animal Circus" is a summary of Cyrus' progression through listening to "Wu-Tang Forever" and Tupac then discovering the British scene was producing its own classics by Jehst and Lewis Parker. I always find it fascinating when a rapper comments on other artists' work. "Ancient Future" reaches new heights on "Duality" which has Cyrus at his mature best, serenading his prospective wife with some inspirational rhymes any fan of rap can appreciate:

"Knowledge gives birth to wisdom
From my earth I search the Solar System
She helps me rise above the woes of livin'
Even if the hood is colder than a polar vision
Ponder my poem's precision
She gives me soulful provisions that keep me nourished
In turn I help her crops flourish
I still give her butterflies in her stomach
Her skin's softer than the golden granules of Saharan sand dunes
As we intertwine and harmonise
She helps me revitalise, like botanical extracts
We're having sex that, will make the average couple step back
And want to get that!"

"Black Maria" is an eye-wateringly detailed account of being sentenced to a spell in prison. Combined with a throwback production from Anatomy, Cyrus puts in his most emotive performance that is enhanced by his lyricism and dramatic use of vocabulary. But Cyrus doesn't slow down, sharing a tale of fatherhood that anybody who has a young child can relate to (as a recent father myself, I found this track particularly moving). It's songs like "Kemetic Love" that separate Cyrus from any other British emcee, his creativity and "way with words" is on another level. Bolstered by a delightful piano sample and hench kicks, the album definitely peaks in the latter half. "Concrete Flowers" is a nostalgic trip through an adolescence spent in an urban habitat, with mentions of school delinquency, financial hardship and appreciation of the simple things. "Crimson" pushes education over gangster lifestyles, with an addictive beat reminiscent of a Mobb Deep production on their classic "The Infamous".

Production-wise, "Ancient Future" revels in its throwback sound, boasting UK heavyweights such as Beat Butcha, Endemic, Jon Phonics and Anatomy. At twenty tracks deep, "Ancient Future" is too long to register as a true classic, but is full of creativity, passion and an unabashed approach to say something interesting. Family, crime, love, hate, politics, history, it's all here. Minus the few tracks that are too monotonous to register a second listen, Cyrus Malachi has shown incredible versatility for somebody who embodies that dark New York-era sound of yesteryear. Whether Cyrus will ever have a hit like Klashnekoff is debatable, but hearing Cyrus talk about being influenced by Klashnekoff on "Animal Circus" makes you wonder just how good the rappers of the future will be that listen to this, and decide to pick up the mic.