:: Death Row/Interscope
** RapReviews "Back to the Lab" series **
as reviewed by Pete T. 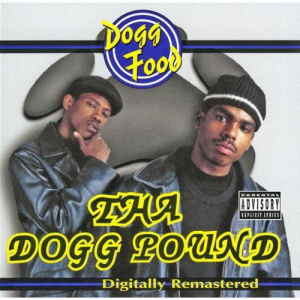 Tha Dogg Pound's heavily-anticipated debut "Dogg Food" was scheduled for a July 1995 release, but a shareholder protest by Death Row's distributor resulted in organizational restructuring and delayed the street date a full three months. As only the fifth project to emerge from Death Row (following the aforementioned "The Chronic," "Doggystyle," and the "Above the Rim" and "Murder Was the Case" soundtracks), it moved nearly 300,000 units in its first week on shelves and shot to the number one spot on the Billboard charts. An ideal combination of attention garnered by the shareholder protest and the acclaim of its predecessors no doubt led to its initial success, but listeners soon found that the controversy may have been somewhat misdirected—while similar in content and style to the label's earlier output, "Dogg Food" was hardly more violent or vulgar than its forerunners and even tame compared to some of the other Death Row records.

With nearly three dozen releases between them, millions of albums sold, untold label drama and even in-house beef, Daz Dillinger and Kurupt have led two of the most turbulent careers in rap history, but they started out a pair of deft if humble rappers from Long Beach who had the good fortune of appearing on both "The Chronic" and "Doggystyle." As Tha Dogg Pound, they worked with Death Row's successful musical blueprint established by Dr. Dre and engineered it to great results. "Dogg Food" is seventeen tracks deep of posse cuts, W-Balls interludes, West Coast anthems and good old gangsta rap.

Tha Dogg Pound's sound is reminiscent of Dre's—the deep, rumbling bass, soul sampling, cheap, whiny synthesizers, frequent guest appearances, and shrieking vocals from female R&B singers Michel'le and Nancy Fletcher—but it's the differences that make their sound most appealing. Even at a young age, Daz Dillinger was a phenomenal producer in his own right, and one who molded the label and the larger West Coast's signature sound in the years that followed. His tracks tend to be bouncier and generally sunnier than Dre's, embodying a trademark gangsta-boogie flavor that he would expand upon for the next decade, and his rigid, funky drum patterns and sparkly piano keys are also quite distinctive. On the mic, he sports an impenetrable delivery and commanding presence, especially next to his more technical and lyrical counterpart. The young Kurupt is a slick gangster capable of bending syllables into complex rhyme schemes like a seasoned pro with a nimble, versatile flow, tongue-in-cheek sense of humor, and sheen that would lead to his becoming one of California's most celebrated MCs by the late '90s.

Despite a long running time and somewhat top-heavy tracklist, "Dogg Food" is a landmark LP and a frequently brilliant piece of music. Few records offer such a vivid mood or are as distinct a listening experience as "Dogg Food," with its focused sound, longwinded instrumentals, hilarious skits that cleverly enhance the atmosphere, and long list of guests consisting almost completely of Long Beach rappers and affiliates that makes it feel like a block party or family reunion. With appearances from Snoop Dogg, Nate Dogg, Tray Deee, Lady of Rage, Big Pimpin' Delemond, Mr. Malik, Big C Style, and Val Young with additional production by DJ Pooh and Soopafly, "Dogg Food" establishes the precedent for the DPGC brand that would dominate West Coast rap into the new millennium.

Perhaps what's most impressive about "Dogg Food" is how well the duo's various talents come together. From the opener "Dogg Pound Gangstaz," Daz and Kurupt make clear that equal priority is granted to the impeccable production and profound raps, resulting in an unusually balanced and complete product. The thick, contagious funk of "Respect" is accentuated by menacing, flawlessly arranged rhymes from the pair, who display exemplary chemistry, chiming into each other's verses between the ragga toasts of Prince Ital Joe. Snoop appears on the consecutive DJ Pooh productions, both iconic tracks among the group's finest. "New York, New York" features three rich verses of Kurupt's posturing the likes of which fans wish he'd produce today, and while his rap makes no mention of the five boroughs, the song was perceived as a subtle attack at the East Coast for Snoop's infamous chorus. "Smooth" is a slow, speaker-pounding West Coast banger with a classic outro, but it's Young Gotti's marathon verse that's the showstopper, not too conceptual but numbingly complex nonetheless:

"...vandalize, I reprimand MCs to freeze
You can guarantee the temperature decrease degrees
Frozen stiff, 'cause what I'm holdin' lifts the soul
This mental automatic weapon keeps me in control
Never fold, I scald like water in order
To let these MCs know I slaughter so time's gettin' shorter
It sort of limits ya, but to me the sky's the limit
No, I diminish ya to dust takes sinister
Bust one rhyme, it's like a voodoo hex
Connect complex styles, my vast high tech flex
'Cause when there's an MC like me who's in there like swimwear
Don't despite me 'cause a lot of hoes like me mashin' them Nikes
I done seen niggas on TV dissin' the ga-deels
Now I got one question nigga, how does it feel
Check your game, but I ain't even saying no name
Proclaimed lyricists dissin' us for fortune and fame
Did I do something to ya, did we serve your hoes
'Cause you're on TV rapping like ya knew me, ya know me
But you don't really know me
That muthafuckin' nigga from the D-P-G
The K-U-R-U-P-T, I'm too smooth"

Performances such as these provide ammo for those who maintained that Daz and Kurupt were among the left coast's most vicious MCs in the '90s, and the timid thump of tracks such as "Cyco-Lic-No (Bitch Azz Niggaz)" and "Do What I Feel" certainly help substantiate these claims. Along with the warm Cali funk of "Do What I Feel" and "Ridin', Slipin' and Slidin'," a smooth narrative, and the trademark lewdness of "If We All..." and "Some Bomb Azz...," DPG manages to display more style over seventy-one minutes than most rappers do in a career.

The classic single "Let's Play House" remains the duo's most irresistible song to date. Daz's production and Michel'le and Nate Dogg's vocals bring to mind a rich, full-bodied soul jam from the seventies, but the rappers' humorously sexualized lyrics give it the feeling of a playful, good-natured parody:

Daz: "I'm in the shack bout to blaze up a sack
Yeah we grown, all alone, posted up in the back
There's no mistakin', I can have the whole house shakin'
Young Daz in that ass baby doll, no fakin'
Don't get me wrong, tell me what's the flavor of the song
You know it's Daz in your drawers when ya momma ain't home
Ring the alarm, I got ya buzzed, lovin' me
Physically and mentally, I knew that it was never meant to be"

Kurupt: "I know you know this girl by the name of Danielle
Body of a goddess face from hell
But oh shhh...this wasn't the average trick
(She got the bomb) and she like gobblin' and swallowin'
A whole nine-and-a-half on that black ass
Groupie, now all the hoochies wanna do me from the past
To the present (Say what?) let me rep and present
(Who?) the biggest nigga hittin' all the hoes in your clique
Fast as lightnin', runnin' through like the breeze
In the summertime out on the corners makin' G's
It's the thirst, but I can show ya somethin' much worse
Than the thirst, if worse came to worse, but first thing's first
Brenda, I can remember, how hot y'all be gettin'
Eighty-seven, eighty-six, and, yeah, the year a young man grows
Some women become ladies, some turn into hoes
Young hoes grown, find a way to stay wit' me
In the cut wit' Kurupt, come and play with me"

While the tracklist does lose steam toward the end, "Reality" and "Sooo Much Style" are deep highlights, and Nate Dogg returns for the glorious "I Don't Like to Dream About Gettin' Paid," featuring some of Dillinger's musical best. Building from a simple drum pattern, the song gradually becomes an upbeat masterpiece through its woozy synth, bouncy bassline, piano chimes, and shiny percussion. Daz spins a tale of a rise and fall from wealth attained through hustlin':

"Workin' L.A., just tryin' to get paid the right way
But somehow the right way don't pay
I'm comin' home late every night, gotta struggle and fight
With the baseheads on the late night hype
Tryin' to creep in the house through the cut (For what?)
So I won't be seen by none of the homies, but
The homey Nate Dogg spots me, and say 'Yo what's happenin'
Oh, you don't know me no more when ya pass me the satin'
I said, 'Aw, naw, it ain't like that G
I'm trying to go straight and have a J-O-B'
'You need to quit that faggot-ass job,' that's what he said
Showed me his grip and took some satin to the head
Damn that nigga had at least two G's
And he was clockin' it with so much ease
I told him I was gone so I'm headin' in the house
Everybody knocked out, so I'm locked out
I go back to the front where my homies is hangin' at
They offer me a cavy sack so I can start slangin' that
They say, 'You ain't a hustler,' I say 'Don't doubt it
Hold that thought and I'll think about it'"

It's probably true that "Dogg Food" could not have existed without "The Chronic" and "Doggystyle," a reason that Daz and Kurupt never became the icons that Dre and Snoop did, but "Dogg Food" is a landmark album on its own. It is a brilliant exercise in style—Kurupt's smooth flow and sly humor, Daz's thumping production—and their appeal is much more subtle than their mentors'. Showcasing the best of the duo, their label, their city, and their coast in the great year of '95, "Dogg Food" is an essential debut from two can't-miss talents with splendid production, excellent rapping, classic singles, and a whole lot of fun.