:: Atlantic Records
** RapReviews "Back to the Lab" series **
as reviewed by Steve 'Flash' Juon

Friends often come calling for old obscure rap albums they're sure that only I your humble author would own. More often than not they've picked the right man for the job, because not too many people these days have albums by the likes of Twin Hype, Miilkbone and Dream Warriors. It's not that every rap record, tape or CD I bought over the last 25 years is a gem - in fact I own some downright awful shit - it's just that having such a large collection comes in handy when you run two websites that are repositories of hip-hop history. Nobody is more surprised than me when someone asks me about an album and it turns out I don't have it, so when my good friend Semp asked I had anything by Doug Lazy I had to pause for a second to think.

Semp was even more specific though - he didn't just want one of the Doug Lazy singles I could remember like "Let the Rhythm Pump." He wanted the ALBUM. He wanted to borrow "Doug Lazy Gettin' Crazy." Now I was sure. I might have a single or two, maybe a mixtape with some of his shit on it, but without even looking I knew I didn't have "Doug Lazy Gettin' Crazy" in my library. To be perfectly honest I had no idea Doug Lazy HAD released an album. I thought he was just one of those hip-house dudes who put out club hits one twelve inch record at a time that didn't worry about full-length albums. While Amazon sellers were asking ridiculous prices for this album (one wanted almost $90 for "like new") I found a friendly eBay seller who had a "good condition" CD for well under $10. In fact when the CD arrived in the mail I could have sworn it had just been taken out of the shrinkwrap before it was mailed - it looked pristine and unplayed. Maybe that's not such a good thing though - maybe nobody wanted to hear it. Time to review "Doug Lazy Gettin' Crazy" to see if this is an album worth fondly remembering or if my friend Semp is the crazy one! 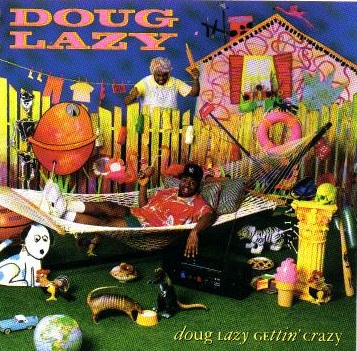 The liner notes for this disc aren't complicated. "All songs written by Doug Lazy. Producer: Doug Lazy. Executive Producer: Vaughan Mason. Mixed By: Doug Lazy/Vaughan Mason." That takes care of that. Incidentally the artwork on the front cover looks like a garage sale full of paint cans exploded everywhere, and just to live up to his name Lazy appears to be laying in a hammock sipping a mixed drink while his "wife" prepares to beat that ass with a rolling pin. People who say No Limit album covers were cornball have nothing on Doug Lazy. The album opens with a skit of Lazy being woken up from a nap to record "Can't Hold Back (U No)."

"I got somethin here, so here's somethin
For your speaker yo cause it's pumpin
Plain and simple; but not simple and plain
Yo it's Doug, Lazy, here to explain
Once again, an L-A-Z-Y reply
On the microphone, I
Get into it, and give all that I got
Regardless, of if you want it or not
You got to get it, get with it
And let me go crazy, when I hit it
Now it's time to get Lazy
Cause with this jam there's so many ways we
can get hyped on a serious level
This is the first verse and I got several"

The track here is just fine - better than average for a nearly 20 year old rap album. Lazy provides an uptempo swing with a fine electronic bassline, solid drums and horny horns that stab through the mix to make the beat kick. The beats are even better on "Ahh Get It," a song that is reminiscent of C&C Music Factory's "Here We Go (Let's Rock & Roll)" for all the right reasons. Unfortunately the raps Lazy provides with his beats do not improve one bit. "I get paid, like Trump does/And when I'm finished, you know that the bass was/legit, so get up and get widdit/(GET INVOLVED!) Yo get it, get it." Now don't get me wrong, there are far worse rappers in the industry TODAY than Doug Lazy was back in 1990, yet Lazy's simplistic rhyme scheme and minimal number of syllables spit won't win him any prizes. Let's put it this way - anybody who ever knocked Pete Rock for the occasional rhyme he dropped would consider him a vastly superior MC after a taste of Doug Lazy.

Since it's clear Doug Lazy's chief strength is in his production, let's give credit to the man where it's due. I was never a very big advocate of hip-house (which thinking about it is probably why I never owned this album until now) but if you'd want one man to represent the genre musically Doug Lazy might be it. "Let the Rhythm Pump" is where Lazy actually drop his best rap simply explaining his production technique - he took a bunch of crazy samples and added a house music kick to it. He acts like it's simple but I doubt any amateur let alone most professionals could do it this well. When he notes braggadocious rap was the element missing from house music, I can almost agree. ALMOST. House, Hip-Hop, R&B, Jungle - they're all from the same family tree, but I think the branches diverge for a reason. The tracks here would be good house songs with or without Doug's rap, and with no offense to Mr. Lazy, they might be BETTER in some cases. Either way songs like "Let it Roll" and "H.O.U.S.E." would still tear up a dancefloor today.

I understand now why Semp was nostalgic for "Doug Lazy Gettin' Crazy" - these beats make you want to get up and party down. That makes rating this album a bit tricky. From a purely rap-driven point of view it's not that great, and from a house music point of view one might want more singers and less rapping. Not every attempt at fusing rap with other similar (or radically different genres) has turned out good but if I had to pick a hip-house album to recommend "Doug Lazy Gettin' Crazy" might be one of the finer examples available. He's no lyrical kingpin but it may be for the better that way given his rhymes don't really distract you from the house music beats. Don't pay $99 for this one but if you see it in a bargain bin for 99 cents you won't regret it.