:: Altered Ego
** RapReviews "Back to the Lab" series **
as reviewed by Grant Jones 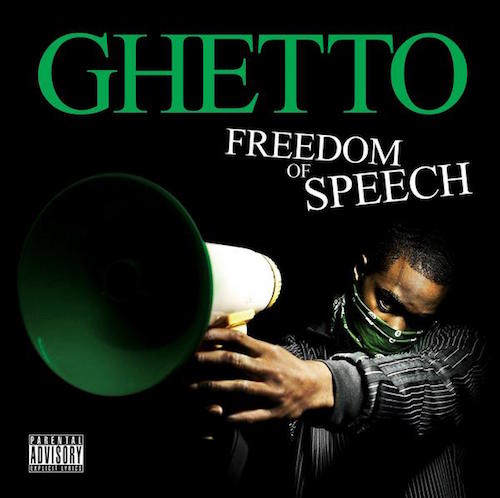 For American readers who recall the remix to Pharoahe Monch's legendary "Simon Says", imagine a full project from that Busta Rhymes, one that maintains such an intense yet impeccably delivered energy throughout. Unfortunately Busta's calmed down in recent years, favouring a reclusive life in the weights room instead of devouring microphones. As vicious as an angry Busta is, he's but a mere puppy compared to the rabid pitbull that is Ghetto (now known simply as Ghetts), who possesses an intense, schizophrenic persona on beats, often switching between whispering and wild ranting. If you can imagine Yelawolf and late 90s Busta Rhymes were merged in to one artist, and they had grown up in a tough area of London, you'd very likely be listening to something akin to Ghetto's "Freedom of Speech". It's a dark, brutal listen that's offset by the incredibly crisp, impeccably delivered rhymes from Ghetto (who is now simply known as Ghetts).

Production is an experimental blend of ringtone rap and electronica-infused Hip-Hop. Some of the tracks are almost a friendlier version of dubstep. "Buss 1" is a grim collaboration with Devlin, largely devoted to violent threats that's defined (again) by Ghetto's intense delivery. The third verse in particular is bottled lightning – something you'll want to rewind the track for.

Just as one song takes the crown for Hardest Track On The Album, another supersedes it. "Threats" is like listening to Sticky Fingaz going through an Incredible Hulk moment, as Ghetto responds to threats from enemies. He even puts on a voicemail message (allegedly from SLK's Van Damage) that calls for Ghetto. "Darkside Freestyle" is a breathless showcase of Ghetto's abilities, that never lets up. Coupled with the futuristic instrumental, it really should have been bigger than it was.

After an exhausting first half, the second part of "Freedom of Speech" is less likely to have you stabbing a member of the public in the face. "Fake MCs" fits in with the previous tracks thanks to a sinister violin loop but is more generic content-wise. As it was 2007 when this record was released, there are still some remnants of the Garage influences that spawned Grime. "Mountain" is definitely the quickest, most garage-like track here with "What It Takes" also steering Ghetto towards more accessible, friendlier tracks. The latter is the most rounded song here, with Ghetto even providing a catchy, melodic hook. "Who's Got" is an upfront admittance on Ghetto's part that nobody's got bars like he does, even calling out Wiley, Skepta, JME and Frisco. It's direct and definitely brash, but admittedly, none of those names are touching Ghetto/Ghetts on their best day, technically at least.

A lot of criticisms aimed at Grime music can apply to this album too, most notably the frequent use of flick-knives and threatening to stab anybody who opposes Ghetto and his crew. Even "Buss 1", which is an overbearing, haunting listen about using guns (and arguably the hardest track on a very hard album), lacks the nastiness of bragging about sticking a sharp blade in somebody. You've got to be twisted to enjoy stabbing someone, and there is a feeling that Ghetto likes "shanking" people, or he could be that passionate through his performances here that it comes across like he does. If you can stomach this dark side of Grime and want to listen to one of the fiercest emcees (British or otherwise) then you'll find Ghetto's "Freedom of Speech" to be one of the best Grime performances ever recorded to disc.