Compton's Most Wanted :: Music to Driveby

:: Epic Records/Sony Music
** RapReviews "Back to the Lab" series **
as reviewed by Steve 'Flash' Juon 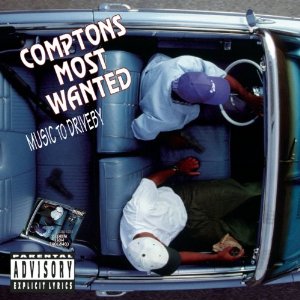 Whether or not the city of Compton, California wanted a reputation as a hotbed of gangster rap music in the 1980's and 90's is debatable. Compton is one of the oldest cities in Los Angeles County, and its history frames the story of hard working pioneers and immigrants struggling to make it in the U.S. quite well. Caucasians, Mexican settlers, and black families migrating from the Jim Crow era South all called this growing neighborhood home - working side by side to scrape out a living in an initially harsh environment with few resources available. Through hard work they built something out of nothing and Compton became a modern urban city in the 20th century with all the amenities one would expect - and unfortunately more crime than anyone ever expected. A trifecta of factors gave Compton an undesirable reputation - the rise of gang culture in the 1970's and 80's, the emergence of crack as a way for gangs to make money.

The end result of course was bloody violence as those gangs competed for their share of the profit. Compton was already of modest means compared to other cities in the surrounding area, so drugs and violence quickly flourished as frustrated and disenfranchised youth took what they viewed as the only means of success available to them. Soon Compton was on most top 20 lists as one of the most violent and dangerous cities in America, and this reputation made rappers from Compton seem "harder" or "more real" than those from other cities. This became a problem in and of itself as many rappers claimed Compton but weren't really from the city, and those who were had to deal with the automatic expectation that their whole schtick would be murder, murder, murder and kill, kill, kill. The audience buying rap CD's didn't mind if this caused artistic frustration - in fact they simply demanded more and more gangster rap coming straight outta Compton.

Groups like Compton's Most Wanted obliged. While many other rappers who bragged about their gangster credentials or alleged Compton street addresses fell to the wayside, CMW's leader Aaron Tyler b/k/a MC Eiht was born and raised in Compton. Were he not a compelling and interesting rap artist that would've been meaningless, but as it turned out Eiht's voice resonated across the rap landscape. In fact Eiht's trademark "g'yeah," his emotional delivery and distinctive California drawl ("peel" sounds like "pill" and "bolder" sounds like "border") made him an instant fan favorite to the detriment of fellow group members like Boom Bam and MC Chill. When Chill got sent to prison in 1991, the group became a group in name only. Much like Boogie Down Productions in the 1990's, the name existed for marketing purposes, even though KRS-One was the only member of the group people recognized and the only one heard rapping on the albums.

You could argue 1992's "Music to Driveby" was a solo album for MC Eiht and most people wouldn't disagree, even though he didn't officially go solo for a few more years. What may be controversial though is that this album represents the peak of CMW's relevance. I hate insulting Chill like that, especially since I've noted in other reviews that he was an underrated member of the group, but Eiht's rap here was as good as it would ever get and he didn't have to share the spotlight. As Eiht came into his own as a cinematic narrator of the violence, gangbanging and drug trade infesting his hometown, he was perfectly paired with beats that made those hard stories sound so sweet. The haunting Isaac Hayes samples DJ Mike T used on "Hood Took Me Under" made Eiht's somber rap that much more powerful. This was an evolution for gangster rap - rather than being proud of the violence, Eiht lamented his sorry fate.

"I got another gang story to tell
Peep, about how a black nigga was born in hell
And right then and there it's no hope
cause a nigga can't escape the gangs and the dope
Damn! And when its black on black, that makes it shitty
Can't survive in the Compton city
And fool that's bet
Cause when you grow up in the hood, you gots ta claim the set
G'yeah, it's not that you want to but you have to
Don't be a mark, cause niggaz might laugh you
straight off the motherfuckin block
Can't deal with busters, so they asses get clocked, g'yeah!
Who gives a fuck about another?
Only got love for my fuckin gang brothers
G'yeah, but I'm young so nobody would wonder
That the hood would take me under"

Eiht's tale was eerily reflected by the accompanying music video, as in each case a young man grows older and bolder "willing to die for this shit." Drugs and liquor ruin the protagonist, as "brain cells are dead and all I think is death" without knowing any regrets. If ever one song sold me an entire album, "Hood Took Me Under" did so for CMW. Thankfully there's so much more to this classic CD than just that song. In fact out of 18 songs there are so many highlights it's hard to name them all without making this review twice as long, so let's pick just a few. The Unknown produced "Def Wish II" ranks among the album's best, with a deadly melody aimed square at the dome of fellow Compton resident DJ Quik. Years later the rivalry between the two would be (mostly) quashed, but thanks to the Goodfellas movie samples that "shooting people was a normal thing, no big deal" and Eiht's menacing rap Eiht's vow to give Quik "two to the fucking jaw" became one of the most believable threats in rap's history:

"Nigga get ready cause you can't hang
with the psycho motherfucker who slangin these gangsta thangs
Lock your doors, run and hide
Can't nothin save you when the W hoo-rides
Peep - I'm puttin suckers to sleep
Ready to make a motherfuckin hit, geah we rollin too deep
You shouldn'tve made that tape, but you pushed me
Eiht hates punk-ass perm wearin pussies
Mmmm... you ready for round one? Here it come fool
I got my dick in my hand, come and get some
Damn, I'm tired of fake motherfuckers gettin pesos
Sorry-ass amigos screamin like bitch hoes
If it wasn't for your happy-ass sound, prancin around
Nothin but a sorry-ass clown, stay the fuck down!
Punk you can't fuck with this
G'yeah, first step is your Def Wish"

Quik wasn't the only target of his wrath though, as "Who's Fucking Who?" found Mike T and DJ Slip providing a minimalistic beat for his short but brutal beatdown:

"Attention mutherfuckers g'yeah attention
The brother who don't quit is back with the gangsta shit
Mike T, my mutherfucking right trigger
play the drums so I can buck this nigga
It all started like a game so watch him spit
When a fool tried to come up off a gimmick
So if it's tag, I guess it's my turn
I grab your bullshit cap and start to burn
Fool, you picked the wrong place, at the wrong time
So watch the driveby punk cause your ass's mine
I set the fire to the fuse so now its too late
Cause with your (wick wack) shit you can't touch the Eiht
The Comptonator, the Compton psycho
Compton, Compton, punk we stompin
CMW shuttin 'em down so start ducking
No where to run so you know who's fucking who
(Tim Dog... fuck you bitch!)"

Even songs with more standard gangster bravado lyrically still overachieved musically thanks to Eiht's smooth delivery and his crew of producers. "Compton 4 Life" would be generic 1990's rap sentiments were it not for that flow and the beasts by Master Ric Roc and Mike T. There are more layers of sound than can be counted, met by heavy bass, voices wailing "oooooooh" and samples of gunfire and fellow Compton rappers Eiht has no beef with. "Hoodrat" would be a sultry and seductive Unknown melody, but Eiht turns it into one of the raunchiest unapologetic "$10 motel" raps ever heard: "open your mouth bitch, here come the balls!" Too $hort might even blush at this one. There can be no question he's a misogynist on songs like "U's a Bitch," reminding his beau to be that she should know her place and mind her business around him:

"One more maneater, but perpetrate like your sweeter
But I'm hip to the game, I know your nothing but a cheater
Always tryin to game on my wallet
Fuck you or love you, how should I call it?
And its true, all you say is do
for you. and If you got a kid I guess I gotta do them too
Wrong, aint no rings on your finger
You've mistaked Eiht as some punk love singer
Saying your down with me, and only me
but I'm hearin you fuckin the neighborhood G
Little skeet, ain't nothin poppin
No snaps get spent until the panties start droppin
I guess a hoe is a hoe
but for you to gank me? Bitch, Eiht don't think so
You're nothin but a user
raised in the Compton streets girl you's a.....bitch"

The only cameo to report on the entire CD is Scarface on "N 2 Deep," and if you're only going to have one on the whole disc there are few better rappers to ask for a cameo then OR now. Let's be perfectly clear about "Music to Driveby," Eiht ranks as among the most unapologetic gangster rappers as there ever were or will be on this CD. When he's in G mode, he's advocating a violent and nihilistic lifestyle that surely would have led to his demise years ago if he practiced what he preached daily. The salvation of his rap is in some sense his self-awareness about it, the fact he can acknowledge death all around him, and his ability to tell such dramatic stories in a way that both he and the listeners live it without being caught up in it. "Music to Driveby" undoubtedly gave a great many young white teenagers a chance to live vicariously through his experiences, with beats and rhymes so compelling they still stand up to the test of time years later. Later MC Eiht albums lacked his acerbic wit, his observant eye and his compelling flows - he became a "g'yeah" caricature of his former CMW self. Here Aaron Tyler sounds like a man on the verge of being an all-time great, even if his CMW homies got lost in the process.

PS: Compton long ago lost its reputation as the murder capital of the United States to cities like Flint, Michigan. Somehow though nobody has ever seemed to cash in on their hometown's infamy quite like the late 80's and early 90's rappers of Compton, California.