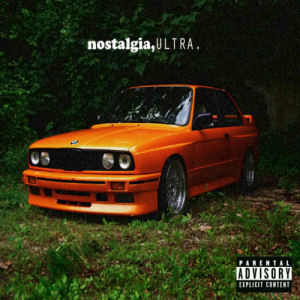 No pun intended, but this is a bit of an odd album. This is the album that really blew Frank Ocean up in a big way. This is the album Jay-Z was listening to when he decided Ocean should sing hooks on "Watch the Throne." The story goes that Beyonce had a bootleg of it playing in the car, and Shawn was just amazed at how good of a crooner he was, and the rest is history. This is one of those apocryphal hip-hop stories that's so good I'm not even going to complain if it's not true, because like most stories that revolve around Odd Future members, the more unlikely they are the better. It's just as likely he was a ghostwriter for one of Beyonce's songs - but again, who cares? Frank went from "that singer from Odd Future" to "that dude on 'No Church in the Wild' I like." He really took off, to the point that "nostalgia, ULTRA" was supposed to get a major label re-release and wind up on store shelves nationwide.

Unfortunately it never happened, and the reason why ISN'T a mystery. When he was just "that internet crooner" he and his producer pals freely sampled from various sources it would be cool for Ocean to sing over. They didn't really go out of their way to hide this fact - the album is called "nostalgia" after all. He sings over Coldplay's song of the same name on "Strawberry Swing." He sings over Mr. Hudson's song of the same name on "There Will Be Tears." Those weren't even the ones that got him in trouble. Don Henley was ABSOLUTELY LIVID that Frank Ocean had the TEMERITY to sing new lyrics over The Eagles' "Hotel California." Henley's spokesman released a pointed statement about the usage: "Frank Ocean did not merely 'sample' a portion of the Eagles' Hotel California; he took the whole master track, plus the song's existing melody, and replaced the lyrics with his own. This is not creative, let alone 'intimidating.' It's illegal." You can still find live performances of "American Wedding" all over the internet, such as in the YouTube clip below, but he now performs it to a completely different guitar part.

It's a damn shame really because whether Don Henley finds it "creative" or not, I really thought Frank Ocean's vocals over the track freshened it up. It would have been far better if they could have come to a settlement of some sort where Ocean gave up the publishing for the song, or gave Henley a royalty point on the album, but when you're as big as Don Henley and as famous as The Eagles you don't have to do anybody any favors. Some people might even believe it's racist, but I think it's clear the only color he sees is green, and he's simply not going to let anybody use the song unless they pay - and most people who would couldn't afford what he'd charge. Out goes the song, out goes the album, out goes any hope "nostalgia, ULTRA" sees the official light of day. That's especially absurd when given that Def Jam released two singles and filmed two videos for it, including the song "Novacane." "Uh-huh; I blame it on the
model broad with the Hollywood smile, oww
Stripper booty and a rack like wow
Brain like Berkeley
Met her at Coachella, I went to see Jigga
She went to see Z-Trip... perfect
I took a seat on the ice cold lawn
She handed me a ice blue bong, whatever
She said she want to be a dentist really bad
She's in school payin, for tuition doin porn in the Valley
At least she workin
But girl I can't feel my face
What are we smokin anyway?
She said don't let the high go to waste
But can you taste, a little taste"

Another strange thing about this official unofficial album that is but isn't is the interludes between songs like "Goldeneye" which consist solely of a tape being popped in a deck, rewound or fast forwarded, then stopped. While it reinforces the "nostalgia" theme since so few people use cassettes these days, it's misleading since the song titles like "Soul Calibur" would make you hopeful he's actually going to sing a song about the video game or over one of the instrumentals FROM said game. Putting that aside, if you can find this bootleg (and it's not terribly hard) "nostalgia, ULTRA" is a lot of fun. The lusty raunchy smutness of "Nature Feels" is brilliant, thanks to production by Andrew VanWyngarden & Ben Goldwasser, and Ocean's desire to make love "up against the cherry tree." The T-Wiz produced "LoveCrimes" is one of those trademark Odd Future songs where the pitch and tempo change up midway through, and Ocean rolls with the punches perfectly and flows from an upbeat bop to a slow ballad. The aforementioned "Strawberry Swing" is so sugar you'll get a toothache listening. This is a great album, and it should have come out, but Don Henley and Def Jam conspired against it.