:: PolyGram/Island Records
** RapReviews "Back to the Lab" series **
as reviewed by Patrick Taylor 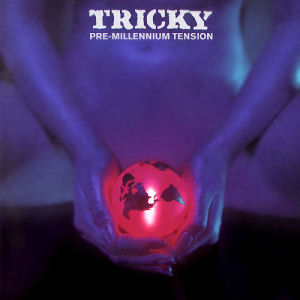 British rapper Tricky first made a name for himself as part of Bristol's Wild Bunch, which morphed into Massive Attack. After rapping on that group's albums "Blue Lines" and "Protection," Tricky struck out on his own with his 1995 debut "Maxinquaye." The mix of hip-hop, soul, electronica, and reggae was a hit, and won a Mercury prize. Tricky retreated to Jamaica to make his follow-up, determined to make a punk record that shed the trip-hop label he had been saddled with. The result is one of the darkest, dankest, paranoid albums ever made.

"Pre-Millennium Tension" starts off with the eerie backwards guitars of "Vent." Tricky, an asthmatic and heavy weed smoker, croaks:

Martina Topley-Bird chimes in with her honeyed voice, a perfect foil to Tricky's gravelly growl.

Right off the bat, Tricky is hitting you with a heavy sense of suffocation, and hinting at some disfunction in his relationship with Topley-Bird. The next track, "Christiansands" is Tricky at his best. The beat layers sounds on top of each other, including rumbling bass, heavy drums, and assorted ambient noises. The cherry on the cake is a heavily reverbed guitar line that adds just a touch of melody to the proceedings. "Always, what does that mean?/Forever, what does that mean?" Tricky asks.

"Tricky Kid" seems to be about Tricky's newfound fame, and also a piss-take on the jiggy rap that was starting to become popular in the U.S. "That one fronts/Bragging on your stunts/Coke in your nose/Knock out your gold fronts," he raps, before getting to the chorus:

The song could be a triumphant bit of posturing. Instead, it has an uneasy vibe to it. The song stumbles along at midtempo with a slightly distorted ragga beat. Tricky delivers his lines in a deadpan, and a guest MC shouts alongside him frantically. The song feels like it was recorded at four in the morning after an all-night drug binge while Tricky was wallowing in paranoia and the ill-effects of heavy cocaine use. In fact, a lot of this album could be seen as highlighting the downside of heavy drug use. There was a lot of ecstacy, speed, and coke being used in the U.K. club scene in the early 90s. By the time the millennium was closing in, music started to reflect the darker moods that come with constantly jacking up one's dopamine levels. The giddy rave of the early 90s gave way to darker jungle and drum n' bass, and "Pre-Millennium Tension" seems to reflect this transition towards darker, more introspective electronic music.

That darkness continues on the cover of Chill Rob G's "Bad Dream." Topley-Bird gives a dead-eyed rap over a distorted blues beat, detailing a harrowing tale of being ambushed in the streets. That song is followed by the gorgeous "Makes Me Wanna Die," another Topley-Bird solo track about getting too high. The entire song is built around a subtle beat, restrained guitar, and Topley-Bird's voice.

The first five songs on the album are absolute classics, but the second half of the album isn't quite as strong. "Ghetto Youth" is a five-minute spoken-word piece with Sky speaking in heavy Jamaican patois over a stuttering beat that doesn't go anywhere. Things pick up on "Sex Drive," with its propulsive beat back by a harmonica, of all instruments. The momentum is immediately lost on "Bad Things," a slow song that never quite coalesces into anything. The cover of "Lyrics Of Fury" picks things back up, with Topley-Bird doing justice to Rakim's rhymes over live drums.

"I've been around for long, my evil is strong
I lie awake and hate you
Maybe that's strong enough to make something happen-
A car crash, make you pay with a weapon
A gun in your mouth, my voice in your mind"

"Pre-Millennium Tension" ended up being the apex of Tricky's career. Each of his follow-ups has seen diminishing returns as he has attempted to branch out in new musical directions. Maybe he needed to. Even on this album, there were signs that he was running out of ideas with his signature sound. He spends too much of the second half of the album on languid downers that are all mood and no substance. Even with those criticisms, it is an incredible album. It perfectly captures the paranoia and dread that you sometimes feel in the early hours of the morning when you've been up all night killing brain cells, the sense of loneliness and isolation when the house lights come on and you can see how tired and tore up your fellow revelers are, the depression that sets in when the drugs stop working. It's a beautifully realized album, and one of British hip-hop's finest moments.