:: Bad Boy Records
** RapReviews "Back to the Lab" series **
as reviewed by Steve 'Flash' Juon 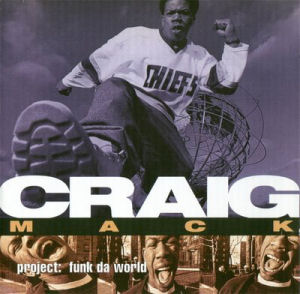 Rap fans under the age of 18 may be entirely unaware of Craig Mack. That's only fair given the Bad Boy rapper achieved his greatest height of fame in 1994 with the single "Flava in Ya Ear," and a popular remix of the single only exacerbated the notion he was nothing but a one-hit wonder. To make matters worse, his labelmate and rising rap phenom Notorious B.I.G. was blatantly disrespectful toward Mack in interviews of the day. Biggie said he only appeared on the remix "for political reasons" and gave the unflattering remark "nah I don't fuck with that dude" when asked if Mack would have any cameos on his own album. Though they were the first two artists to release albums on the fledgling Bad Boy Records, separated only by a week's time in stores, in truth they couldn't have been further apart.

As Mr. Wallace's star continued to rise at a pace faster than even his friend Sean Combs could have expected, the brash lyrical stylings of Mr. Mack quickly took a backseat at the label. It took almost three years for his sophomore album "Operation: Get Down" to come out, and only after he had split from Bad Boy Records to do his own thing. That album is another subject for another day, and believe me there's a lot to be said on that subject, but for now his one and arguably only major success in rap is our focus. The album's self-produced intro seems to confirm what a lot of people thought of Mack at the time - that he came virtually "from nowhere" and achieved stardom, though in truth his debut came six years earlier as MC EZ on the seminal hit Get Retarded. To be honest his style didn't change that much in the interim. Here are his defining characteristics:

Now other than the EPMD-esque qualities of the first trait, it's not readily apparent that a guy who sounds like he smoked a whole pack of menthols before each track and doesn't bother rhyming would be dope. In fact this is actually what made Mack so successful in 1994 - he literally sounded like no other rapper in the industry and as he bragged "my rhymes are guaranteed to grab ya" on the track "Making Moves with Puff" it was literal truth. By combining his unorthodox sound and technique with a producer like Easy Mo Bee, "Flava in Ya Ear" became ubiquitous from the moment it first aired on any station anywhere. While you can humorously debate the irony of his line "you won't be around next year," his boisterous flow mixed with Mo Bee's minimalistic beat and bass had everybody fan of rap imitating his "HAHHHHHH" and memorizing his lyrics:

"HAHHHHHH!!! The Mack's dope
With more hope than the Pope
but for emcees more knots than rope
I'd like to break it down, down-breakin, forsakin
lords of emcees shakin with this track that my man's makin
Emcees will run like a bomb threat, I bet
or better yet, make you sweat
Gettin hotter than the sun get
Craig Mack is the flav that romps from here to Tibet (boiiii)
I break all rules with my actions
that the Mack sends, to emcees, stop relaxin
This brand new Sherrif that's in town
is gettin down, leavin' bodies buried in the ground (rest in peace)
I set up rhymes for a decoy
Now I'm a +Bad Boy+, watch the emcees I destroy"

While it may be true that nobody born after 1994 knows Craig Mack, nobody born between 1974 and 84 can ever forget him. That one-of-a-kind flow and vocal tone had a unique appeal, and as a lyricist Mack had moments of wit, humor and straight up swagger that were undeniably fun. Unfortunately "Project: Funk Da World" seems to have been designed literally overnight to capitalize on the success of "Flava in Ya Ear," with the quality of songs and the lyrics within varying wildly from track to track. "Funk Wit Da Style" is an example of where the album goes completely off the rails - a track by produced by Lenny Marrow and Mack that never gets out of first gear. You can hear a little of the same Emotions break that Big Daddy Kane rapped on for the classic "Ain't No Half-Steppin'," but it's buried under a layer of mud and paired with one of the most awkward hooks in history: "If you can't funk with the style that's goin on, then you need to be sittin down." Seriously?!

Sometimes even the good songs are bad. Craig Mack's self-produced "Real Raw" is on one hand brilliant, because no rapper before or since has thought of rapping over the intro music from the soap opera "Days of Our Lives." On the other hand, his lyrics are unbearably simplistic, and his delivery is so plodding and slow you want to turn the RPM up from 33 to 45. Weak punch lines like "weaping willow, grab a pillow, 'fore I have to diss you" have no weight or impact except to make you laugh at how cornball they are. And yet when it all came together, like when Easy Mo Bee produced the album's second track "Get Down," the star potential of Mack could not be denied.

"I'm incredible; better eat ya vegetables
Cause... I does what I do (do it!)
I fake the roof off of soft suckers, super smackin
Mack in full effect, mic check, one two
I'm a reign - reign forever
Rain like bad weather, reign like whoever never
You can't bite my style cause my style ain't a style
that is a style, so I can go buckwild
Betcha figure you got more funk for flow, it ain't so!
Flava in Ya Ear let'cha know!
Now I'm about a second from the hook
Duke strap your rap book
'fore you get your wet style shook"

It's the wild difference in quality between songs that makes "Project: Funk Da World" both fascinating and frustrating. Sometimes Mack seems to be channeling Ol' Dirty Bastard on tracks - I'm not sure he was sober while recording the vocals on "That Y'all." On other songs like "When God Comes" though, he spits a rap that's even more timely in 2013 than when he and Mo Bee first conceived it. "And radio needs to be ashamed/for pumpin murder murder murder all up in our brain [...] I hope the subject don't turn you away, but the whole hip-hop generation need to pray." WORD. Had Mo Bee and Mack collaborated on the entire album, or more going forward, Mack's place in rap history might be a little different right now. As it is Mo Bee's participation is right at 50% if you throw out the intro, and that 50% alone is worth owning. It's a historically important rap album, although Mack may have been unintentionally witty on "When God Comes" when he rapped "I tell you now Big Poppa don't like it." That fact alone may ultimately be what left his career in shambles.