:: Mello Music Group
** RapReviews "Back to the Lab" series **
as reviewed by Grant Jones 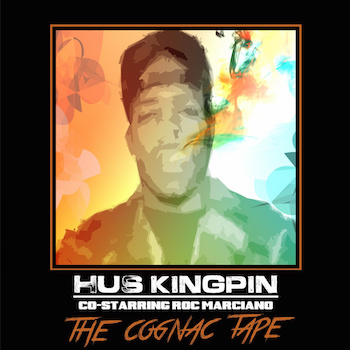 Rappers love their drink. Names such as Hennessy and Courvoisier have been used as substitutes for gaudy jewelry and flash sports cars for many years now, becoming household names in the process. Just as I've never sampled caviar, I've never sampled cognac - it's not really something I can slyly slip in to the shopping each week. Being British, vodka, rum and whiskey end up being the treats, or drinks you share with friends. But cognac? Not unless the Queen is popping round for dinner.

What does intrigue me about the alcoholic choices made by rappers, is those that aren't selling millions of records, yet still insist on living the lavish lifestyle that they speak of. Perhaps the best example of this (in recent history) is Roc Marciano, an underground icon who briefly flirted with stardom in Flipmode Squad, before slipping back under the radar in the 2000s. It's difficult to comprehend how an emcee that isn't a heavy tour artist is acting as a spokesperson for elitist alcohol unless they are employed by said manufacturer.

Of course, street thuggery and cooking crack may well be enabling some of these guys to keep living like Diddy, and the elaborate, fantastical tales that emcees such as Roc Marciano and Action Bronson cook up regularly remain interesting because they aren't just flaunting their wealth. We can add Hus Kingpin to the same list, as he is very much cut from the same cloth - probably silk, or cashmere. The reason I bring up Marciano, is that he actually hosts this mixtape, co-signing Hus Kingpin in the process. Marciano ties the tracks together with shit-talking, but his presence here is purely to lend his name to the project, given he was (and still is) one of the more respected names in the game.

But what of Hus Kingpin? Stylistically he's not dissimilar to Raekwon or Trife Diesel, but lacks the large vocabulary Marciano or Kool G. Rap possess. He's unlikely to garner a rabid fan base like any of these names may (minus Trife) but there's no doubt that he fits a beat more snugly than most. "The Cognac Tape" is presented as a mixtape, but may as well be an LP. You'll soon start ignoring Marciano's ramblings between songs and start to be reminded of some late 90s Wu-Tang affiliates such as Killarmy or Sunz of Man. The spiritual side of those groups is sadly devoid of any presence here, except where the rare (and surprising) appearance of Sepka Nitah shares her thoughts on "Crazy Skills". That's right - HER. Amidst all the testosterone and dick-swinging lyrical exercise, is a timid verse about her not being a sexual object. Considering the heavy, almost daunting theme of decay and survival (usually via criminal acts), it suddenly clicked that there is a distinct lack of misogyny for such a masculine record. It sounds odd to necessarily congratulate Hus (or Roc) for this, but the absence of the terms "bitch" and "hoe" is pleasing to hear.

One of the better tracks sees Hus collaborate with his colleague Smoovth from Tha Connection. "Strive" is a mellow journey through some rain-soaked alleyways, highlighting the chemistry Tha Connection have when sharing some shady tales of rolling dice and living violent. Marciano stops the drunken rants to deliver a verse that whilst not a song-stealer, does deserve to be third. Another dark gem is "High Rises", which closes the mixtape despite being the liveliest joint on here. Rozewood features, as he does on "Diamond Darts" which boasts a fierce HTN production that breaks from the standard, sleepier sound of the record. It actually sounds like dubstep lite, something the Wu-Tang Clan tried (and Brand Nubian to a lesser degree) before the likes of Rusko took over the world.

Minus the suspect "I go hard in the booth, like an erection" line on "Fly Threads" (shamelessly ripping off Edo.G), the mixtape is as street as anything out there. It does indeed "go hard", but Hus Kingpin doesn't quite leave his mark as much as I anticipated. Tha Connection however, are a crew I want to hear more from, and given this is only a mixtape that came out in late 2013, it's about time we heard more from Hus (and Marciano).