Blade :: The Lion Goes From Strength to Strength (No Compromise) 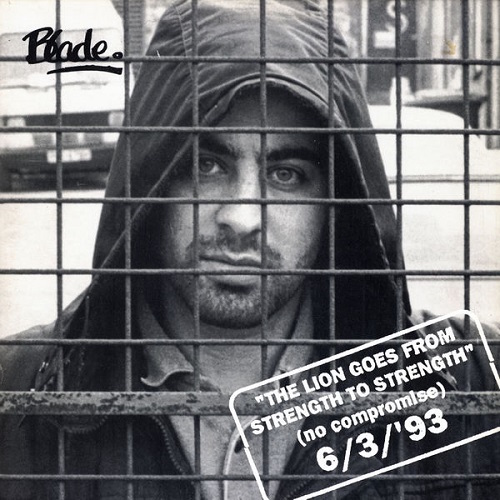 There was once a young man determined to put out a rap record. Now a hip-hop veteran, Blade tells his story in the sleeve notes that accompany the 2010 reissue not of that very first record but one that was a direct consequence of it. His first releases, the singles "Lyrical Maniac" ('89), "Mind of an Ordinary Citizen" ('90) and "Rough it Up" ('91), were financed by a variety of people such as restaurant owners offering dishwashing jobs, record store owners wanting to start their own label, unsuspecting pick-pocketed arcade gamers and sympathetic bank clerks. Having established an audience by selling these records hand-to-hand on the streets of London himself, Blade distributed his first ('mini') LP, 1992's "Survival of the Hardest Workin'," mainly via mailorder.

For his next project he was able to ask his thus established fanbase for financial support, which makes "The Lion Goes From Strength to Strength" the first fundraised full-length in hip-hop history. Donors were promised a copy of the new album (plus a limited bonus single), and once they came knocking asking where the album was, Blade knew he had to get going. He holed himself up for 16 days with aptly named engineer No Sleep Nigel and came up with nothing short of a testament to rap's enormous will power.

Born to Iranian-Armenian parents, Blade lived in Iran and India before coming to the United Kingdom at age 7. The death of his father and the pregnancy of his girlfriend fell into the time of this major career move. In 2004 he revealed in an interview: "Trying to fit all of this around recording the album was a bit mental, and there was a lot of things going on around in my head and I just wanted to get a lot of these things on the album." There's a term from that era describing serious rapping that comes to mind when listening to "The Lion Goes From Strength to Strength" - getting busy. Blade got busy on all levels, hurling his frustration and even moreso his determination in the listener's face. These rhymes come with exclamation points.

"Keep it Goin' On" is the perfect track to open such an intense record. Virtually revving to take off, the beat builds momentum until smashing drums, a muscling bass and slick fanfares form an impenetrable wall of sound on whose walk Blade fights with all his might. "I'm deep into my rap music," he sums up his dedication, assuring that "this is not a phase or a fad / walk with a pen and a pad." He defends his position on both the artistic ("It's all in the way that you portray it / What's on your mind, you got to say it") as well as the business side ("Learn the tricks of the trade and wait years to get paid? / I'm not a slave to the trade").

Thus the tone is set for an album that keeps the pressure up for close to 100 minutes. On previous releases Blade often rapped over familiar breakbeats. The close collaboration with No Sleep Nigel yielded a more robust and profound sound. "The Lion Goes From Strength to Strength" may be musically informed by the likes of Ultramagnetic MC's, Public Enemy and Tuff Crew, but there's an industrious aesthetic to it that makes it a prime example of the musical confidence British hip-hop had built by that time. Still there's an undercurrent of funk that many of the album's UK contemporaries didn't exhibit. Either way the beats are undeniably hip-hop, Nigel and Blade simply bring the noise in their own fashion. To quote the man himself: "There's nothin' for the soft and smooth / Still we bust the rhymes and bust a move / Back to basics, make it simple / 110 beats the tempo."

Accordingly, the tracks are heavily layered and range from the all-out sonic attack of "Fade 'Em Out" to the stomping but spacey "Start the Revolution" which isn't far from the first wave of Likwit Crew releases from the same year. All in all there are very few direct references to US rap. "...Or Get Crushed Like a Pumpkin" opens exactly like the Treacherous Three's "Feel the Heartbeat," but instead of attempting to revive old school hip-hop, the track switches to a sluggish, swaggering rhythm to which Blade flexes his flow more than usual just to prove that opposite a "jack of all trades," he's "the master of ONE."

Rock guitars are occasionally present, but the rock 'n roll happens on a higher level. It's in the attitude, the breathless, relentless forward motion and steady focus on the bull's eye. A song opening that actually goes "I got you by the balls, motherfucker..." But also the fact that the album offers (intended and unintended) comic relief here and there. There is little variation in the album's musical set-up - "How to Raise a Blade" is an acapella with a bit of piano strumming in the background, "It Feels Good to Be a Lunatic" is fairly funky, and "Fuck the System" is significantly slower than the rest of the tracks but breaks midway into a straight punk "Fuck the government!" bridge.

Some tracks were admittedly too hardcore for the average hip-hop head in 1993. But who with a modicum of hip-hop in their soul could resist the magnetic pull of the title track, or the clash of two rap titans, "Dark and Sinister" with M.C. Mell'O'? At times it seems that Blade drops bomb after bomb, the snowballing "No Compromise" with its familiar rock 'n roll piano followed by "Hold Your Own," whose opening "Hip-Hop! Hip-Hop!" chant the rapper backs with his typical adamant stance:

"The beggar couldn't be a chooser
That's what they used to say, but I refuse to
listen to the hunky-dory ways of a crackpot
I set the goal, so I'm goin' for the jackpot
Harder the better, I put it in a long letter
to the enemy to show that I'm the go-getter
Goin' against those who walk with their noses up
You know what time it is cause you know your time is up
[...]
Even though you see the record stacked on the shelf
when I walk the streets I wanna be myself
So when you see me around, this is for the best:
Don't say a word about how you think I ought to dress
Cause what makes a man is how he conducts himself
You wear a suit but everyday I see you kick yourself
Cause you did somethin' that you never should've did
You're confused and actin' like a fuckin' kid
Stop the cryin', think what you're buyin'
There's no need for lyin', or even relyin'
on others to do what you could do for yourself
Get your lazy ass off the shelf
and pull yourself together, never let it drag on
Some use the heavy, heavy beat just to brag on
But that's a waste of the seconds that tick away
Or maybe they got nothin' better to say...
Hey yo, you could be the one to defeat the competition
But me - I'm on a mission!"

For the most part, Blade's is a self-serving mission. That of "a hard-headed, single-minded label owner." At the same time the 23-year old leads by example, explaining in detail the state of mind required for truly independent artists:

"I'm workin' for myself, so they can never fire me
They can either hate or admire me
That's the way that I planned it"

"The system with the radio stations' overplayed
So many underrated, so many overpaid"

"I got to get my life sorted
So many things I need but never could afford it
Yeah, you know the feelin'
I knew some of the kids around were drug dealin'
I didn't wanna get involved
I just wanted to watch the records I made revolve
What's your problem, jack?
You're takin' a fall every time there's a setback
I got to care for my baby
I got to try to make some time for my lady"

The South London MC may oppose everybody from record store chains, distributors, the Capital Rap Show, "all the shitty rap labels," to the rave scene and the New Kids On The Block, but at his core he's not a destroyer, he's a builder - the masterplan firmly etched in his mind. One of Blade's most remarkable feats may be that he doesn't let the negative feelings take control yet still doesn't go soft despite having a song named "The Power of Positive Thinkin'."

Still from a critic's viewpoint not everything about "The Lion Goes From Strength to Strength" is a positive. He's clearly overwhelmed with the task of writing a double LP. Not only is the content largely monolithic, his criticism of his rap peers, for example, isn't particularly in-depth. He's defensive about the color of his skin, stressing rather unnecessarily that he's no Vanilla Ice or Marky Mark. The grim skepticism quite expectedly also spills over to political statements like "God Give Me Strength" and "Fuck the System,", and the few biographical details that are disclosed in "No Mercy, No Future," "100%" or "How to Raise a Blade" get lost in the mix. Also there would have been a general need to be lyrically more selective and sharp, especially given the length of the album.

Nonetheless "The Lion Goes From Strength to Strength (No Compromise)" as a whole makes a hell of a clear statement, even heeding the old saying that silence is golden ("Silence Is Better Than Bullshit"). With the artist's focus strictly on this double slice of vinyl (reissued on two CDs in 2010 - the original CD edition was abridged), there were "no edits for the radio, no cash for the video" - and the album was all the better for it. Where rap is often diluted by compromise, in 1993 Blade delivered a consequent record if there ever was one. An inspiring act of autonomy, "The Lion Goes From Strength to Strength" is a detailed blueprint for independent hip-hop artists and a working man's rap album in every sense of the word. If genius is one percent inspiration and ninety-nine percent perspiration, Blade was working so damn hard that inspiration inevitably came to him.