:: One Love/Mercury/PolyGram
** RapReviews "Back to the Lab" series **
as reviewed by Matt Jost 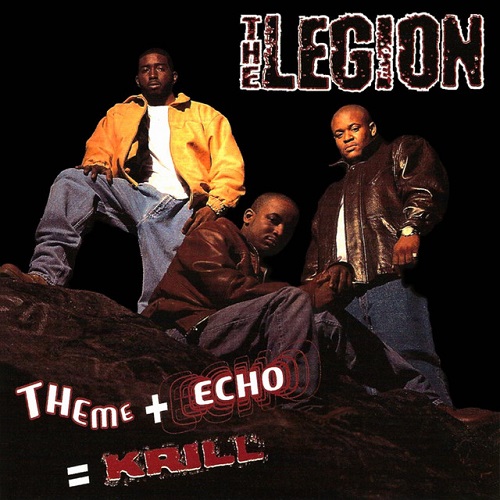 At one point, The Legion must have had a clear conception of what in 1994 could eventually be heard on their debut album: We're going to represent for the BX and pay tribute to the old school and the eighties, we're going to hook up with some solid folks who already have a standing in the industry, we're going to rock mics and crowds, etc. That can all be witnessed on "Theme + Echo = Krill." It's just that the finer points of making a competitive, convincing hip-hop record didn't get over all that well.

They certainly deserve recognition for inviting one of hip-hop's most legendary club DJ's, Brucie Bee. He can be heard during a number of breaks, actively commenting on the proceedings. The trio obviously has a connection to the DJ and his longtime residency, The Rooftop in Harlem, a roller rink/nightclub that not only attracted a crew of notorious Harlem hustlers but also future Legionnaire Molecules:

As the album progresses, however, the sound of it itself seems to echo the distorted, distant pounding you may be exposed to in a club away from the dancefloor, across hallways, stairways and doors. To top it off, there's an interlude called "Back in the Days" which they dress up like a tenth generation dub of a Brucie Bee mixtape. With all due respect to the aesthetic idea of, to say it with The Roots, 'distortion to static' (and the many times it's been applied successfully, particularly around that time), twenty years later this album is often the equivalent of something that has been sitting in the crevices of your couch for far too long to be recognizable, let alone useful.

They also take 'making noise' very literally, seldomly rapping without raising their voices. Yet vocally they lack the power of Onyx, the exuberance of Lords of the Underground, the creativity of Leaders of the New School, or the suppleness of Naughty By Nature. Their movements on the mic are not entirely without grace. They stretch their vocals over the slow-flowing "Krill Ill," break the bucking rhythm of "Jingle Jangle," and "Once Upon a Time," where each member revisits points in his biography, is completely devoid of any posturing, see for example the part where Chucky Smash submits his decision to not get caught up in the drug game.

There is a basic, functioning flow to the album, beginning with the reasonably brief introduction round "Enter the Realm," a musically memorable combination of epic horns and echoing voices. "Jingle Jangle" sounds like an outtake from Black Sheep's second album, but also recalls M.O.P.'s debut, the way a jazzy disposition disciplines chaotic horns and swishing rhythms, and while Black Sheep Dres dispenses his lyrical wit ("Y'all bounce off the wall / our sounds are on the corners like the Final Call"), The Legion detail their hardcore credo.

Living up to their name, the Legion are very conscious of the fact that they're a unit. Most of the time they seem just content letting the mic circulate, cypher style. As a matter of fact, they appear to derive satisfaction from rapping in a fortifying environment. Even if you don't feel the same way, you can easily picture Chucky Smash "mesmerized by the sounds, standin' by the speaker" as partner Cee-Low produces lines like "Jammin' like jelly to the top / Smackin' bitch niggas like belly flops / Blowin' up the spot when I rock" over the shrieking horns and plodding pace of "Step to the Stage." The flows stay rough even for the smooth "Legion Groove," but a lyrical cut-in like "Chucky Smash (What up?) You know my voice is gettin' tired / Get on the mic because you just been hired" is charmingly old school. "Zootie Bang" also seems to be sonically aware of the fact that it's meant to be a party track while Cee-Low makes use of the lesson he learned from Black Sheep's "Strobelite Honey." Dres and Mista Lawnge both produce tracks, although only three in total. Showbiz lodges another one, but the bulk of "Theme + Echo = Krill" is self-produced. Between "Jingle Jangle" and "Who's it On Part II," there's a number of potential mixtape joints. Just don't expect the level of excellence you may be accustomed to from that era. In particular, The Legion lacked the finesse of other '90s acts that looked at previous decades from a nostalgic angle, such as Wu-Tang Clan and Camp Lo.

By the same token the sheer rawness of this album is one of the aspects liable to attract listeners. That extends to the lyrical content. It's easy to brand assertions that they "wrap like foil" and "lay ya down like carpet," evidently humdrum wordplay that doesnt't quite gel with "too damn exquisite / complex like physics" boasts. But The Legion banks on crowd support to win critics over. As they say in "I Like the Way It's Going Down": "Now say it loud: I'm hardcore and I'm proud."

What's more, they allow themselves to escape their self-chosen consensus. Out of the blue they decide to tackle one of rap's heavier subjects. Placed between two on-topic interludes, the song "New Niggas" discusses aspects of the n word in a serious manner, not on an academic level, but to an extent you wouldn't have taught this group being capable of, based on the events so far. Not stopping there, closer "Rest in Peace" shares the overwhelming emotions that the news of the death of a close person can trigger, in this particular case all victims of violence. Set to a respectfully reserved beat, it's the kind of emotional finale one couldn't see coming but which feels nevertheless genuine.

Ultimately "Theme + Echo = Krill" doesn't depend on these pensive moments, as welcome as they are. At one point Cee-Low talks about being ready when fate knocks on your door. There's some indication that they themselves weren't fully prepared, even as they let the world know that "The Legion's in the house" back in 1992 on Showbiz & A.G.'s "Runaway Slave." But their home and their history unquestionably had these "three brothers from the Boogie Down Bronx" prepared to humbly but proudly present their definition of hip-hop at a time when others took the genre to new heights.