:: G-Funk/Def Jam Records
** RapReviews "Back to the Lab" series **
as reviewed by Pete T. 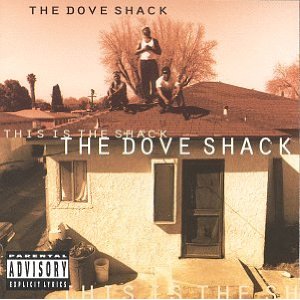 Despite its countless invaluable contributions to the hip hop canon and its status as the flagship label of rap music, Def Jam's historic two-and-a-half decades haven't been without a few disappointments. The infamous label's influence is undeniable, but as an international trendsetter and the world's largest hip hop-focused conglomerate, detractors are quick to point out its shortcomings: a perceived preference to signing marketable artists before talented ones, disloyalty to signees, Jay-Z's rocky tenure as president, and a whole lot of industry rule #4,080, in spite of the company's humble beginnings and early status as a niche label.

An often cited example of Def Jam's inadequacies is the label's utter failure to successfully promote West Coast artists. Established and headquartered in New York, Def Jam has always been an East Coast brand, and throughout its history its most bankable stars have been from the five boroughs—household names such as LL Cool J, the Beastie Boys, Cam'Ron, Ja Rule, and Onyx. With the rise of young superstars such as Dr. Dre, Snoop Dogg, and 2Pac in the mid-1990s, however, Def Jam watched the national spotlight shift to the West Coast and a new generation of gangsta rappers. While they may have been a little slow to the trigger initially, the label scored a surprise multi-platinum hit in 1994 with Warren G's "Regulate... G-Funk Era" and proceeded to move in on other respected acts from across California. What followed is still a matter of debate. Some have speculated that, as an East Coast entity, Def Jam simply lacked the resources to push its West Coast acts. Others have suggested that the label just didn't pump enough money into their West Coast investments, dooming the projects to fail from the beginning. Conspiracy theorists have even argued that Def Jam's inability to promote its West Coast artists was a conscious strategy during the coast wars of the mid-90s. While the latter may be a bit unlikely as a business tactic, it did seem that Def Jam's infamous promotion machine just wasn't working for its West Coast clients—singles failed to garner national airplay, videos made few waves—even while the label's East Coast acts continued to stack platinum plaques. One thing that is for sure is that veteran acts including Jayo Felony, WC, Richie Rich, BG Knocc Out & Dresta, Domino, South Central Cartel, and even Warren G did not leave the label on good terms and struggled to regain their footings in the years that followed.

In the wake of "Regulate... G-Funk Era," Def Jam granted Warren G distribution for his upstart G-Funk Records and inked his Long Beach protégés Da Five Footaz, Twinz, and the Dove Shack. Their good fortune was short-lived, however; Da Five Footaz never released an album, despite numerous well-received guest appearances by members Malik and Jah-Skillz, and Twinz and the Dove Shack released just one album each. It's easy to surmise that Warren G felt pressure to capitalize off "Regulate... G-Funk Era"'s success, but the direction of his creative energies is a tad perplexing. Twinz' brilliant debut "Conversation" and the Dove Shack's "This Is the Shack" shared a release date of August 25, 1995, but Warren produced thirteen of the former's fourteen tracks and only one of seventeen on the latter, itself a track that had already appeared on "Regulate... G-Funk Era"

The Dove Shack was a trio that consisted of rappers 2Scoop, C-Knight, and Bo-Roc. 2Scoop and C-Knight are fairly run-of-the-mill; completely capable of flowing over a beat and piecing together sixteen bars for a verse but rarely memorable. Bo-Roc is the obvious star, a solid rapper but a phenomenal singer. His deep and soulful voice provides highlights with rich hooks and made him a sought-after guest performer in his day—chances are if you're a West Coast fan you've heard him on tracks with E-40, Tha Dogg Pound, Bad Azz, and Crooked I whether or not you're aware of it. Bo-Roc is a distinct vocalist of the Nate Dogg mold—a crooner in the g-funk world of c-walkers and gang-bangers—and makes the Dove Shack stand out from the legion of interchangeable g-funk acts from their city in the mid-90s.

While much of the material on "This Is the Shack" could be categorized as fairly ordinary g-funk, Bo-Roc's performance and the production make it a lasting listen. As previously mentioned, Warren G only produces one track, the title track, which made waves the year before on "Regulate... G-Funk Era" as the quirkiest yet one of the most irresistible songs on his landmark debut. It's given a slight overhaul here by way of a lengthy intro and slightly modified outro, but otherwise the song that put the Dove Shack on the map is here in all its glory, endearing listeners with its sunny synth arrangement and funky guitar line tailored for summer, good-natured hook from Bo-Roc, and verses detailing the laidback yet rough-and-tumble Long Beach lifestyle that they refer to as g-funk:

"It's ya muthafuckin' third letter of ya alphabet
Put Knight at the end of it, it's a nigga you can't get with
Funky styles, I be showin' niggas
I be blowin' niggas straight out they socks, because
The Dove Shack is comin' more twisted than dreadlocks
Now plot on the shack if you wanna
But if you get caught slippin', we will be dippin'
Down your block just to street-sweep your spot, nigga
But you can still follow along, grab ahold of my nut sack
Because I've got the doja, oh, I haven't told ya?
Much love to my nigga Warren
He's a G, hook me, now I'm getting' funky
I'm chillin' with my feet up on the table in the shack
With my revolver, problem solver
Waitin' for a nigga to fuck with this
So I can let his ass know who he is"

This might bring the listener to question what exactly the group's name refers to. While initial logic would suggest that it's a cryptic pun likening "dub sack" to "Love Shack," the trio maintains that the Dove Shack is actually a place in Long Beach. Judging by the cover, it's a place not too far removed from the corner of 21st and Lewis immortalized on "Regulate... G-Funk Era"'s cover, and based on the lyrics one can surmise that it's a spot where relaxing if not slightly illicit activities can be had in abundance.

The producers not named Warren G who handle the other 16 tracks prove surprisingly effective at executing the style he pioneered. The Dove Shack and their assembled team including Clizark, Young Jedi, Crazy C of Rap-A-Lot fame, and, most unexpectedly, Jam-Master Jay of all people, use similar approaches to evoke similar laidback, soulful vibes to the G-Child. The opener "Smoke Out" is a perfect example of the Dove Shack's immediately appealing style. With a subtly horn-laden beat ideally crafted for a lazy, warm afternoon, the trio details "a smoke-out in my backseat" between a strong hook by Montell Jordan himself. Lyrically it is fairly regular, but one can't help but be drawn in by the smooth, nod-inducing music and well-meaning sentiments of the Dove Shack. The same can be said of the standout "Summertime in the LBC," of which two versions appear on the tracklist. The first is a Bo-Roc and Anita Porter duet that allows the versatile Bo-Roc to flex his R&B chops over a simple yet gorgeous backdrop of smooth bass and wah-wah guitars. The sound and structure evoke classic soul, but Bo-Roc's verse depicts Long Beach as he knows it:

The second version adds short verses by C-Knight and 2Scoop further detailing summer's "three months of pleasure" but leaves the excellent production and hook of the first. The misogyny of the woozy "Fuck Ya Mouth" still feels good-natured amidst the slow instrumentals and Bo-Roc's commanding hook, and "East Side Party" further develops summertime California imagery, albeit in a smoky house party setting.

The Dove Shack has a little harder edge than Warren and the Twinz, not so quick to overlook the rough ghetto life in their celebration of good times. Crazy C's phenomenal beat on "Ghetto Life" gives the listener a taste of Long Beach after the sun goes down, with a rough percussion arrangement and snaky bells. It would have been hard to come off whack over such great production, but 2Scoop gives the listener a strong taste of the dark side of urban life:

"Now all through high school I relied on drug-smugglin'
'Cause I was broke, a nigga was straight strugglin'
Not knowin' where my next dollar's comin' from
But I got a gun, there's the double up, man, I'ma jack one
How I'ma let the fool be up when I'm on the bottom?
Anytime you broke, a lot of friends, you ain't got 'em
To be a young man you got to be ready
'Cause in my house, there was no fuckin' daddy
in the home, I roam with the homies from the block
Experiencing puberty, clockin' dough and passin' glocks
I remember at the party, the hoes didn't like me
'Cause when the party was over I rolled out on my Nikes
When times get rough and tough
I'm go'n grab that bud and take a super puff
Endo high, I relied on the bud for the pain
And stayin' level to the ground and true to the game
You can't jump on my escalator if you ain't need it
I'd rather pull a lick and stay weeded
Lurin' you into the alley, smooth but fast
Now I'm headed to the shack to count your cash"

"Rollin' Wit a Gang" also has a deep nighttime vibe and great production, and the funky "We Funk (The G-Funk)," a celebration of their beloved genre, is also great fun. Some of the best production is to be found on "There'll Come a Day," with its clever flute instrumentation and well-arranged hook.

While it hits a lot more than it misses, "This Is the Shack" has its share of lowlights. The rugged yet forgettable "Bomb Drop" was a poorly-selected first single, failing to portray the group's smooth, appealing g-funk sound on a boring and fairly awkward attempt at hardcore. "Freestyle" doesn't quite feel genuine and still isn't as impressive as they seem to think it is.

A tad inconsistent but better than the sum of its parts, "This Is the Shack" is an album that keeps me coming back anytime the weather gets nice. While not quite on the level of the other two, I still tend to consider it one of the Warren G's G-Funk Records triad along with the immaculate "Regulate... G-Funk Era" and "Conversation" despite Warren's lack of direct involvement—together comprising a collection of some of the most relaxing, feel-good g-funk music of the mid-90s West Coast explosion. The Dove Shack's further recordings, including solos from Bo-Roc and C-Knight and a final group effort titled "Reality Has Got Me Tied Up," never found good distribution and faded quickly, leaving "This Is the Shack" as their sole mark on the g-funk movement. An exemplary summer listen, it has aged well and stays in rotation among fans of the smooth, soulful, brilliantly evocative West Coast g-funk sound.