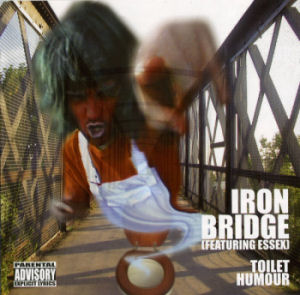 As a Brit, I'm heavily biased when I say that British humour is the best in the world – despite being spelt with an unnecessary ‘u'. Hip hop from the British Isles has certainly lightened up as time has gone on, with acts such as Sway and Dizzee Rascal using wackiness to aid their character. Stig of the Dump often relies on his extreme alcoholism and abrasive language to grab a cheap laugh, while chart-toppers like Tinie Tempah regularly use silly lyrics to keep their content down-to-earth (I doubt he actually keeps his clothes at his Aunt's house). What separates Iron Bridge from these artists is that they had never wanted to be taken seriously; most of their debut (and unfortunately their only album) is full of outrageous boasts, mum jokes and most importantly – toilet humour. What makes this record worth a listen is its mix of poignant honesty and insane rhymes. Iron Bridge are two rappers; Dirty Verbals and Jibbarish. More often than not, an emcee's name means absolutely nothing, but these artists are quickly summarised by their appropriate names. Hailing from the outskirts of London, an area of England called Essex, the two have brought along many of their cronies, and the album cover states that it is Iron Bridge (featuring Essex).

After a grimey introduction that proclaims "bow in our presence, peasants", "Dance For Your Daddy" sees the album make use of a sinister Ray Winstone sample from the film Scum, but it's the wild rhyming that can't help but raise a smile. Ron Compost drops some memorable verses throughout the album, but his 8-bar verse here combines necrophiliacs, asking to stay at the listener's house because he has defecated in his bed, and then retching like a sick dog. The anarchic content of many songs on "Toilet Humour" will certainly only appeal to a niche audience – having bought this CD as a sixteen year-old boy, the album's combination of British schoolboy antics and gritty, barebones production was right up my street. Despite the record often feeling like a bunch of mates that have too much spare time on their hands, it is a fun, if messy journey that never feels like it takes itself seriously.

Whereas many British emcees of this ilk (in 2013) are promoting drugs and swearing unnecessarily, Iron Bridge feel more slapstick. Particularly when a concept song is thrown in to the mix with "Scientifical Cypher", an excuse to exercise ever-increasingly silly rhymes – take Essex rapper Wisdom for example: "I'm an educated man with an intelligent form of wit, my cleverness seduces fakes and makes irrelevant emcees produce excrement in the form of bricks". It's often ridiculous, often amateurish but constantly entertaining. "Get Up" is a solo cut from Jibbarish, essentially a showcase for his ability to fill a track with tongue-twisting rap. It's aided by an incredibly low-budget video that looks like a colourfully deranged version of the "Shook Ones Part 2" video. There's no doubt that songs like this have inspired countless British rappers playing the comedy card, whether it be the puerile behaviour on the song "Toilet Humour" or the ode to gamers on "We Got Game", Iron Bridge remain somehow likeable through all the immaturity. The boys take it to horrorcore on "They're Comin For Ya" but the song is effectively a bunch of mates talking shit. Darkness is explored further on "The Howling" which must be the first (and only) example of werewolf rap. Lyrically, Jibbarish provides his insane narrative of the transformation he undergoes before hitting the listener with more violence. As fun as it is hearing a supposed werewolf take time out to rap, it's the surprisingly crisp production that is strongest.

Production throughout is handled by Illson, who provides a primarily minimalist sound that is largely basic but effective. There are some admittedly weak beats here and there – "Psychonauts" feels incomplete, while your view on circus-style production will determine whether you can endure "Essex Boyz" and "Toilet Humour". The album is filled out by the odd nothing-track; "Way of Life" sounded barebones in 2003, and suffers from Dirty Verbals' lack of polish. To be fair, Jibbarish consistently outshines his rhyming partner, possessing a flow that often speeds up to deliver multi-syllabic rhymes. Some of his rhymes can bypass your ears at times, and his character is actually enhanced on the more sociological tracks like "International Relations". American listeners will likely find "Ill Mentality" to be the most accessible track on "Toilet Humour", which is saying something. A potent Pharaohe Monch line ties the wildy braggadocios verses together, with Ill Psychosis dominating proceedings.

It's hard to imagine emcees such as Dirty Dike having careers without Iron Bridge. Granted, "Toilet Humour" isn't a great piece of hip hop, but in 2003 this album was refreshing to hear amongst the more intense listening experiences from Jehst, Klashnekoff et al. While it is hard to find nowadays, it is worth hunting down for a cheap laugh.