:: Ruffhouse/Columbia Records
** RapReviews "Back to the Lab" series **
as reviewed by Steve 'Flash' Juon 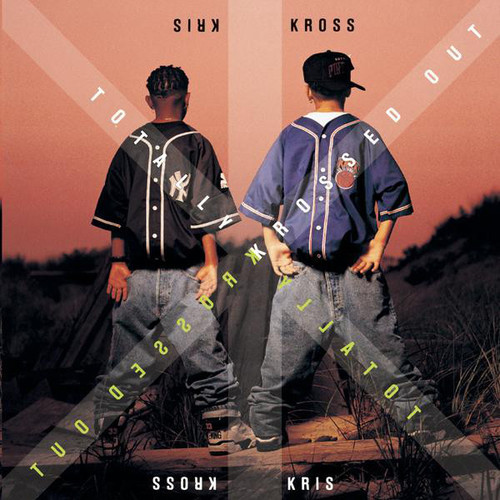 I sat and pondered three different ways to tell the Kris Kross story before writing this review. The first way would be to talk about the rap group fad of the early 90's that involved discovering and marketing younger emcees who could put a more friendly face on hip-hop. Believe it or not even your 1990's hardcore QB hip-hop favorite Mobb Deep started out in "Juvenile Hell" dealing with "Peer Pressure." Their contemporaries were groups like Da Youngsta's and Another Bad Creation, although arguably the most famous and successful of all these crews was the Jermaine Dupri fronted creation and the "Totally Krossed Out" album covered here. It was such a crossover smash (four times platinum) it even briefly created a national fad of wearing your jeans backward. You'll think I'm kidding but I came of age when this album hit big in both pop AND hip-hop, and my high school actually had a "backwards day." The success of the marketing of this group was something else.

The second way to tell the Kris Kross story would be to focus on the fact their rise to super stardom at such a early age created the same phenomenon we see with saw with so many actors on shows like "Diff'rent Strokes," showered with money and adulation and little responsibility or guidance on how to deal with both. This turned out to have fatal consequences for Chris "Mac Daddy" Kelly later in life, as each album after "Totally Krossed Out" had diminishing returns with increasingly higher expectations to repeat their initial success. That pressure led to drug use and abuse which caused Kelly to spiral further and further downward. A fourth album recorded in the early 2000's was never released, and his final performance with Chris "Daddy Mac" Smith was at their mentor Dupri's 20th anniversary concert for his So So Def imprint. Ironically Kris Kross was never even part of the label, as it was their success with Ruffhouse/Columbia that launched Dupri's career as a producer and gave him the clout to start So So Def in the first place. Kelly died of an oversode on May 1, 2013.

The third and final way to tell this story is how I came to the personal decision to review this album - a chance encounter with one of the hit singles from "Totally Krossed Out" while listening to Sirius XM's Backspin channel on a recent (and rare) day off with my wife. We drove around, we went to the pool at our neighborhood gym, we bought Chinese food, we thoroughly enjoyed ourselves. As the sounds of "Warm It Up" came booming out of her car speakers, I stopped and pondered that I might not have given Kris Kross a fair chance in my high school days simply BECAUSE they became an overnight pop fad and people did dumb things like wearing their jeans backward. They didn't tote guns or drink 40's - they just wore their pants in a way that wasn't intended. My hip-hop tastes had taken a mature turn though years ago to artists like Public Enemy and N.W.A so I rebelled against THEIR rebellion. I wanted no part of it. I acknowledged "Jump" as a catchy pop hit but dismissed them the same way they dismissed Another Bad Creation - as lesser rap artists not worthy of serious discussion. The above song was my single biggest gripe about Daddy Mac and Mac Daddy though and it really isn't even their fault. If you bought "Totally Krossed Out" this wasn't the version of "Warm It Up" you got a very bland and banal version of the song compared to the G-Funked and kicked up Jermaine Dupri remix that made the s--t a hit. To me it was like the most blatant form of false advertising possible and my indignation was RIGHTEOUS. It was like "My God - I gave this stupid gimmick group a chance because I liked THREE of their songs and they ripped me off by only giving me ONE!" What was the other one that wasn't included on "Totally Krossed Out" you ask? Well that's "I Missed the Bus" - which like "Warm It Up" is represented via a completely less funky version on their album. First here's the single/video version: Not bad right? But here's the actual album version: Not even close to being the same song. Still in hindsight as I listen to "Totally Krossed Out" there are a lot of things I can appreciate. Ignoring the hypocrisy of Mac Daddy and Daddy Mac bragging about the dopeness of their wordplay and how much everybody else sucked on "The Way of Rhymes" (Jermaine Dupri wrote all their lyrics as well as producing the album) it's a pretty fresh track with a sweet beat change halfway through to the same "More Peas" loop that Organized Konfusion rocked on "Fudge Pudge." I dig it. "Party" is one of those stereotypically hip-house tracks from the late 1980's and early 1990's that if you grew up around this time now feels warmly nostalgic in retrospect. "Can't Stop the Bum Rush" unapologetically samples so many classic breaks I won't even break them all down, but the clearance price would be too high to pay by modern standards. "Lil' Boys in Da Hood" may be my favorite though. Even if Dupri was ghostwriting their raps the track is surprisingly mature for a group marketed for their youthful appeal. The song even samples Ice Cube on the hook to reinforce the song's title!

"On the co'ner it's the one they call Daddy
Watchin all the players as they roll in the Caddy
That's my everyday scenery
Little kids with beepers, gold chains, ain't nuttin new G
-- Well I'm the Mac and it's like that where I live
-- Brothers get shot tryin got stay positive"

Even if you want to give 80% of the credit to Jermaine Dupri as the producer and the ghostwriter, you still have to give it up to Daddy and Mac for having the moxie to deliver the lines with authority. They actually had some talent at rapping even if it wasn't at writing said raps, but by the time they matured enough to be taken seriously on their third album with tracks like "Tonite's Tha Night" Dupri was STILL controlling every part of their presentation in front of and behind the scenes. That too had to influence Chris Kelly's downfall, because intentionally or not Dupri was eroding his confidence by not giving the group creative control even as their popularity waned and album sales fell. Would it have hurt to see what they could have done on their own now that they were no longer in the Another Bad Creation category? That fourth album has been lost to all time and it might actually be "Bad" without Dupri's influence but unless someone finds it we'll never know. Even though every part of this album screams "do it because Dupri said so" and the best versions of the singles are missing "Totally Krossed Out" still KINDA works. If they re-released this CD with all of the better remixes and single versions I could easily give it an unqualified thumbs up, but to paraphrase their rap "Warm It Up" it only gets one finger (WHAT FINGER) - the middle. It could have been so much more. RIP Chris Kelly.